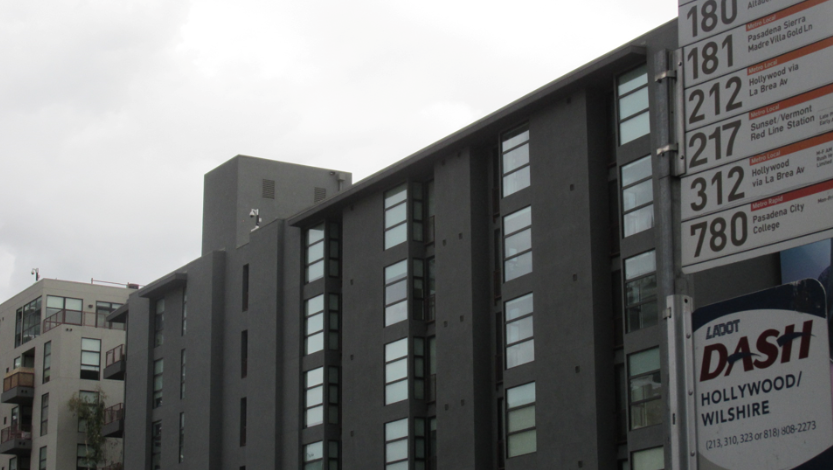 VOICES-There are plenty of people in LA who want to see housing costs come down. Anybody who's renting an apartment or looking to buy a home in the area has felt the sting of sky-high prices.

We've heard all sorts of solutions proposed by everyone from tenant advocates to well-known economists, and recently former LA Times City Editor Bill Boyarsky joined the debate, airing his views in an op-ed.

The way Boyarsky sees it, the people of LA need to shift from a NIMBY (not-in-my-backyard) to a YIMBY (yes-in-my-backyard) frame of mind. The op-ed lamented the political power held by LA NIMBYs, and praised the new YIMBY movement, touting the idea that upzoning near transit could solve our problems. Boyarksy went on to voice his support for SB 50, a bill proposed by State Senator Scott Wiener that would override local zoning near transit to allow more dense development.

Boyarksy's heart is in the right place. Even though he owns his own home, he sees how hard it is for young people to find housing that they can afford, and he believes the YIMBYs have hit on the solution. Unfortunately, Boyarsky is embracing a simple fix that sounds good instead of looking at the actual facts.

Let's start with the idea that we can make housing more affordable by upzoning large swaths of Los Angeles. The YIMBYs argue that it's a simple matter of supply and demand, and LA's current zoning is too restrictive. They say that if we just offer generous density incentives to developers, they'll ramp up residential construction and solve the housing problem for us. What they don't seem to realize is, when you upzone to allow greater height and density on a parcel, that automatically increases the value of the land, and drives real estate prices higher.

You want some examples? In 2012 Champion Real Estate paid $9.2 million for a site located at 1718 Las Palmas in Hollywood. Champion submitted an application to the City for an apartment project consisting of 224 units, which was well beyond what the zoning allowed. But because the developer offered to designate 11% of the units as very-low-income housing, the City approved a 26-foot increase in height and a 35% increase in allowable floor area ratio. This probably sounds like a good deal. Champion would get to build over 200 new units, and some of them would be reserved for low-income households. Isn't that a win-win situation? Actually, no, because the developer didn’t build a damn thing.

In 2016, Champion flipped the property, selling it to real estate heavyweight Jamison Services for $23.3 million. In other words, Bob Champion’s company raked in $14 million over the purchase price after getting the City to upzone the property. Champion Real Estate had already done this once before in Hollywood, buying a number of parcels at Selma and Highland for $20 million in 2011. The developer asked for a zone change, a height district change, and increased floor area ratio, all of which the City granted. Four years later Champion sold most of the parcels to Mill Creek for $39 million, nearly doubling their original investment.

These are just two examples, but it's a common practice. Numerous real estate investors have found they can make a bundle by buying property, getting it upzoned, and then flipping it. It’s a great deal for investors, but not so great for the folks who need housing, because ultimately, they’re the ones who end up paying for those profits. Champion Real Estate pocketed over $30 million on those two deals. Don't think for a minute that the companies that actually build those projects will absorb the high cost of the parcels they bought. The exorbitant purchase price will be passed along to future tenants in the form of exorbitant rents. In effect, Bob Champion is filling his pockets at the expense of the people who are going to inhabit those buildings.

So the idea that Scott Wiener is going to solve our housing problems by radically upzoning thousands of parcels near transit doesn’t make a whole lot of sense. If the legislature approves SB 50, the value of those parcels will skyrocket overnight. If, in a few months, it looks like SB 50 is on its way to becoming law, California will see yet another speculative land rush. Real estate investors will be scouring neighborhoods in LA, San Francisco, and beyond, looking to snap up land near transit so they can cash in after the bill passes. Real estate prices will soar even higher, and a good part of the profits that investors realize on the increase in value will be paid for by renters and buyers in the form of higher housing costs.

But what about the environmental benefits? Doesn’t it make sense to add dense residential development near transit so that we can get people out of their cars? That certainly sounds logical, but the promise is a long way from the reality. In fact, the City of Los Angeles has been talking about transit-oriented development (TOD) for at least 15 years, and during that time has approved thousands of new units in dense residential projects near transit. So why do Metro’s stats show that transit ridership is lower than it was 30 years ago? In 1988 the number of systemwide boardings was about 430 million. In 2018 the number was about 391 million.  By end of 2018, Metro had racked up five straight years of ridership losses.

And let’s get specific here. The Department of City Planning has approved a few thousand new units along the Red/Purple Line in the last 15 years, claiming all the while that this will result in increased subway ridership. Dense new apartment buildings have gone up near Red Line stops in North Hollywood, Hollywood, Koreatown, and Downtown. In spite of this, ridership on the Red/Purple Line has dropped from 47,434,969 in 2010 to 43,301,200 in 2018. Or maybe we should just focus on Hollywood, where around 2,000 new units have been built on or near Hollywood Blvd. Has that led to increased ridership on the bus lines that serve the area? Nope.

In praising the YIMBYs, Boyarsky argues that NIMBYs have too much power. There are a couple problems with this. In the first place, while pro-growth advocates proudly claim the YIMBY name, you won't find too many folks who call themselves NIMBYs. In LA it used to refer to entitled white homeowners who would fight any project that could impact their neighborhood, but in recent years the term is thrown around much more loosely. YIMBYs use it to refer to anyone who opposes any housing project. Are you worried new development could put a strain on local police and fire resources? You're a NIMBY. Afraid a new housing complex will mean the loss of rent-stabilized housing? You're a NIMBY. Are you fighting a project because it means the demolition of a historic building? You're a NIMBY.

The term NIMBY has become an easy way to label anyone who voices reservations about a proposed project, but the YIMBYs have also drawn a certain amount of criticism. They learned some hard lessons last year when they were pushing for a previous Wiener bill, SB 827, that also sought upzoning near transit. They apparently didn't realize that low-income communities of color feared radical upzoning because it would mean an increase in gentrification and displacement. To their credit, some YIMBYs acknowledged the concerns these communities voiced. Unfortunately, others chose not to listen. There was a particularly ugly moment when members of a YIMBY group shouted down tenants from communities-of-color at a rally in San Francisco. This didn't win them any friends.

The other problem with Boyarsky's complaint about local groups that wield political influence is that he doesn't even mention the huge influence that real estate investors have on shaping planning decisions. If you've been paying any attention at all to development news in LA over the past decade, it should be abundantly clear that there's a strong correlation between campaign contributions, high-powered lobbyists, and project approvals. While no charges have been filed yet as a result of the FBI's investigation into wrongdoing at City Hall, the revelations about the activities of Councilmember Jose Huizar and former Garcetti staffer Raymond Chan have shown that Downtown power brokers aren't shy about asking developers for cash, and developers aren't hesitant about forking it over. Groups that stand to benefit from new development have been generous to Sacramento lawmakers as well.

Scott Wiener has received tens of thousands of dollars in campaign cash from companies and organizations in the real estate and construction sectors. And Governor Gavin Newsom's campaign coffers were flush with contributions from executives at Hudson Pacific Properties, Related California, and Rising Realty Partners, as well as the California Association of Realtors. Real estate interests spend huge sums to help candidates get elected and spend still more on lobbyists to woo them once they're in office. It seems strange to complain about community groups having too much power without even acknowledging the power held by developers with deep pockets.

It's a mistake to believe that high housing costs are due solely to lack of supply. Prices for apartments and condos are rising in cities all over the US, even where new construction is booming.  New York City has been building tens of thousands of new units annually, and yet housing prices are higher than ever. The pace of residential construction in Dallas is blistering, but in spite of that the price of the average home went up 58% between 2010 and 2017 according to data from Texas A&M. And how do the supply siders explain the situation in Vancouver and Toronto, where housing costs are sky-high even though thousands of condos sit empty?

The main driver behind high housing costs is real estate speculation. Over the past 15 or so years a tidal wave of cash has flooded urban markets around the world, with investors looking to realize the highest rate of return as quickly as possible. With interest rates at historic lows, investors have been pouring cash into housing, where they can get a return-on-investment of 15%, 20%, or more. And this, of course, has drawn an increasing number of players into the game. Those who understand how to play it can do quite well for themselves.

Given the scope of the affordability crisis in California, it's understandable that people are ready to embrace simple, sweeping "solutions" like SB 50. It sounds like it makes sense. Economists tell us it's all about supply and demand, so if we just build a lot more housing, prices will come tumbling down. It's hard to blame Bill Boyarsky for embracing a "fix" that politicians, developers, and many academics have said will strike a blow for more affordable housing. But SB 50 won't solve our housing problem, because Scott Wiener doesn't understand what the problem is. Wiener apparently doesn't even realize that upzoning thousands of parcels across the state will push property values higher than they already are.

To those who struggle to rent or buy in today's market, housing prices may seem like a fire that's burning out of control. Don't make the mistake of thinking that SB 50 will put the blaze out. Passage of the bill would be more like dousing it with gasoline.

(Casey Maddren is President of United Neighborhoods for Los Angeles (UN4LA), a community group advocating for better planning, and a CityWatch contributor.) Prepped for CityWatch by Linda Abrams.