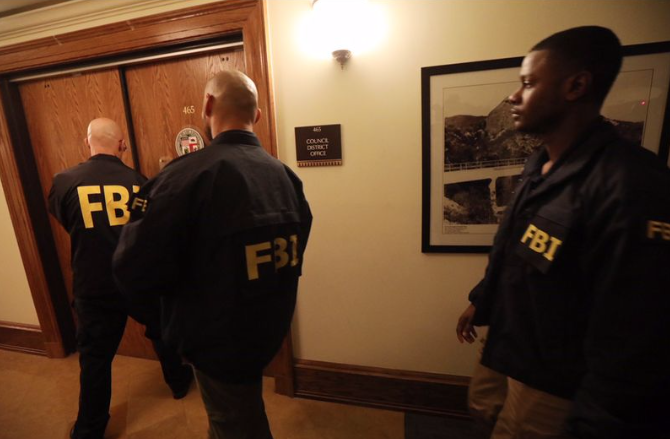 CORRUPTION WATCH-While everyone is all atwitter about the FBI’s investigation of Councilmember Jose Huizar and few Chinese, let’s take some time to ponder the FBI’s possible end games. Who thinks that after all these years, the FBI intends to stop Los Angeles corruptionism?

Back on Friday, October 22, 2010, LA Weekly, ran the story “Richard MacNaughton Draws A Bead on Eric Garcetti,”  by Jill Stewart. She wrote:

“Now, attorney Richard MacNaughton wants ... the Federal Bureau of Investigation to open a criminal probe of City Council doings involving a hunk of land at 1601 Vine Street, calling it "a $1.3 M swindle ... definitely in the felonious range."

Although various people had dumped the evidence on the FBI, and Ron Kaye in addition to LA Weekly and City Watch wrote extensively about Garcetti’s role in the “cesspool on Vine” corruption, the FBI saw, heard and spoke no evil.

Later, did the FBI care when the felon Juri Ripinsky, who was one of Garcetti’s fundraisers, got unanimous city council approval for the giant Paseo Plaza project in Hollywood despite the fact he had served two years in Leavenworth for real estate and bank fraud? Shall we ignore allegations of insurance fraud? Perhaps the FBI has no data base for federal felons. Now CIM has the Paseo Plaza project.

Speaking of CIM, what about Garcetti’s best buds at CIM Group which was 86ed from Israel’s mega Deleck real estate deal due to CIM’s ties to corruption? Where did the corruption which worried the Israel government occur? Right here in LA City Hall. CIM Group is also in bed with Jared Kushner’s real estate deals in New York.  That puts Garcetti closer to Trump’s White House than Roger Stone puts Trump close to Russia.

In June 2013, the LA County Civil Grand jury found hanky-panky in Garcetti’s downsizing of the LAPD. Did the FBI care? Nope. Even USA Today wrote an exposé.

What about Garcetti’s downsizing the 2-acre Hollywood fire station to ½ an acre? Did the FBI care? Nope.

All Corrupt Regimes Use Show Trials

Has a corrupt government ever not engaged in show trials to divert the public’s attention away from itself?  Let’s step back and look at what’s going on.

Paying the extortion money to the PLUM Committee guarantees nothing – unless the LA City Council is an established criminal enterprise.

Here’s how The Criminal Enterprise Works

Everyone except the FBI knows about the city council’s criminal vote trading system. Bribes are paid for results. The Chinese are not coughing up millions of dollars in hopes that a majority of the councilmembers will vote for their horrid projects. They know that the City Council unanimously approves every project due to the council’s vote trading system. Any project placed on the city council agenda must receive only “yes” votes. That way each councilmember has traded his or her yes vote in return for others’ yes votes on his or her projects. Penal Code § 86 criminalizes all vote trading.

Here’s the Wrinkle in that Corruptionism

Not all districts have equal opportunity for mega projects and the Vote Trading System faces objections from councilmembers without mega projects. It appears that the PLUM Committee is the distribution center for the bribes. That feature first appeared with Samuel Leung’s Sea Breeze project where it was revealed that he was paying off councilmembers in the North Valley. It seems that pay offs to Garcetti’s charity are also routine, $125 K from Rick Caruso, $60 K from Samuel Leung, etc.  Apparently, only the FBI does not understand that it is bribery when money is paid to a third party to obtain the official’s action.

Could it be that Huizar and Price became the greedy gate keepers at PLUM and were not distributing the bribes in a fair and equitable matter? The cheated crooks on city council then had the gall to call on the feds to enforce “proper” bribe sharing. Or, was it something else?

Could the FBI Be After the Entire City Council?

Every city councilmember has participated in tens of thousands criminal vote trades. With a maximum penalty of four years per unlawful vote, Garcetti alone racked up more than 10,000 years of prison time. If Garcetti served time backwards, he could say hello to Gilgamesh and Enkidu.

Here’s what today’s tea leaves say will happen: The FBI will find that the Chinese paid Huizar and a few other people to get some projects through the PLUM Committee. There will be indictments, and then the FBI will walk away. The FBI will never, ever, go the next step and ask, “Why would the Chinese pay so much money to get through PLUM without a guarantee that their projects would be approved at City Council?” We all know the answer: Garcettism.

The Cleansing the Eric Garcetti’s Corruptionism

The more ominous tea leaves say that we are seeing an opening gambit in Garcetti’s Presidential Campaign where the FBI comes to town to do a faux investigation. They arrest Huizar and maybe one or two others; they praise Eric Garcetti for his vigorous fight against corruption and then close down the investigation while people dance around Garcetti singing Hosannas. Next stop, Iowa.