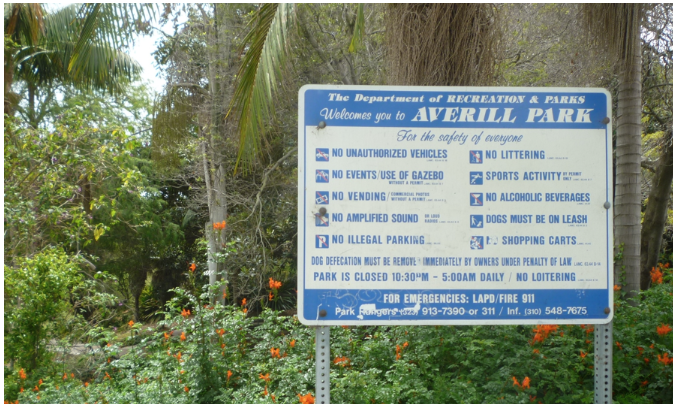 GUEST WORDS--A small group of parents and children were enjoying an impromptu visit to Averill Park in San Pedro.

The kids, playing on a grassy hill, laughed and ran while the adults sat nearby on beach chairs. A man with a yellow vest and a Los Angeles Recreation and Parks (LARAP) badge walked through their belongings and approached Monica Sabic Weston.

"Do you have a permit to be at the park?” he asked.

“No,” replied Weston, wondering why she was being asked to pay to be at a city park.

“This looks like a party, you need to pay,” he stated.

He was holding a clipboard with pieces of paper on it. Weston was not hosting an event and refused to give the man her information or money. After the encounter, Weston took to social media in frustration where others shared similar stories.

There were multiple posts about being harassed at Averill Park by the same man, a Park Monitor. A video showed him circling the park “like a shark” in a city car. When he spots people using the picnic tables or gathering on the grass in a group, he moves in. A man on the thread posted that the Monitor approached his family while they were having a small family birthday party. He wanted money on the spot and said that man’s camera was not allowed either because it looked professional. He was taking pictures of his wife’s little cousin. Others posted photos of the Park Monitor asleep in a city car. With no signs posted regarding permits or fees at the time, some park visitors paid while others refused.

This public park was now becoming like a private country club with expensive fees just to sit at a table. Throughout San Pedro, other city parks and beaches have no Park Monitors notably at Cabrillo Beach which is also maintained by the City of Los Angeles Recreation and Parks. In that area, neighbors are consistently dealing with large groups holding loud parties without permits and no LARAP staff to oversee any of it.

Averill Park is located in a quaint neighborhood known as Vista Del Oro in San Pedro. With a canopy of trees, the park has been a favorite of the community for over 100 years. The park features a meandering pond divided by a bridge with crawfish, ducks, geese, and a waterfall. A pathway lined with roses leads to a gazebo on top of a hill. Large trees with intrinsic roots weave in an artistic formation above ground and Jacaranda Trees bloom with thousands of purple flowers. A grassy rolling hillside is known for ice sliding. Large ice blocks are brought to the park and used to sit on while sliding down the hill, an ode to old fashion fun.

Large crowds arriving by limos and buses have created problems in the park and surrounding neighborhood. The park in years past has been impacted by graffiti, parking issues, vandalism, the destruction of vegetation and the brutal killings of ducks. The only small bathroom in the 10-acre park is located up a steep hill with stairs. People using wheelchairs or parents with strollers are out of luck if they need to use a restroom.

Now the park is well maintained with the eyes of local neighbors seemingly always on it for a quick call to Recreation and Park’s supervisors if things seem array in any way. In 2009, Quimby Funds were used to make improvements to the aging park. Since then the influential neighbors have worked to preserve the park understandably. Ideas about who can utilize the park and the tables were initially established to protect the park.

Recently rules have seemed to turn Averill Park into a pay to play venue even for visits by families. If the Park Monitor believes visitors are celebrating anything or holding an event, they have to pay. According to the local Recreation and Parks office, all picnic tables at Averill Park are by reservation for groups of 20 or more and cost $97. However, the Park Monitor has tried to collect funds for smaller groups. A spur of the moment gathering on the park’s picnic tables is prohibited without prior reservations that have to be paid at a district office at another location during the week. A balloon is a sign of an event and will trigger a possible fee or a closer examination by staff. The exact number depends on who answers the phone at the office.

Andrea Stammreich’s 8-year old daughter’s Girl Scout troop walked across the bridge at the park as part of a Scout bridging tradition. She planned to celebrate with cupcakes after the short ceremony. That was until the Park Monitor demanded that she pays for the girls to walk over the bridge and for the table she used for the cupcakes. The Park Monitor wore gloves, had no name badge and made Stammreich uncomfortable. He walked off but came back during their ceremony asking for the money in front of all the girls and parents which seemed to Stammreich like an effort to embarrass them.

For their next bridging ceremony, Stammreich decided to combine the event with other troops to save on the park fees. Troop funds raised by the girls were used to pay for the park fees. It took numerous unanswered calls to LARAP and visits to their offices at another location to complete the paperwork and pay for the permit. On the day of their ceremony, the Monitor lurked nearby and instructed the troops to leave earlier than their permit stated. He also told Stammreich that they were in the wrong place and needed to move. Stammreich had a map and knew she was in the right area. When fathers of the Girl Scouts stepped up, the Monitor finally backed down.

It is not only the lack of clear guidelines and high fees that are of concern to community members, but the management of money and permits is also questionable at Recreation and Parks. Weston also obtained a permit to have a small event at Harbor Regional Park, also managed by LARAP, for her non-profit agency. She did not receive a refund of the required $600 deposit from LARAP until a year after her event. Gauging residents with high fees is not new to LARAP. At parks in Torrance, picnic tables are free and on a first come first serve basis. Only groups of 25 or more are charged $1 a head for residents which is four times the amount compared to LARAP. For a child to play on a volleyball team in San Pedro with LARAP, the fee is $135, but in Torrance, it is $69. In Long Beach, youth sports teams are free except for a $10 charge for a t-shirt. Both Long Beach and Torrance have a large selection of classes for children, adults, and seniors at their parks. In San Pedro, classes and sports are sparse and much more expensive.

While the monitor focusses primarily on Averill Park, he can be seen patrolling Peck Park on occasion. For 30 years, Carol Stamper and her family set up chairs and tables for a pre-Easter lunch on the grass in the back of the park. She was shocked when the Monitor showed up and charged her $97. They had their own tables and chairs, and the park was deserted. She gave him a personal check for the use of one trash can.

Only certain parks receive the attention of a park monitor while others do not, there is no equality unless you are an influential neighbor it seems. At Cabrillo Beach, a grandfather paid for a permit to have his grandson's party at the picnic tables under the trees. When he arrived to set up early on a Sunday morning, a large group from a church had taken his tables. They did not have a permit and were using an amplified sound system that was heard for blocks. The church told the grandfather that he would have to make a donation to them to be able to use the tables he paid to permit. There was nobody to help him because Cabrillo Beach has no staff that deals with permits on Sundays. Yet across town at Averill Park, a group eating at a picnic table is harassed to pay $97.

Posted information about permit fees should be visible to park visitors with online payment options available. Monitoring of all parks and beaches should be consistent, not just at select sites. At Averill Park, a man on a blanket who is doing drugs in the park will get a three-day notice to vacate the area and charged no fees. A group with a cake and a balloon at the same park is asked to pay a fee or leave immediately.

After this original story was published, signs with a phone number for permit information have been posted near the picnic area. Recreation and Park staff insists that the Park Monitor only approaches groups of 20 or more who are at the picnic tables without a permit or have a moon bounce without insurance.

Councilman Joe Buscaino’s staff were made aware of the issue and stated that they were looking into it.

(Jennifer Marquez is a writer living in San Pedro. She has worked in social services for over 23 years. A Version of this story was originally published in the October 2018 Issue of San Pedro Today Magazine. www.sanpedrotoday.com.) Prepped for CityWatch by Linda Abrams.