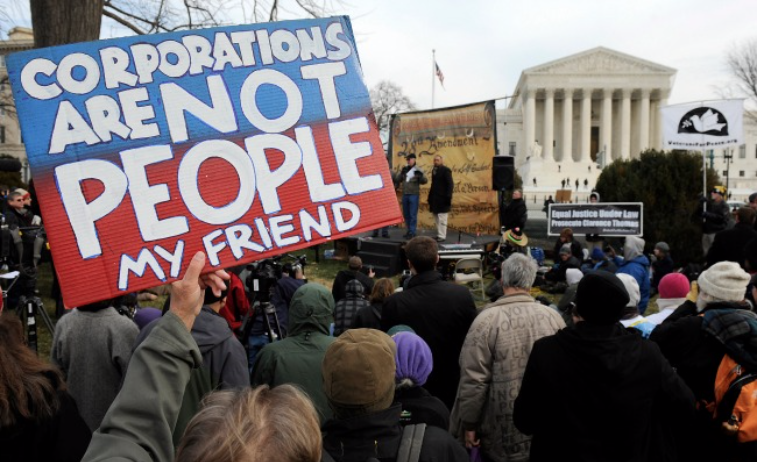 EASATSIDER-By the time you read this post, the election will be over, and whatever the result, our democracy will stagger forward.

In one area, however, the putrid odor of money has permanently tainted the system -- corporate slush money, to be exact.

As I was watching the millions of dollars of PAC money being used to flat-out lie like a rug so the large corporations could defeat reasonable propositions in this week’s election, it came to me in a flash!

The U.S. Supreme Court is perfectly happy to allow unlimited money from immortal Corporations to be used to get their way at the polls and overwhelm any rational pretense of democracy. Think PACs. On the other side, we have frail, very mortal individual people who don’t stand a chance against them.

Witness Proposition 10, which would have eliminated the Costa-Hawkins Rental Housing Act and allow local jurisdictions to adopt their own rent control systems, if they choose. As Capital & Main notes:

“However, topping the list of No on Prop. 10’s big donors are some of the country’s largest landlords — many funded by Wall Street investment dollars — whose bottom lines could be negatively affected by Prop. 10’s passage. The No campaign’s $65 million war chest is more than two-and-a-half times as much as the $25 million raised by Prop. 10 supporters, according to the California Secretary of State’s office. A significant amount of the No funding comes from large, publicly traded real estate investment trusts like the ones highlighted on a recent tour held by tenant activists in downtown Los Angeles.”

Witness also the race for California Superintendent of Schools, where $20 or so million dollars has been used for character assassination and whopping lies about one candidate, Tony Thurmond. It’s all Billionaire Boys Club money being used to put their fake Charter School Front (Marshall Tuck) in Office.

The Intercept had a good article on this November 1, called “How the Charter School Wars Turned an Obscure Race into California’s Second Most Expensive Election.”

“Tuck, a second-time candidate for the position who has never held elected office, has received endorsements from the San Francisco Chronicle, the San Jose Mercury News and the San Diego Union Tribune, among others. He’s is backed by the charter school movement, which has spent close to $30 million in support of his campaign. Three individuals alone — real estate developer Bill Bloomfield, Gap co-founder Doris Fisher, and venture capitalist Arthur Rock — have given a combined $11 million.”

Both campaigns may well have been successful by the time you read this article, although I give Tony Thurmond a decent shot against “the great pretender” Tuck. Laws and elections for sale, is what it boils down to, and all because of a U.S. Supreme Court decision.

It seems to me there are a few lessons to be learned from all these events. One is that the Supreme Court has no particular interest in democracy for the ‘little people.” You know, the 300 million plus regular humans like you and me. But they can get real worked up over one dollar one vote, getting rid of bothersome public sector Unions, and government mandates over Affordable Care Act contraception.

The Atlantic has a good article on the Supreme Court’s deification of Corporate Personhood:

“Some rights, though, are more appropriate for people than for corporations, particularly when the nature of the right does not “fit” with the corporate form, or the corporate form magnifies the nature of the right beyond what humans would have. Religious rights, for example, should be different for corporations because only humans have consciences. Rights to spend money in elections should be different for corporations because the benefits they receive from the government give them an improper advantage in influencing government policy.”

And underpinning all this, as the Huffington Post noted:

“Ever since Citizens United, the Supreme Court’s 2010 decision allowing unlimited corporate and union spending on political issues, Americans have been debating whether, as Mitt Romney said, “Corporations are people, my friend.” Occupy Wall Street protestors decried the idea, late night comedians mocked it, and reform groups proposed amending the Constitution to eliminate it. Today, however, the Supreme Court endorsed corporate personhood — holding that business firms have rights to religious freedom under federal law. Not only do corporations have rights, their rights are stronger than yours.”

For a good analysis of Citizens United and the explosion of PACs and SuperPACs, check out an article by The Center for Public Integrity and how all of this fits together.

I have written previously on the Corporate Supreme Court in a somewhat cynical manner.

“The Court’s idea of the 1st amendment is Citizens United. You know, one dollar one vote, where immortal corporations have the right of free speech to spend as much money as they want to rig our elections. Where the 1/2 of 1% of uber rich can pop a few million, or lots of millions, into bizarre entities called PACs, and determine who gets to play Mr. Smith Goes to Washington.”

This is the same Supreme Court that decided that employees no longer have the right to band together collectively to sue their employers in a class action lawsuit (Epic Systems Corp. v Lewis).  All this after they had decided that Corporations can force you and I to go to mandatory arbitration in a rigged system that the companies control, and you and I pay half the costs for the $500/hr. retired judge who will rule against us. Sigh.

The Supreme Court is supposedly one of the three “adult” institutions in our society, the other two being the Senate and the Federal Reserve. The theory is that they can rise above politics and work together to chart a middle course for our nation. Sure.

I was amazed to find that it’s still available on Amazon. It’s an excellent read for those of us who are Pollyanna enough to believe that the Court system can be equitable.

The thesis of the book is that, if we are to believe the Court, they should at least be able to make their decisions “intelligible.”

For a topper, check out the convoluted decision-making abilities of the Justices below:

Absent taking a hallucinogenic drug, there is no way that “The Supreme Court’s Obligation to Maintain the Constitution as Something We The People Can Understand” is met. This quote, by the way, is the subheading of The Intelligible Constitution.

The reason this is important is simple. If the biggest adult safeguard to our judicial system is no more than a bunch of squabbling 5-4 split concurring and dissenting decisions, then the truth is that all the Supreme Court really is, is a collection of political ideologues. Unintelligible Political drivel.

And if that’s the case, our entire judicial system is in deep kaka.