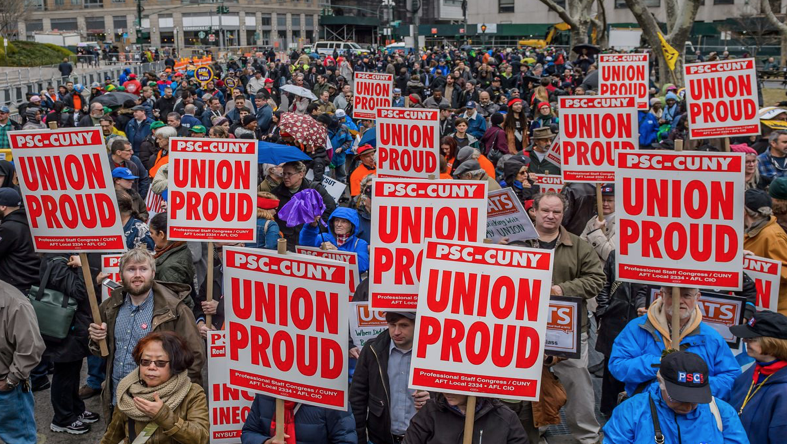 EASTSIDER--Writing decisions over matters they know nothing about is simply part of the job description of a Supreme Court Justice.

But sometimes the ideological mindset of the majority clearly demonstrates the fact that a decision has absolutely nothing to do with the law. It has to do with a visceral antipathy towards a group of Americans acting in concert. Like Unions. Such a case is Janus v. AFSCME, which you can find here.

Truth is, the vast majority of Americans all have opinions about unions which have been formed through decades of second hand propaganda, rather than personal experience. This trend increases as fewer and fewer Americans are covered by any collective bargaining relationship.

Here’s the goofy part.  There is no current existential crisis in public sector labor relations. In fact, the system is working well.   We have mature collective bargaining in California, with good oversight, mostly labor peace, lots of multiyear agreements, and a grievance and arbitration system which works for all parties up and down the State. I am told the same is true for the rest of the Nation.

So, let’s take a spin into reality, and see how all this played out, before you read a headline and give a Pavlovian response about ‘unions bad’ or ‘unions good’ based on decades of unremitting propaganda.

Having the fortune to have lived a relatively long time. I witnessed the heyday of private sector unions and their demise, largely through court cases, and at the same time, participated in the astonishing growth of public employee unions, principally from the late 60’s until the animus of the Courts majority was just unleashed in the Janus case.

In California, collective bargaining for public employees was actually illegal until the late 1960’s.  It was the time of the House Unamerican Activities Commission (HUAC), loyalty oaths for public employees (Hatch Act), and a public servant absent without approval for over 3 days was automatically terminated.

It was also the 1960’s, a time of a great social change which came into full force in places like Berkeley in the late 60’s, fueled by a stupid war and an even stupider military draft just for Vietnam. Proof our institutions are prone to failure.

In Sacramento County in the mid-60’s, the Social Workers went out on strike, were fired, got replaced, and eventually all the strikers were fired.  A year or so later, the Social Workers went out on strike in LA County and were also fired.  But there, nobody wanted to be a Social Worker, particularly in Watts, and the County eventually caved, making a deal with SEIU to end the strike and get everyone back to work.  Of course, the elected officials later reneged on the deal, but no surprise there.

There were a lot of public sector strikes up and down the State.  Finally, in late 1969 LA County adopted a labor relations Ordinance, and faced with the growing number of labor disputes, by 1970 the State of California adopted the Meyers-Milias-Brown Act for public sector labor relations.  I know this because I was there.

By the mid-seventies, most California public agencies had contracts with their employees, even as unionization in the private sector was on the decline.  The death knell for a lot of private sector Unions sounded in the 70’s when vulture capitalists like Carl Icahn took over most private sector companies, raiding their pension plans to finance the hostile takeovers, gutting the companies, and dumping their carcass and the workers in the trash.

In California, between AFSCME & SEIU, they organized jurisdictions covering something like 60,000-80,000 employees in less than 4 years.  It was a true social phenomenon, and while I’m personally only familiar with California, this change was repeated on a national scale.  Scared the hell out of the anti-union crowd, and for that matter, most politicians.

The Issue of Union Fees

In California, folks mostly don’t know that the original Meyers-Milias-Brown Act did not provide for any form of Union dues or fees.  In the late 60’s, that idea was simply too radical, and everybody knew that the law would never have passed the legislature if it contained any type of mandatory union dues or fees.

Over time, of course, California became more comfortable with the reality of public sector unions, and we wound up with provisions for what is called an “Agency Shop”. The idea is not particularly radical. Since the unions, by law, have to bargain for and represent all employees in a bargaining unit, whether or not they belong to the union, there is an equity argument that they should be able to collect a ‘fee’ from non-members roughly equivalent to the percentage of dues directly attributable to that representation.

This process took place on a national level over time, as public-sector unions became entrenched even as private sector unions were largely destroyed by the shift away from lifetime employment with a single employer, the destruction of their pension plans, and the restructuring of corporate capitalism to preclude lifetime employment with any company.  Needless to say, the US Supreme Court merrily presided over these changes.

However, it is only in recent decades that public sector unions had enough resources (money) to have a serious political impact in elections.  Institutionally, their impact in local, state, and even federal elections ultimately became serious enough that the 1/2 of 1% of our country who actually run the whole shebang started to freak out.

That’s what the series of state and federal court cases covering public sector unions are really about. They are not about the 1stamendment or the law. They are about huge institutional interests who are worried about their right to run the economy as they see fit, without being worried that there are any contrary institutional interests who have enough money to play at the table.

The US Supreme Court

I find the discussion about the Courts Justices as ‘liberal’ or ‘conservative’ as laughingly naive.  I don’t think there’s been a hard core progressive on the Supreme Court in my lifetime, and doubt that it’s ever going to happen.

First, by definition the US Supreme Court is designed to be the ultimate defender of authority and the status quo.  Incremental changes are ok over time, but the ‘rule of law’ must be maintained. Consider.  Our legal system consists of laws written by elected officials who are put in office by monied interests to maintain a tight grip on the laws of the Country.  And the initiative process requires large amounts of money to play, so forget it as a balancing force.

Those are the laws that the Court interprets. It is institutionalized conservatism by definition.

Second, nobody, and I mean nobody, is ever going to get through the process of being successfully nominated as a Supreme Court Justice who is actually a progressive. Just look at the Senate of the United States who has to provide ‘advise and consent’.  Ain’t gonna happen.

I’m not going to waste a bunch of time in legal analysis of any Supreme Court case involving Unions, because the very idea of unions and groups of real people bargaining collectively is essentially an anathema to our judicial system.  These cases have nothing to do with the law and everything to do raw naked politics.

The Court’s idea of the 1stamendment is Citizens United.  You know, one dollar one vote, where immortal corporations have the right of free speech to spend as much money as they want to rig our elections.  Where the 1/2 of 1% of uber rich can pop a few million, or lots of millions, into bizarre entities called PACs, and determine who gets to play Mr Smith Goes to Washington.

A system where the Court recently ruled that you and I do not have the right to get together as a group, called a ‘class’, and find a lawyer with the resources to legally challenge large corporations when they do bad things.  No sir, what you and I get is the ‘right’ to individually file for private arbitration, which is totally controlled by big law firms who hire their stable of retired judges to rule in their favor, and then send you and I the bill which will put is in bankruptcy.  Here’s a link to the case.

Having recently celebrated Independence Day from foreign interests, maybe just maybe we need a declaration of independence from the Court.