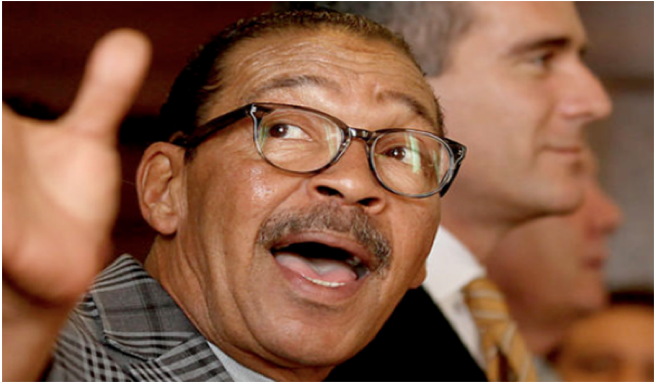 GUEST WORDS-At a time when freedom of speech and the right to protest are under unrelenting attack by the President of the United States,

the last thing we need is for the Los Angeles City Council to adopt an unprecedented prior restraint banning outspoken critics from attending future meetings. (Photo above: City Council President Herb Wesson.)

Under the proposed ordinance, anyone who "disrupts" and is removed from two Council or committee meetings within three days can be "excluded from attending" all Council and committee meetings for the following three business days. And if the individual "disrupts" another meeting within three days, they can be excluded from all City meetings for the following six business days. These persons would be banned from attending all City meetings of any kind, listening to the proceedings and speaking during the public comment periods, even if they did so peaceably and without disruption. Without a trial or any judicial review, regardless of any past violations, it would impose an unlawful gag order denying in advance their constitutional rights to freedom of speech, freedom of assembly, and the right to petition their government for redress of grievances.

The proposed ordinance clearly runs afoul of one of the oldest forms of government censorship -- the prohibition of speech before it is even uttered. Beginning in the sixteenth century with the advent of printing, popes and kings demanded that all printing presses be registered, and all books and pamphlets be approved in advance. One legal scholar called such prior restraints "a potent and unnecessary mechanism of government that can smother free communications."

In his authoritative Commentaries (1765-1769), William Blackstone wrote that "liberty of the press is indeed essential to the nature of a free state" and that "no previous restraints upon publications" should be imposed. "Every free man has an undoubted right to lay what sentiments he pleases before the public; to forbid this is to destroy the freedom of the press."

The oppressive nature of prior restraints was a prime reason the Founders adopted the First Amendment prohibiting laws that abridge freedom of speech and freedom of the press. A 1931 landmark Supreme Court decision struck down a Minnesota law which was used to enjoin The Saturday Press from publishing "malicious, scandalous, and defamatory" material in future issues. The Court rejected the injunction regardless of the fact that the newspaper had previously published nine issues filled with anti-Semitic attacks on city officials. And in 1971, the Supreme Court rejected President Richard Nixon's attempt to prevent the publication of the Pentagon Papers finding that such a prior restraint bears a "heavy presumption against its constitutional validity."

The proponents of the new LA ordinance claim they need stronger weapons to punish outspoken critics who disrupt Council and committee meetings shouting outrageous statements and engaging in disorderly behavior. But the City has already been admonished for using the vague notion of "disruption" to censor free speech. In 2013, a federal court found that, in violation of the First Amendment, the City had repeatedly banned two critics from speaking, not because they had actually disrupted meetings but because the City used the pretext of "disruption" to silence their harsh criticism of City policies and individual councilmembers. The court did so even though the critics used highly inflammatory rhetoric and profanity, at one point telling the Council that their policies were "fucked up." The court found that in the context of political debate, the profanity was a legitimate "intensifier."

The court went to great lengths to explain its reasoning. It is "unconstitutional to restrict speakers from making personal attacks in City Council meetings; it chills speech critical of elected officials, which is speech at the heart of the First Amendment.

In one of the largest cities in the world, it is to be expected that some inhabitants will sometimes use language that does not conform to conventions of civility and decorum, including offensive language and swear-words. As an elected official, a City Council member will be the subject of personal attacks in such language. It is asking much of City Council members, who have given themselves to public service, to tolerate profanities and personal attacks, but that is what is required by the First Amendment. While the City Council has a right to keep its meetings on topic and moving forward, it cannot sacrifice political speech to a formula of civility."

A critic, the court wrote, “may be a gadfly to those with views contrary to [their] own, but First Amendment jurisprudence is clear that the way to oppose offensive speech is by more speech, not censorship, enforced silence or eviction from legitimately occupied public space.” Citing Plato, the court warned that a "city that silences a critic will injure itself as much as it injures the critic, for the gadfly’s task is to stir into life the massive beast of the city, to “rouse each and every one of you, to persuade and reproach you all day long.”

The City has been warned and it should take these lessons to heart.

(Stephen Rohde is a civil liberties lawyer and author of American Words of Freedom and Freedom of Assembly. He represented the plaintiffs in the federal case discussed in this essay.) Prepped for CityWatch by Linda Abrams.

We Have Seen This Movie Before: The Fascists Have Arrived