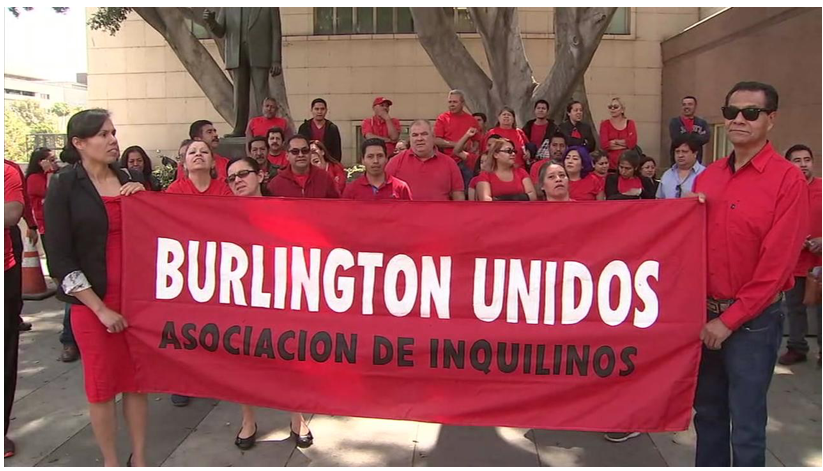 TENANTS’ RIGHTS-On one side there’s an ultra-rich landlord, a white woman with tens of millions of dollars in property that she inherited from her father, and who boasts a long history of slumlord-like abuse of her tenants.

On the other side is a group of over 80 rent-striking families -- 200+ people in total -- all Latinx, most of them recent immigrants from Mexico or Central America, courageously waging a struggle for dignified housing in one of the most rapidly gentrifying neighborhoods of Los Angeles -- Burlington Unidos, of Westlake.

Per a letter sent out to the tenants this past Friday (more on this below), LA City Councilmember Mitch O’Farrell has sided with Lisa Ehrlich, peddling her lies and telling the tenants there’s nothing he can do. Mitch further joins Lisa in demonizing LA Tenants Union (LATU) organizers, failing to understand that this fight is being waged primarily by the tenants themselves, who are simply fed up with indecent housing alongside skyrocketing rents, and choosing to fight back.

We’re not exactly shocked that Mitch has chosen Lisa Ehrlich’s side, even considering that she’s not a resident of his district. He has long been in the pocket of the real estate industry. A full 31% of the donations from his first campaign finance filing for his 2017 campaign came from the real estate industry (over 80% of these donations were the maximum amount), and Mitch enjoys the support of groups like the California Association of Realtors and the Apartment Association of Greater Los Angeles.

This is the same man who’s happily presided over, and at times explicitly encouraged, the urban cleansing of Echo Park and Hollywood, first as an aide to then-Councilmember Eric Garcetti, and now as a City Councilmember himself since 2013. Literally thousands of poor Latinx residents have been forced out of these neighborhoods over the last decade, a trend that will continue unabated without aggressive intervention from the city -- but Mitch can’t even get on board to support expanding rent control.

This loyalty to his propertied masters has resulted in gross anti-immigrant politics, evidenced by both his spurning of the Burlington residents and his recent attacks on street vendors -- his office has pushed the city to establish a “bulky item special enforcement zone” in a trendy section of Hollywood in order to please property owners and businesses.

But it’s not really accurate to claim that Mitch hates immigrants. Rather, he hates poor people, and more specifically, anyone that gets in the way of gentrification and rising property values.

The struggle for a 15-minute meeting

The Burlington tenants and LATU supporters had been emailing and calling Mitch for months, to no avail. All that the careerists that staff his office would tell us is to submit reports to the housing department, which the tenants had already been doing. They refused to meet with us and ignored invitations for Mitch to speak at our press events. Above all, we wanted some public support from Mitch for this fight for justice.

We had to literally occupy his office just to get a face-to-face meeting -- and even then, all Mitch could spare for 200+ constituents on the brink of homelessness was 15 minutes.

Mitch spent the better half of this meeting criticizing the tenants for their struggle, telling them they should’ve never gone on rent strike because the city’s agencies can help them, ignoring the recent victory by the Mariachis in Boyle Heights. Pure naivety and condescension!

Only after one of the tenants and her daughters essentially told Mitch to “stop bullsh*tting us,” and asked if he supported them, did Mitch say he’d reach out to Lisa Ehrlich to see what he could do. But he still refused to offer any public support.

He would rather the tenants quietly accept unjust rent increases and slum conditions than fight back.

Mitch sides with Lisa Ehrlich while peddling her lies

This past Friday Mitch finally sent a letter to the tenants updating them on what he’s been doing to help. He had a short meeting with Lisa -- though it’s unclear if it was in-person or on the phone -- and has decided there’s nothing further he can do.

Mitch’s letter is strikingly similar to a recent press release sent out by Lisa Ehrlich’s side. Below we have reproduced selected quotes from each.

“We never wanted to begin the eviction process against any of these residents,” said spokesman Robert Thaler of FML Management. “But when the attorney and tenant union directed residents to stop paying their rent in March we had no other option but to start the eviction proceedings. ... We hope that the other tenants who are still being directed by the tenant union ask tough questions of the attorneys and union leaders who are telling them not to pay their rent, so the tenants understand the consequences of that choice.”

“[Ms. Ehrlich] doesn’t want to see people evicted and wants to continue renting to those residents on strike. … Those tenants interested in in staying at the Burlington Apartments should contact the property manager directly and pay back rent for the missed payments. … It is further complicated by the fact that a choice was made to stop paying rent back in March.”

He blames the “rent strike” (he puts these words in quotes) for making this a legal matter in which he cannot intervene -- as if there’s a law preventing him from publicly supporting Burlington Unidos.

He says Lisa has not raised rents “in nearly a decade despite increased operating costs” -- a claim we know for a fact to be untrue. The year before this, every single tenant was hit with a $100 rent increase. Most have had their rents steadily increased, almost every single year, since 2010.

He says Lisa “doesn’t want to see people evicted” -- despite the fact that she literally chose to evict the Tambriz family two weeks ago, knowing that such a move would severely damage potential negotiations between the two parties.

Mitch has made his bed, and now he’ll have to sleep in it, all while dealing with our powerful tenants’ movement rapidly growing in both numbers and militancy.

(The Vermont and Beverly (VyBe) Local chapter of the Los Angeles Tenants Union helps tenants organize and fights for housing justice in the VyBe neighborhood. They meet on the 1st and 3rd Thursday of every month at 6:30 pm. For more information, check out: https://www.facebook.com/VybeLocal/)   Prepped for CityWatch by Linda Abrams.