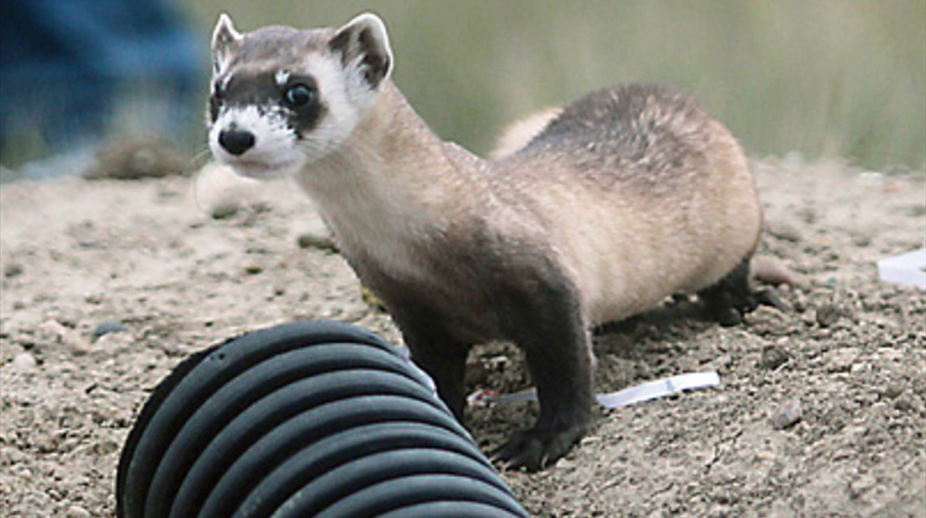 the Purple Line Extension “Transit Neighborhood Plan,” or TNP for short. It masquerades as a worthwhile program to add transit accessibility, affordable housing, and climate change mitigation to well known older neighborhood in the Greater Miracle Mile area, especially the Miracle Mile/Museum Row. (Photo above: For those having trouble making the connection, the animal above photo is a ferret.)

But these claims are baseless, and this charade is so pathetically transparent that it can be readily debunked through a series of basic questions and answers.

Q. Does the Transit Neighborhood Plan have anything to do with transit?

A. No, the TNP has no functional connection to transit. METRO, the regional transit agency commissioned the TNP project, but their grant encompassed streetscape, pedestrian, and bicycle improvements in the broad project area, none of which are in the TNP. The TNP also omits all other METRO first-last mile programs to increase transit use, such as free and discounted fares, bus shelters, real time apps, shade trees for sidewalks, shorter bus and subway headways, on-site parking for cars and bicycles, and easy access for pedestrians, busses, and car passengers.  These revealing omissions may be the reason there are no references to this bogus “transit plan” on METRO’s Purple Line Extension website.

Q. Does the Transit Neighborhood Plan have any thing do with local neighborhoods?

A. No, again. The TNP is oblivious to local neighborhoods, and even local elected officials, since its only focus is buildings. No Neighborhood Councils, resident associations, tenant unions, Home Owner Associations (HOA), Historical Preservation Overlay Zone (HPOZ) boards, or other local community groups played any role in developing this proposal. Like elected officials, all local groups were totally blind-sided by the proposal’s two up-zoning options, both unveiled for the first time at a public workshop on July 26, 2018, packaged with a short two-week comment period back-dated to July 12, 2018.

A.  Another no; it is not a plan. It is only a scheme to increase the height, mass, and density of commercial and apartment-zoned lots in the LaCienega Corridor, Beverly-Fairfax, Pico-San Vicente, Miracle Mile, and LaBrea neighborhoods. It not only clashes with the policies of the General Plan and the Wilshire Community Plan, but it is not based on any background studies, yet is scheduled for adopted in 2019, at least five years prior to the update of the General Plan and the Wilshire Community Plan. Its intent is to carve out an unmonitored up-zoning area that will then be removed from all future planning processes.

A. No, it will not. It’s one planning tool, up-zoning, is a highly unpredictable gas pedal. There is no guarantee that any developers, who already benefit from generous zoning in these areas, will suddenly change plans to invest in new residential projects. They may do nothing, which is already the case for most properties in the study area, despite their existing enormous, untapped zoning and population capacity.  Or developers may only build commercial projects on existing commercial streets.  But, regardless of which unpredictable choice they make, one thing is certain, the TNP does not require them to offer their tenants bus or subway passes.

We also know that the Purple Line, then called the Red Line, opened in the eastern half of the Wilshire Community Plan area in 1996 – 22 years ago. Despite even more generous zoning than the neighborhoods near the Purple Line Extension, the earlier Purple Line segment has yet to trigger a building, population, or ridership boom. In fact, subway ridership has been steadily declining.

Therefore, there is no reason to predict that the western half of the Purple Line corridor will unfold differently, with TNP upzoning magically producing a cornucopia of buildings, population growth, and increased ridership.

But, even if developers go the apartment route in the TNP area, their units will be priced the same as other recently constructed apartments in the Purple Line Extension area. These future apartments will also be expensive, with entry-level rents of $2,500/month, rising to over $8,000/month for large apartments.  Since renters who can afford these high-priced rents are the least likely demographic category to use transit, there is no evidence that they will give up on cars, whether their own or throughcar-sharing, because their expensive apartments happen to be near a bus or subway line.

Q.  Will the TNP increase the supply of affordable housing?

A.  No, again. The TNP has no requirement that new apartments built near the Purple Line include affordable units. The only affordable housing that might appear will be through voluntary density bonus programs. These offer investors relief from zoning provisions, such as building height or required parking, if their new apartment buildings include 5 to 35 percent affordable rental units. It is pure conjecture, however, that future developers will opt for these programs. The potential benefits to developers from the TNP’s up-zoning could mean they would no longer need voluntary density bonus housing programs.

Furthermore, LA’s Housing and Community Investment Department does not maintain easily accessed public lists of density bonus apartments or of qualified low-income residents. As a result, landlords have no straightforward way to determine who is qualified to rent their affordable units.

Finally, no City of Los Angeles agency ever physically inspects these promised affordable units to confirm that their rents are affordable or that tenants are drawn from lists of qualified low-income renters. The opportunities for fraud are endless.

Q.  Will the TNP reduce the generation of Green House Gases (GHG) in the areas at or near the Purple Line Extension stations?

A.  No, without monitoring programs, it will be impossible to determine any changes in the local generation of Green House Gases. Nevertheless, existing evidence indicates that the “plan” will not reduce the carbon footprint of the Purple Line area. First, any new buildings resulting from the TNP will require the demolition of existing structures. This means their embedded carbon will be destroyed, often released as toxic lead paint and asbestos dust. The constructions materials and operating requirements of the large, replacement buildings will, therefore, be more carbon-intensive than the smaller demolished buildings.

Second, the new buildings will feature continuous 24/7 heating and cooling, both energy hogs. This means they will also use more carbon-based energy than previous, demolished buildings.

Third, these new buildings will have more cars entering and leaving buildings than the original buildings. They will not only be larger, denser structures, but they will cater to the demographic category most likely to use cars, whether their own or through car-sharing.

Q.  Is there any evidence that the Purple Line and/or the TNP will cause a population boom so large to that it will outstrip the capacity of existing zoning?

A.  There is no evidence at all. First, all existing evidence indicates that the Wilshire Community Plan will continue to have modest population growth over the next two decades and beyond. At current optimistic population growth rates (1990-2015) of 880 more people per year, it will take about 27 more years, until the year 2055, for Wilshire Community Plan Area to reach City Planning/SCAG’s 2010 forecast of 337,000 people. At the slower (2000-2015) growth rate of about 100 additional people per year in the Wilshire Community Plan area, it will take another century to reach 337,000 people. This latter figure, by the way, reflects the impacts of the existing Purple Line subway, which now terminates at Western and Wilshire.

Bottom line, this plan area could easily accommodate an enormous increase in population without any upzoning. The TNP is absolutely not needed.

A.  No, the area’s electrical system repeatedly buckled during the recent heat wave, with some local neighborhoods going without electricity for three days. Other vital infrastructure systems, especially water and sewage, have reached the failure point, with DWP and Sanitation repair crews working overtime to keep up with widespread infrastructure collapse in the study area.

Without any currently reliable data from the City of Los Angeles on forecast infrastructure capacity and user need, and without any monitoring program included in the TNP, this anecdotal evidence indicates that the city’s public infrastructure and services are not capable of supporting LA’s current population, especially in an era of rapid climate change. If routine breakdowns are already occurring at existing population levels and climate conditions, the increases the TNP hopes to promote will soon push things to the breaking point.

Summary: These basic questions and answers reveal that the Purple Line Transit Neighborhood Plan is nothing more than a smarmy real estate deal. After all, it does not improve transit or provide affordable housing. Furthermore, it divorces itself from local neighborhoods and is antithetical to established planning policies and practices.

As for the TNP’s implicit assumptions about zoning, transit, and population, they are belied by hard facts, all available on City Planning’s own website.

(Dick Platkin is a former LA city planner who reports on local planning controversies for City Watch.  Please send comments and corrections to [email protected].) Previous columns available at the CityWatch archives and www.plan-itlosangeles.blogspot.com.Prepped for CityWatch by Linda Abrams.