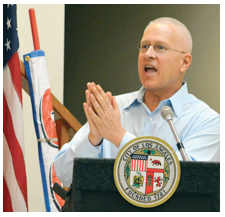 PLANNING POLITICS-The LA Times reports this week about City Hall's lax enforcement of land-use restrictions on developers were unsettling. But the paper may have only touched the tip of the iceberg.

Troubling signs also exist that City Hall may not be doing a forceful job at all of policing how developers comply with the state-mandated Density Bonus Law; that nearly-revolutionary law effectively allows developers to over-ride community planning priorities and super-size their projects - if they also “give back” to the community. That’s the big “if.”

In effect, the Density Bonus Law (SB 1818) has allowed hundreds of apartment house developers – with very little oversight - to significantly boost the size of their projects in return for their promise to “give back” by adding low and very low income housing units in their projects.

SB 1818 allows developers to super-size their projects beyond their “by right” entitlements in two ways:

1)    By adding extra “affordable” apartment units to their projects that are supposed to be set aside and rented exclusively to eligible low-income tenants; and,

2)    By adding extra market rate units to their projects that can be rented to the rest of their tenants.

A case in point: The BW is a luxury apartment complex for young millennials at the northeast corner of Wilshire and Barrington in West Los Angeles. By right, the developer (California Landmark Group-Barrington LLC) was entitled to build 50 units on this site according to the Brentwood-Pacific Palisades community plan.

But because it promised to provide five (5) low-income units under SB 1818, California Landmark Group was entitled to build 23 additional market rate units – in spite of what the community plan allowed. Bottom-line: instead of 50 units, The BW has 78 units, a whopping 56 percent increase.

Another example: The developer Townscape  Inc. is proposing to build two high-end apartment buildings across the street from the landmark Hotel Marmont on the Sunset Strip. Thanks to SB 1818 and Townscape’s commitment to build two-dozen affordable units, the project is seeking permission to build 228 units, about 100 more market rate units than it would be normally entitled to build by right, not to mention the two-dozen affordable units. Amazing.

Add up all these SB 1818 projects citywide – and you can quickly see how the law’s super-sizing incentives have created a torrent of environmental impacts not envisioned by neighborhoods and their community plans.

The theory behind the DB rules is simple: developers need to be incentivized to build low-income units. And this encouragement is provided by allowing developers to build additional market rate units to subsidize their profit margins and make it financially feasible to afford providing the low-income units.

Obviously, there is a "social good" behind all this - ensuring that the city provides a balance of housing opportunities to persons of all income levels, including low-income persons.

The trade-off is heightened growth and its impact on the city's infrastructure from overburdened roads and schools, stretched sewer and water delivery systems and potential declines in police and fire services.

Now arguably the trade-off could be worth it. It is important to have heterogeneous neighborhoods with income diversity.

But are we really getting that?

Hard to tell. In fact, this author as a result of research for a client who was fighting a large neighboring project, delved into the issue of whether developers who were obtaining the benefits of density bonus rules were actually renting their low-income units to low income persons.

Here’s what I found:

A 2011 study showed that between 2005 and 2009 (well before our recent housing boom) a total of 161 Density Bonus projects were built – creating a total of 6,023 new units, of which 2,333 were affordable. The study does not say how many of the remaining 3,690 market rate units in the survey were “bonus” units – built beyond what the developer was entitled to build by right. I think it’s safe to say that at least 1,000 to 1,500 fall into this category.

The city’s Housing and Community Investment Department (HCID) is supposed to audit the density bonus projects to ensure that the units set aside by the developers for low-income tenants are actually rented to qualifying tenants. The city has hired a private contractor, Urban Futures Bond Administration Inc., to perform these audits.

The city is paying Urban Futures $14 per unit per year to audit those 5,240 affordable units.

Now, this would be a terrific deal if - for a mere $14 per unit per year - Urban Futures auditors actually went into the field, inspected and eye-balled these units to verify that the developers’ paperwork claims about who is renting their affordable units were accurate.

I would willing to bet (I do NOT know this for a fact) but I think it’s fair to assume that for $14 per unit all the city is getting is a desk-top audit: a review of the developers’ annual reports to determine that all the right boxes have been checked.

I asked HCID for data about how many non-compliance cases their auditors turned up; they are still trying to develop this information.

My suspicions about this whole auditing process were exacerbated when I compared two city databases: one was comprised of the 161 density bonus projects (with their addresses) from the 2011 report, performed by the city’s Planning Department; the other was a registry of all affordable units – including ones created by the density bonus law – in the city compiled by HCID. This registry is supposed to assist low-income folks find affordable units (which may or may not be available for rent – but are affordable nonetheless).

Question: why were all these apartment buildings with affordable units in West LA not showing up on the registry? Is this an innocent oversight? Are these upscale projects not listing their affordable units because they don’t want to encourage “poor” people to really have a shot at renting their units and “dragging down” values? If that’s the case, who are renting these units? What are these owners hiding – or gaining – by keeping their units off the registry?

Honestly, I don’t have an answer. Yet. Maybe the LA Times will get around to filling in some of these blanks.

I also asked the property managers of three density bonus buildings in Brentwood if they had affordable units for rent – when city records said they should have. I drew blanks. They didn’t seem to know what I was talking about. To be fair, when I later visited two of these buildings (yes, under false pretenses) I got different - but still not satisfying - answers. Frankly, I don’t have the time, nor the authority to fully check this out as a private citizen.

But I also have the sinking feeling that at $14 per unit per year, the city’s auditors are unlikely to be fully checking these issues out either.

In fact, I fear that the public could be getting badly hoodwinked – we are allowing the developers to super-size their projects, to work-around our community plans, to create new environmental impacts and yet we don’t have a very firm fix, I believe, on whether we’re getting the benefit of low-income units being rented to eligible tenants.

I am not the only one who has raised concerns about these matters.

Three councilmembers, led by Paul Koretz, introduced a motion in April, 2009 to fix their concerns about the density bonus law; in particular, they wanted to require that developers “provide written financial proof that any incentive [granted under the density bonus law, i.e. all those extra units] is financially necessary” – in other words, that they could not provide the affordable housing without the incentives.

The trio also wanted to increase the number of neighbors who would have to be notified that the city’s Planning Director was considering a developer’s density bonus application; as it stands, the notification is now limited to adjacent property owners only. As far as I could ascertain, the planning director has never turned down a density bonus application; nor has the director ever held a public hearing to witness his review of such an application.

Two similar motions were introduced in May 2014 by Councilman Mike Bonin (photo above). Here’s the language from one of those motions:

“If our neighborhoods are going to be asked to absorb the additional density, traffic and development impacts from density bonus projects, the City must ensure that the affordable units being produced are being operated as affordable units, are being maintained at affordable rent or sale levels, and are occupied by residents who truly qualify for the housing.”

Here, here!! But Bonin’s well-meaning motion is still sitting in the Planning and Land Use Committee and I doubt that there are many councilmembers who want to rock the density-bonus boat. All the more reason for the media to start digging.

(John Schwada is a former investigative reporter for Fox 11 in Los Angeles, the LA Times and the late Herald Examiner and acontributor to CityWatch.)