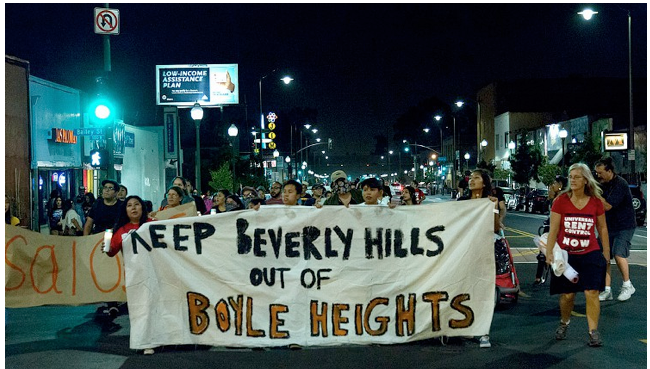 DIVIDED LA--The Los Angeles Police Department is investigating three incidents of vandalism at art galleries in Boyle Heights as possible hate crimes. In at least one instance, "187" and "Fuck White Art" were painted on a building in Boyle Heights, according to police. The number 187 is the California penal code for murder.

The heavily Mexican-American Eastside community has been a cauldron of tension between locals and a handful of mostly newer art galleries, which are seen by critics as the leading flank of a wave of white gentrification. In September protesters gathered outside the opening of a new gallery, Artist Space, created by Beverly Hills–based United Talent Agency, which represents A-list actors and, now, up-and-coming artists. 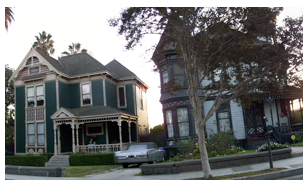 And earlier in the summer the group Defend Boyle Heights demanded that "all art galleries in Boyle Heights ... leave immediately." Anti-gentrification activists say the galleries, new restaurants and new housing serve as tools to displace Boyle Heights residents who, in a market where median rents exceed median income, will have nowhere else to go.

The vandalism took place between Oct. 8 and 11 and again on Oct. 15, according to LAPD Capt. Rick Stabile. Seeing the "187" marking as a threat, and noting that the graffiti targets white people, police started a hate-crime investigation, he says.

"We are so neutral on the gentrification part of this stuff," he says. "But to me there's a way to protest legally, especially in LA, and that doesn't mean you can vandalize people's property."

City Councilman José Huizar, who represents the community, described the graffiti as particularly out of order given the history of Boyle Heights as a kind of Ellis Island of L.A. — where generations of immigrants of Jewish, Japanese and Mexican backgrounds have found a landing place.

"As Americans, we all have the right to peacefully assemble and express our opinions," Huizar said in a statement. "However, hate speech graffiti, property damage or other illegal acts are crimes and cannot be tolerated.

Defend Boyle Heights denied responsibility for the vandalism — but it didn't condemn it. "We don’t know who tagged up these galleries, but we certainly don’t condemn it," according to a statement from the group. "It is right to rebel! We are glad to see the community rise up to resist displacement, art washing and gentrification — however they see fit! Your anger is justified."

The statement described the possible hate-crime designation as ironic because police have fatally shot "men, women, boys and girls in our community."

LAPD's Stabile says he wants gallery owners and critics to talk it out, and he's asked the city Human Relations Commission to set up community meetings where both sides can air their issues.