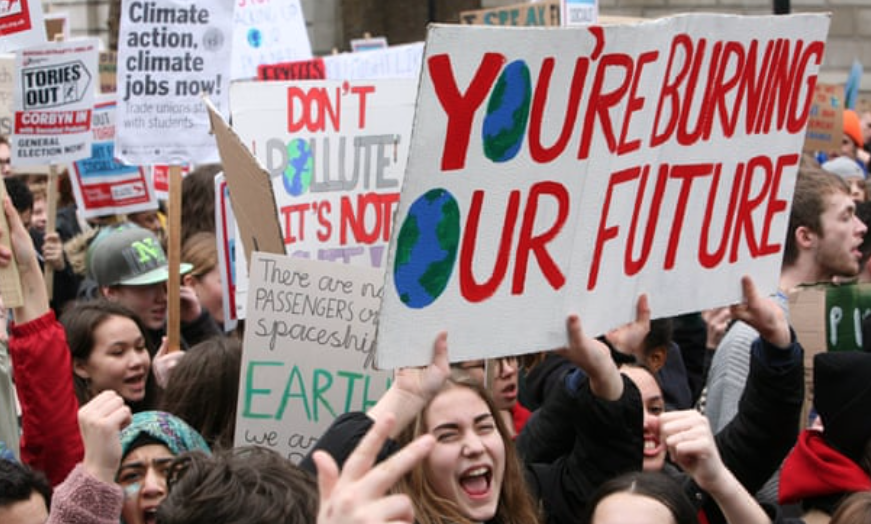 CLIMATE POLITCS-The Republicans are on the sidelines on the climate crisis. Government scientists are muzzled.

Leading Democrats -- though not all -- are cautious. CEOs of some of America’s biggest corporations are pledging action while others, like investment firms, fossil fuel companies, and Charles Koch’s lobbyists, are downright hostile. And Donald Trump, the world’s leading climate change denier, will not even attend a UN climate summit on September 23 even though he will be in the UN building the same day.

But the American public is coming around to the view that the climate crisis is real, urgent, and therefore a national priority. The turnout of millions of people on September 20, highlighted by student-led strikes in most of the world’s major cities, is evidence of a new consciousness about the threat climate change poses to everyone, everywhere.

Young people are ahead of the curve. They understand the science, the politics, and the future implications of climate change. They worry about their prospects, but just as much about the planet’s prospects. And they don’t trust the politicians to do their job. Their demand for decisive action is tempered by concern, as a recent House committee hearing showed, about whether there really are any intelligent adults in the room. “I don’t want you to listen to me,” Greta Thunberg told Congress members. “I want you to listen to the scientists,” referencing in particular the latest Intergovernmental Panel on Climate Change report that gives us about twelve years in which to halt and begin reversing global warming. How many members of Congress have read it?

Jamie Margolin, founder of Zero Hour and one of the panelists at the House hearing, puts her fight against climate change, which she began as a high school student, in a larger political context. She calls it “decolonization”:

In short, stopping and reversing climate change is part of the larger struggle against corporate greed, governmental neglect, and social injustice.

Back in 2015, 21 Oregon students launched a lawsuit, Juliana v. United States, against the Obama administration based on the unprecedented claim to a right to a clean environment, specifically addressing climate change. Among the students’ demands is that the government stop issuing leases for coal, oil, and gas extraction. In November 2018 the Supreme Court rejected several attempts by the Trump administration to quash the suit. The government’s argument is that climate change is properly dealt with by government agencies, and that (imagine!) it would have to undertake wholesale policy changes. As a solicitor-general put it, the plaintiffs “seek nothing less than a complete transformation of the American energy system — including the abandonment of fossil fuels — ordered by a single district court at the behest of ‘twenty-one children and youth.’” Well, we certainly don’t want a few kids getting in the way of business as usual.

The 9th Circuit Court of Appeals in Portland OR began hearing the case last June. Whether or not the case will come to trial remains uncertain. But here again, the children have spoken, and they are persistent. Listen to them: They know how to speak truth to power, and they’re on the right track.