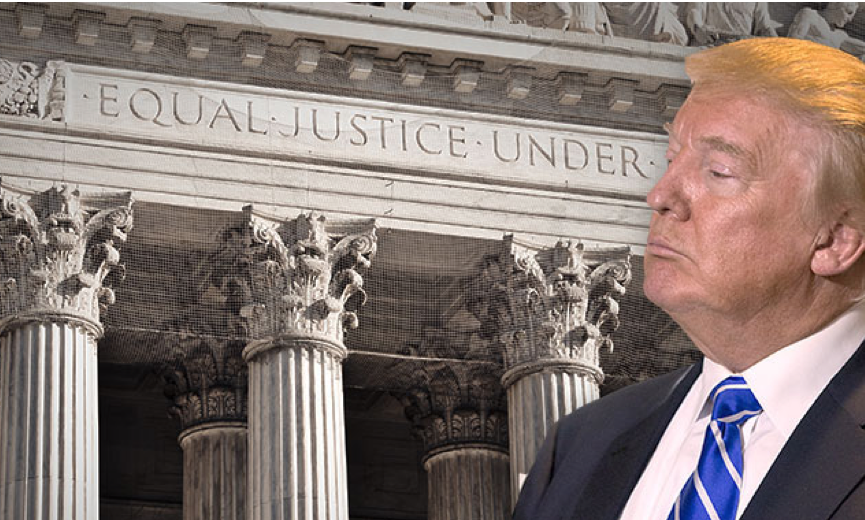 CORRUPTION WATCH-Aside from the fact that The Donald is upset with virtually everyone in the world except Vlady, why is he so mad at the courts?

Since he has reportedly been involved in over 3,000 lawsuits whereby he has stiffed thousands upon thousands of blue collar workers and suppliers, he knows something that most Americans deny. The courts are hideously corrupt and are the henchmen of the powerful. President Barack Obama even adopted his own Doctrine of Too Important to Prosecute so that the Wall Street criminals who wrecked the world economy would not be prosecuted. Under a Dem or a GOP regime, The Donald knows that the courts protect the wealthy.

How Does our Court System Operate?

California seems to be worse than most states. Thus, it is beneficial for public awareness to peek at the California judiciary.

On July 12, 2018, San Francisco District Attorney George Gascon said, “Our legal system is based on principles of fairness and honesty. Deliberately falsifying evidence not only harms those who are targeted by the deception, but also jeopardizes our trust in the institutions designed to serve us all.” --Bay City News, by Daniel Montes

Reporter Montes’ account is so jumbled that it is hard to tell which side is up. (We tried to obtain clarification to no avail.) Allegedly a court staffer reported an Inyo County judge to the Commission on Judicial Performance [CJP] for collecting salary contrary to Cal Const Art VI, Sec 19. A judge who has any matter pending more than 90 days may not get his/her pay check.

The SF DA was not complaining about the lack of honesty by the judge who may have falsified his case status reports, but instead the SF DA is criminally prosecuting the whistleblower. Apparently, the CJP determined that the complainant had misstated whether he/she had sent an email to the judge prior to making the complaint. However, readers may recall that the CJP claims that its data is so extraordinarily confidential that it cannot even be audited by the State auditor. But it seems that when retaliation is the CJP’s motivation, confidentiality disappears. What about Labor Code §1102.5, California’s whistleblower statute? See California Employees’ Whistle Just Got Much Louder for a discussion of this subject.

It seems that the CJP forgot about its super-confidentiality. How else did the SF DA learn about the complaint? While the CJP divulged the complainant’s name, it re-imposed strict confidentiality as to the judge’s identity. Do you ever get the feeling that a different set of rules apply to the powerful than to the rest of us?

The Law for the Chickens Does not Apply to the Wolves

If the SF DA is correct that deliberately falsifying evidence and deception jeopardize trust in our institutions, why do prosecutors and judges lie, cheat, falsify evidence and railroad innocent people?  From Montes’ Bay Cityarticle, however, one cannot find what evidence the complainant falsified. When the courts are out to get someone, however, facts play no role in their retaliation. Montes’ article divulged the complainant’s name five times but keep secret the judge’s name. Different rules for different folks.

The public does not realize that the band leader in prosecutorial misconduct is the California State Bar. The State Bar is basically an institution run by a few billionaires and multi-millionaires to protect their businesses and political causes. -- Calif, Const. Art VI sec 9

After California courts were caught by the feds in January 2015 for railroading people into prison by using perjury and falsified evidence, public relations considerations forced California to revise its Rule 5-110. It requires prosecutors to promptly advise the courts of exculpatory evidence. According to State Bar Judge Donald Miles, however, Rule 5-110 is a nullity. It means that prosecutors do not have to present exculpatory evidence, promptly or otherwise.

For Judge Miles, the defendant may present the exculpatory evidence at trial. One point of Rule 5-110 is to protect people from being railroaded in horrendously expensive trials when they are innocent. And, what about the defendants who do not know about the exculpatory evidence? How do they present that evidence at trial? It’s common for California judges to speak tonteria – foolishness. In California courts, the facts and the law are whatever the judge wants them to be at the moment. Truth and reality have become fungible qualities.

The State Bar Pollutes All Prosecutions

According to the State Bar, under Rule 5-110, prosecutors may not only withhold evidence which proves that the defendant is innocent, but prosecutors may present false evidence to the court in order to mislead the court. Because the State Bar sets the day to day ethics for prosecutors in every county of the state, every single prosecutor knows that he may conceal evidence and manufacture evidence as well as call Black Congresswomen a “c-nt” or a “bitch.” Really? Twenty-five years after the OJ case and Det. Mark Fuhrman, and this professional bigotry continues. Californians would not be seeing this type of vile behavior unless the State Bar condoned it.

El Anaranjado is Upset That Judicial Corruption No Longer Favors Him

The Orange One did not realize that judges require secrecy while they rape and pillage the judicial system. With his constant twittering, millions of people scrutinize every nuance of his legal woes. No longer can he bribe a judge with a week’s vacation at some Trump resort without the media’s blabbing to everyone. Judges don ‘t mind being corrupt, but they do mind sunlight.

By a cruel twist of fate, when The Donald’s Presidency is involved, federal judges apply the facts to the law. The rest us, however, are left with judicial thuggery.