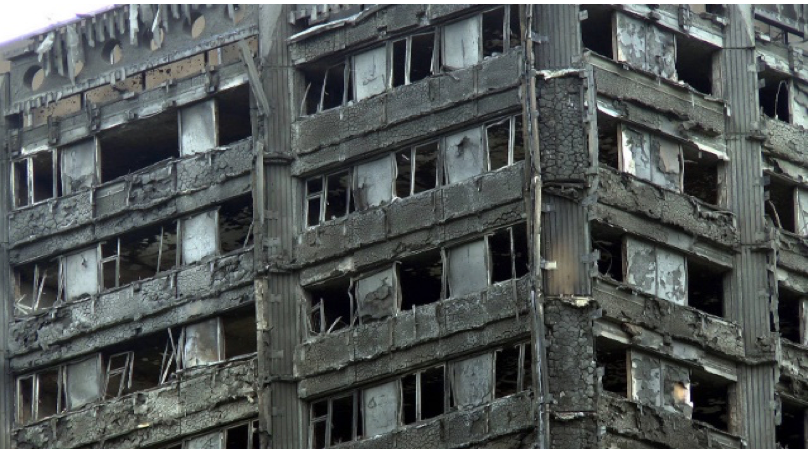 NOT YOUR PARENTS’ GENTRIFICATION-About one year ago in June, I was in London, speaking at a conference on global inequality at the London School of Economics.

The morning of June 14, I could see smoke rising from the Kensington neighborhood, at the Grenfell Tower (photo above), a 24-story affordable apartment building. I walked closer to see the inferno.

Seventy-one people lost their lives and over 600 people lost their homes. As of a few months ago, 320 households were still displaced and living in hotels, including over 200 children. Meanwhile, in the immediate Kensington area around the charred remains of the tower, there are 1,800 vacant luxury homes and hundreds of empty commercial spaces. It is a luxury ghost town. London is an acute case of the problem of the “tale of two cities” opening up across the world.

Who is London for? Who are our cities for?

This is not the previous generation’s gentrification. The housing crisis in many of our urban areas is not the result of normal real estate market forces. Local gentrification cycles have been “supercharged” by the fact that many cities are now a global destination to park investment capital.

While there are multiple drivers of this problem, one is the growing percentage of luxury real estate that serve as “wealth storage units.” A growing number of global “supercities” are experiencing infusions of global capital, some of the trillions of wealth seeking to touch down in real property. U.S. cities like Boston, New York, Miami, Washington, D.C. — and west coast cities like Vancouver, Seattle and San Francisco — are viewed as stable markets to park assets. This is where global wealth — much of it hidden in trusts and shell corporations — is touching down in real property.

This market is not driven by the need for new commercial space or homes to live in, but by a global “capital preservation strategy.” Whether you are a Russian oligarch or Chinese investor — trying to get capital out of your home country to avoid expropriation — or a homegrown U.S. billionaire — you need a place to park your capital where it can hold value.

From this vantage, it doesn’t matter if the property is vacant because the goal is capital preservation — just having your asset hold value or grow steadily.

These global forces are having a disruptive effect on our community — with vacant property being one symptom. It is bidding up cost of land and requiring new fossil fuel energy infrastructure at a time when we should stop building new fossil fuel infrastructure. They weaken our communities. As one Architectural Digest article noted, “Who Needs Neighborhoods When You Can Have These Wild Amenities.”

They even contribute to unequal immigration policies. Luxury construction projects such as One Dalton Place in the Back Bay offer their global investors the EB-5 visa program — essentially an opportunity to buy U.S. residency for wealthy individuals.

So what can we do? Boston should levy a tax on vacant commercial units and vacant luxury units to disincentivize treating properties as wealth storage units.

We should also explore a high-end real estate transfer tax, on property sales over $2.5 million, and a transparency reform, requiring the disclosure of beneficial ownership. We should ideally move in consort with other cities experiencing similar market forces to put in place a parallel set of policies.

My research colleague Emma de Goede has prepared a policy brief memo looking at vacancy taxes that are in place in Washington D.C. and Vancouver, British Columbia, Canada. In my June 12 testimony to the Boston City Council I summarized many of these findings. Like a lot of cities, Boston is struggling with how to address the disruptions caused by global capital to their housing markets.

(Chuck Collins is a senior scholar at the Institute for Policy Studies (IPS) and directs IPS’s Program on Inequality and the Common Good. This piece was first posted on PostCarbon.org.  Prepped for CityWatch by Linda Abrams.