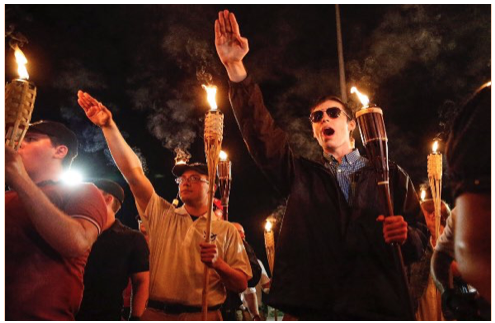 VIEW FROM THE RIGHT--There are so many uncertain stories, so many unanswered questions, and so many confusing narratives after the nightmarish civil unrest in Charlottesville that it will take weeks or months to figure them all out...but two things are for certain:

1) What happened in Charlottesville should never have happened--whether we blame the disgusting neo-nazis and white supremacists, the disgusting Antifa activists who also provoked violence (and who have nazi-like tendencies, to boot), or the disgusting manner in which the police let things spin out of control ... it was DISGUSTING!!!

2) President Trump blew the chance to call out the white supremacists and neo-nazis, and he'll need to clarify and step things up a notch at a time when he's got economic, political, and foreign policies crises that, more than ever, require a united nation.

Much has been made of the racial, socioeconomic divisions that occurred on President Obama's watch (even among his supporters), and President Trump (who very much DOES have his black, Latino, and other non-white supporters, and was elected because of them) must do better:

1) Pure and simple, there is no room for nazis, white supremacists, communists, black supremacists, or any racial/fascist creeps in the United States of America.  Even "La Raza" (which means "The Race" in Spanish) is changing its name.

The conflict that began as a protest against the removal of a statue of General Robert E. Lee was taken over by white supremacists and neo-nazis waving flags...flags that Americans have fought against, bled, and died.

For those who choose to not pursue historical revisionism, the civil rights movement of the 1960's was borne in World War II.  How could we tolerate racism at home after we fought the Nazi racists of Europe and the Imperial racists of Japan?

We see conservative pundits everywhere deploring the separatists, racists, and nazis...and it would do well to have the right people from the left deplore the Antifa marchers who have promoted violence and riots...and are as nazi-like in their beliefs and actions as any right-wing nazis.

By the way, the term "nazi" references the Nazi Party of 1930's/40's Germany, and stands for "National Socialist Party".  That's what happens when racism-as-a-form-of-nationalism, and/or socialism, are left to their extreme forms.

2) The right to free speech and assembly is a very different thing than a violent mob, and the Charlottesville police appear to have let this spin out of control.

The question of pulling down statues of the leaders of the Confederacy, as well as eschewing such founding fathers like Thomas Jefferson are darned good topics to address...but violent mobs?

Despising Republicans is an American right and tradition of many in the nation...but a violent assassin shooting up politicians at a charity fund-raising baseball game?

Despising those from the political left is also an American right and tradition of many in the nation...but driving one's car into a peaceful crowd of counterprotesters like ISIS terrorists have done in Europe?

No one should have died--and pointing out the other side and decrying them as "worse" belies the truth of the matter:  each radical/thuggish side was wrong, and no one should have been hurt. Or killed.

Maybe you've seen this definition of "alt-right", which calls out the Democratic Party as using this term to cover up its own violent past, and its promotion of the original Ku Klux Klan.

Maybe you've read up on how the "alt-right" is broken up and struggling to redefine itself.

But what the hell do I know?

And along comes the term "alt-left". I've heard that term defined as representing Antifa activists and "social justice warriors", as well as those who oppose those groups.

Victor Davis Hanson has taken a shot at defining the "alt-left", but I'm more confused than ever, because he suggests there are more than one type of "alt-left.

What is for certain, however, is that conservative and/or pro-Trump spokespeople are all against the white supremacists and neo-nazis who turned an American city into a nightmarish scenario that was anything BUT American.

Those who are probably "mainstream" alt-right wanted nothing to do with the nazis and "pro white" cretins.

Those who were legitimate counter protesters wanted nothing to do with the Antifa activists who threw urine and feces on the police and came out with fists and weapons.

And EVERYBODY is wondering how the hell the police let this get so damned crazy, and chaotic, and anarchistic ...

... and EVERYBODY should hate a nazi, whether that nazi be from the "left" or "right".

Because there is NO room for nazis in the United States of America.

(Kenneth S. Alpern, M.D. is a dermatologist who has served in clinics in Los Angeles, Orange, and Riverside Counties, and is a proud father and husband to two cherished children and a wonderful wife. He is also a Westside Village Zone Director and Board member of the Mar Vista Community Council (MVCC), previously co-chaired its Planning and Outreach Committees, and currently is Co-Chair of its MVCC Transportation/Infrastructure Committee. He was co-chair of the CD11 Transportation Advisory Committee and chaired the nonprofit Transit Coalition, and can be reached at alpern@marvista.org. He also co-chairs the grassroots Friends of the Green Line at www.fogl.us. The views expressed in this article are solely those of Dr. Alpern.)