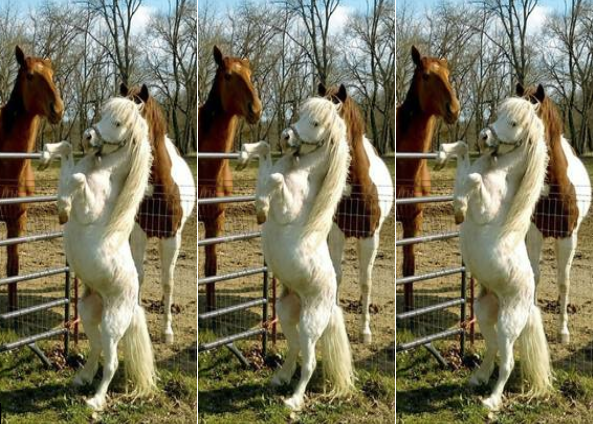 ANIMAL WATCH-This is not the article I planned to write for the Fourth of July.

I hoped LA Animal Services General Manager Brenda Barnette would post on the LAAS home page that the exploding fireworks raining down on the City during this week make it the most dangerous time of the year for pets -- especially dogs, which may bolt and/or bite when frightened. The tragedy and liability can extend far beyond just panicked escape from yards.

This is also a time to remind owners or caregivers they can be held liable for auto accidents caused or other injuries incurred as a result of the actions of a frightened pet.

But, instead, a half-page photo on the LAAS opening page shows an American Pit Bull Terrier adorned with red-white-and blue, with the message, "We need your help NOW to adopt or foster to make room for the hundreds of pets who will take refuge with us."

The LAAS generic e-mail message sent from ani.socialmedia.com on June 27, "Fourth of July Fireworks are Not Fun for your Pet," contains some good basic information; such as, the fact that for $15 you can microchip your pet at any city shelter. But it was too late, and lies well buried on the site, daring visitors to find it!

Let's not forget that cats also can be terrified and run from home during the blasting displays that literally cause houses to shake and the sky to fall (for pets). Confine your kitty in a secure area with a place to hide so they don't end up locked in someone's tool shed or hit by a car. If you believe it is necessary or advisable, ask your veterinarian or local pet store for advice on calming your pet(s).

SO, WHAT IS BARNETTE'S REAL GOAL FOR THE FOURTH?

Is this truly a good time to put Pit Bulls (by far the largest shelter population by breed-type) with unknown history and behavior into new neighborhoods and homes of potentially inexperienced strangers? Our tax dollars pay $45 million a year for shelters to keep lost/stray dogs safe and unable to escape and be harmed, or harm others.

Considering the lack of prominent, sound information to keep your own animal from adding to the problem, what is really important to Barnette on July 4?

Is she most interested in keeping animals safe or not risking her "No Kill" stats? Is she concerned about the welfare of the dogs and the community, or in seizing this opportunity to dump the long-term Pit Bull shelter residents on soft-hearted animal lovers?

Will a warning accompany "fostered" dogs--especially Pit Bulls--advising that their behavior in strange homes and situations is not predictable or that the reason they haven't been adopted from the shelters for weeks or months could be problematic behavior or exhibited aggression?

Since the new adopters/fosters may take dogs about which they have little or no background information and which may have been living on the streets before being impounded, what is to make us--and their neighbors--confident they will stay in the yard or home of this well-meaning foster when the fireworks start?

REQUIREMENTS FOR BECOMING A JULY 4 FOSTER

According to a 2017 LAAS advisory (the only one available on Google for this holiday), "It’s easy to become a Foster Volunteer! Just go online to download your application at LAAnimalServices.com/volunteer/foster-program or go to the City animal shelter nearest you and ask for a Foster Volunteer application. Take your completed form to the shelter and we’ll get you fostering a pet right away." (That's all it takes to take home a large-breed dog?)

Fosters or adopters won't be told if they are taking a Pit Bull, because the shelter lists all dogs as "mixed breeds."  A quick glance at the first two pages today reveals that at least 70% appear to be Pitties or close relatives!

Of course, the handsome Pit Bull on the LAAS website is touting red, white and blue, which is intended to make it unpatriotic not to trust him.

Pet Finders' National Pit Bull Awareness Day posts as one of its resources Best Friends Animal Society’s Pit Bulls: Saving America’s Dog campaign; [[[   https://network.bestfriends.org/ ]]] and Best Friends also tells us on its own, "Pit Bulls: All You Need to Know" blog, that "Pit bulls were America’s darling dogs for many years.” So, when and how did Best Friends become the ultimate expert ("all you need to know") on Pit Bulls?

And, on its post of 13 All-American/ Made in the USA Dogs, Bark Post lists, American Staffordshire Terrier/American Pit Bull Terrier, AKA: Pitties! And says, "They’re very people-oriented and thrive best when they get to be part of a family. This loyal dog makes a great protector."

Really?  Let's look at just a few recent events that test this theory.

A thunderstorm in the Midwest can have a similar effect on the behavior of an animal as fireworks in Los Angeles.  The booming sky and falling rain are not identifiably different for animals.

On June 27, 2019 FOX14 reports the not-guilty plea by the owner of a Pit Bull identified as injuring three other horses and killing Gunther, a former Ringling Brothers miniature pony, who was now a pet of Suzanne Salazar. Gunther was beloved by the entire community in Joplin, Missouri, the article states.

According to the report, the owner of the Pit Bull told the investigating Joplin Animal Control Officer that "the dog had escaped overnight after becoming scared from thunderstorms." Although there was more than one dog loose, there was no evidence or witness that more than one dog attacked, the Joplin Globe reported.

Salazar said the injuries that led to her beloved miniature pony having to be euthanized were so severe that she knew immediately "there was no way for him to survive this."

The veterinarian who put Gunther down at the scene told the Globe that the little horse "suffered gruesome injuries on its face and genitalia, and had leg injuries....This pony couldn't get away because he was down low with the dog," he said. "There was no way he could get away from the dog."

"I honestly think Gunther got the worst of it because he got between the other horses and the dogs to protect them. That horse brought joy to so many people," Salazar said.

Gunther was trained to do tricks, such as, standing on his back legs to pose and shaking hands Neighborhood children who liked to visit the horses this week placed flowers in Gunther's memory on the fence, Salazar told Fox 14:

"I'm not against banning any breed, but I would like to see stronger regulations as to licensing and accountability for these dogs," she said.

Another miniature pony and two regular-sized horses were also attacked but survived However, Salazar says they are "emotionally scarred."

They still jump every time they hear a dog in the neighborhood bark. Also, they used to sleep under those trees at night and now they sleep over there by Gunther's grave."

PONY NOT THE ONLY RECENT VICTIM OF ‘AMERICA'S DOG’

There have been escalating recent human tragedies involving Pit Bulls (read more here.) The story of Gunther was provided first not to diminish their importance, but to illustrate the foolhardy approach of releasing Pit Bulls from physically safe shelters when there is added reason for them to be unsettled and agitated by outside influences--such as storms or fireworks.

The victim's grandmother told News 6 that the boy was outside with the family's two pit bull-mixes when one of the dogs grabbed him by his neck. It is not known if the other dog was involved in the attack.

"A caller was very hysterical. The victim is breathing and, per caller, in and out of consciousness," the dispatcher said.

According to police, the mother of the child came outside and witnessed one dog "on the child." Animal services said it's likely both dogs were involved in the incident.

The child suffered injuries to his face and back but is in stable condition.

On Thursday, Isaiah Geiling, 2, was mauled to death by a family pit bull in Louisville.

On Friday, WLKY updated its report with new information. They spoke to the child's maternal grandmother, Cynthia Coy, who said the deadly dog mauling came just weeks after the dog had attacked Isaiah, ripping his ear.

A reporter from WLKY Tweeted earlier today that the attacking dog is a pit bull. The WLKY Facebook page shows an image of the dog.

Not all dogs will try to flee during storms or fireworks -- some find a safe spot in the house and hunker down. Some -- including Pit Bulls -- may run away in fear but don't attack and harm people or other animals.

But, is it really a good idea to have dogs with unknown/untested reactions given to possibly inexperienced owners with minimal fencing to "foster" for the Fourth of July week--especially in a city with the density of human and pet population and traffic of Los Angeles?

LAAS GM Brenda Barnette and her two Assistant General Managers could have launched an almost cost-free media campaign a month ago to prepare dog (and cat) owners for this weekend, alerting them to license (for dogs) and microchip and providing warnings and safety tips for the Fourth of July. After all, it happens the same time every year!

At an annual salary of $250,000 for the General Manager of Animal Services and generous earnings by two Assistant GM's, doesn't L.A. deserve better leadership, more planning--and safer policies for animals and humans?

(Phyllis M. Daugherty is a former City of Los Angeles employee and a contributor to CityWatch.) Photo credit: Gunther (foreground), a retired circus pony, was euthanized Wednesday after being attacked by a dog, according to authorities. COURTESY | SUZANNE SALAZAR  (Owner of Gunther)  Edited for CityWatch by Linda Abrams.