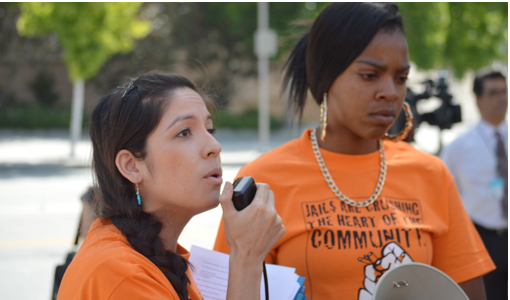 LA COUNTY WATCH--So crammed with hypocrisy is the motion by LA County Supervisors Sheila Kuehl and Hilda Solis to create a five-year Countywide Initiative on Women and Girls (“WGI”) that it will be a miracle if a lightning bolt doesn’t shoot down from the Heavens upon the motion’s passing. (Photo: Diana Zuniga above left.)

For months, literally thousands of women and girls have been grieving openly about the proposed Women’s Detention Center in Mira Loma, which is opposed by more than seventy organizations, including NOW and the Women’s International League for Peace; CHIRLA and the Immigrant Legal Resource Center; the ACLU and National Lawyers’ League, the Ella Baker Center for Human Rights and on and on.

Concerned citizens have been working day and night to stop a prison which, apart from being so far away that it will break apart families, will also endanger the lives of girls and women and other vulnerable populations because of its location in a region with a high incidence of valley fever.

When the director of Californians for a Responsible Budget, (CURB), who in her capacity represents seventy organizations opposed to the proposed detention center, tried to be heard on the topic of Mira Loma, Supervisors Kuehl and Solis couldn’t be bothered to listen. (Photo left: Diana Zuniga addressing County Supervisors Sept, 2015)

“Board of Supervisors?" the CURB director said 90-seconds into her testimony.  “All of you all that are talking to each other right now instead of listening to our call to action. Supervisor Solis, Supervisor Kuehl, can we listen just for one second. Thank you.”

A few sentences later she had to call out Supervisors Kuehl and Solis again for carrying on a side conversation. (Lest that kind of conversation be considered an anomaly, watch this clip).

“The Mira Loma jail will be a four-hour one-way trip for a family that lives in Lynwood,” Supervisor Solis said, in a posting on her website on September 4, 2015. “It is hard to see how these women will have sufficient access to visitors, programs and medical care.”

Unless the first action of the Countywide Initiative on Women and Girls is to kill Mira Loma, it will exist as a monument to hypocrisy.