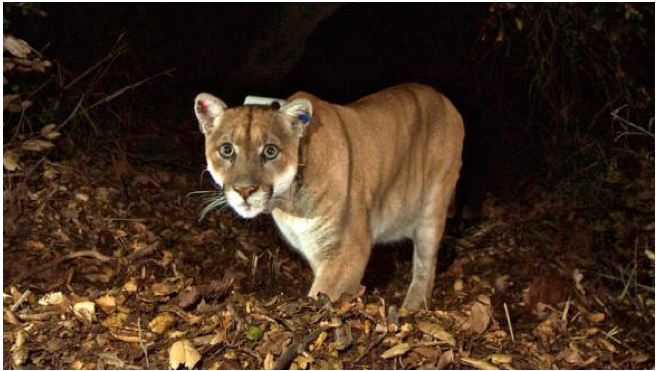 P22 is a 7-½ year old mountain lion living in Griffith Park, right in the heart of the city. His story is so captivating and inspirational I felt he deserved his own documentary feature film, “The Cat that Changed America”, which has just been submitted to the Sundance Film Festival, as well as other major film festivals in the US. When the trailer was released on social media last weekend, it rapidly reached an audience of 30,000 people, adding to P22’s already established fan base. 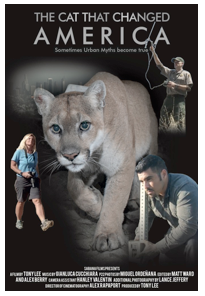 P22 was born in the Santa Monica Mountains west of Downtown LA, and he had to cross two of the busiest freeways in the country, the 405 and the 101 to arrive in his new home in Griffith Park. In doing so, he travelled through one of the most densely populated areas, through Bel Air and Beverly Hills, and came within a couple of miles of the Hollywood Walk of Fame. Incredibly no one saw him. Los Angeles is one of the few urban cities to have large carnivores living within its city limits.

“He’s called P22 because he is the 22nd puma we’ve captured in our study,” says wildlife biologist Jeff Sikich from the National Park Service. Jeff has been radio-tracking P22 ever since his first discovery in 2012, and the National Park Service biologists are conducting extensive studies into the Mountain lions of the Santa Monica mountains, looking at their genetic diversity and issues of connectivity.

For four years now, Jeff has been following P22 in Griffith Park, monitoring his movements and finding out about his habits. P22 like all mountain lions is secretive and nocturnal, so filming him for the documentary was the biggest challenge. Mountain lions are called ‘Ghosts Cats’ for good reason. They are shy of people, incredibly elusive, and difficult to track. Luckily photographs and footage of P22 was filmed on camera traps, provided by the Griffith Park connectivity study as well as the National Park Service. Cameras were placed along trails. Hundreds of pictures were taken of the wildlife coming in and out of Griffith Park, including bobcats, skunks, deer and coyote.

As a natural history film maker myself, I first became aware of P22 when he was photographed for National Geographic magazine, walking in front of the Hollywood sign. But it was only after speaking to wildlife biologist Miguel Ordeñana, who captured the first photograph of P22 on one of his camera traps - “It was the biggest discovery that no one expected” - did I uncover the extent of his incredible journey.

Yet despite P22’s celebrity living in the shadow of the Hollywood sign, and becoming a symbol for urban wildlife, he is now trapped in the park. He’s hemmed in by freeways and the urban sprawl, and will probably die a lonely bachelor. It’s very unlikely that another mountain lion will make that journey and survive.

P22’s plight has aroused the sympathy of not only conservationists but also anyone who hears of his story. “Angelenos love him,” says Beth Pratt, the California Director for the National Wildlife Federation. “Who can’t relate to being dateless on a Friday night and stuck in traffic?”

The territory range of a mountain lion is 200 square miles, and males will fight to the death over territory. As a young male, P22 had no choice but to leave his birthplace in the Santa Monica Mountains and strike out to find a territory of his own. “He’s the Neil Armstrong of his kind,” says Beth. “He made a journey into the unknown.” It was a miraculous but hazardous journey, as mountain lions die on our freeways as they try to disperse.

Beth is spearheading the “Save LA Cougars” campaign to raise over $55 million to build a wildlife crossing over the 101 freeway at Liberty Canyon, near the place where P22 was born. “I’ve been working in environmental conservation for 25 years now and the Liberty Canyon crossing is the most inspirational thing I’ve worked on – it’s also maybe the most challenging,” says Beth. In order to stay on target, the campaign’s near term goal is to raise $10 million by 2017, and the balance by 2019 for the crossing to be completed by 2021. But Beth is confident that they will raise the money needed.

Part of the fundraising is happening this week with a 40-mile hike, which is starting at the proposed site of the Liberty Canyon wildlife crossing in Agoura Hills, and will take three days. “We’re going to hike the backbone trail in the Santa Monica Mountains,” says Beth. “Then we start getting into towns, cities and roads. In the morning of the fourth day, we’re going to end up in Griffith Park, pretty much where P22 entered. This will show what P22 had to go through to get here.”

Beth will be leading the 40-mile hike from the site of the wildlife crossing, and will be wearing a mountain lion radio collar so people can track her movements online. She’ll also be carrying a cardboard cutout of P22, inspired by one of the National Geographic photographs.

"It's going to be an inspirational journey for many people," says Miguel. "They are going to be inspired by the places they visit and the people that they see. There are a lot of people along the way who care about wildlife, especially urban wildlife like P22.”

The hike is going to end on October 22nd, because it’s 22, and P22 day. As Beth says, “We’re going to celebrate with a day-long festival of music, arts and celebrity and fun.” Gerry Hans, President of Friends of Griffith Park agrees, “We’re really happy that the culmination of P22 day and P22 walk is going to happen right here in Griffith Park.”

Working with LA based cinematographer Alex Rapaport, the aim of my film is to raise awareness for the plight of mountain lions living in Los Angeles, including the issues of fragmentation and connectivity.

But that’s not the only dangers that urban wildlife is facing. Over 80% of mountain lions are said to have ingested rat poison in some form, whether it is by catching and eating raccoons and coyotes that have consumed rats which have eaten the poison.

The effects of anticoagulant rodenticides are devastating upon wildlife; the animals bleed internally, they suffer side effects like mange, and die a slow and agonizing death.  Poison Free Malibu who I interviewed for the documentary, are grass roots activists who have done incredible things to ban rodenticides in shopping centers and housing associations.

The hope of this film is to bring attention to the mountain lions suffering from both rodenticides and lack of connectivity. A new study suggests that mountain lions could die out in the next 50 years because of inbreeding, lack of genetic diversity and connectivity. Many people, including Los Angelenos are unaware of the problems facing their big cat neighbors.

“The Cat that Changed America” will be released next year and you can see the trailer on Youtube or on the film’s website. P22’s celebrity has influenced people to change our thinking and see cities as acceptable places for wildlife to thrive. I know that Angelenos and the rest of the world will fall in love with the story of a cat who can't find a mate.

(TONY LEE is an award winning producer and director who has been making films for over 25 years. He has developed successful formats for television and has worked with high profile talent in the UK and US. Tony has worked in California for 2 years for National Geographic Television and in New York City for Animal Planet. He produced and directed The Cat That Changed America.)