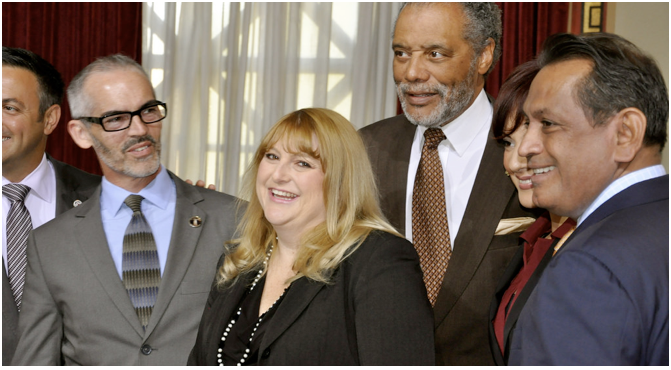 MY TURN-Lately, I've pretty much stayed away from writing about Neighborhood Councils. My CW colleague Tony Butka seems to have that handled. I don't agree with many of his statements but why beat a dead horse?

When I started writing for CW three years ago, Neighborhood Councils were my beat. I loved the idea of what they could do. One of LA's most hardworking volunteers introduced me to my own NC which, to be honest, didn't do much -- but it also stayed out of trouble. It was fortunate that the neighborhood it represented was fairly quiet. The Board members, especially the executive committee, treated their NC like a private gentlemen's club, putting in minimum activity and effort.

I was recruited to do outreach (there was no outreach committee at that time) and I am sure they have regretted that decision many times over. I didn't even know what an NC was before joining and I had lived in my neighborhood for almost twenty years -- proof that they kept a very low profile for their ten years in existence. Within two years, we had recruited some terrific new people, added new committees and pretty much worked with all of the NCs in our region. Everyone in the Southwest Valley knew who we were.

I saw firsthand what some dedicated folks who weren't afraid to put in the time and do some actual work could do for a neighborhood. It was exhilarating. Unfortunately, the old guard, who’d been running things since the NCs inception, finally energized themselves and defeated us in the next election. We had a great turnout though and walked away proud of what we had accomplished.

In my first few months writing for CityWatch, I wrote a series of articles entitled, "Is BONC BUNK?" It was an analysis of the Board of Neighborhood Commissioners that “oversees” the NCs citywide with some suggestions concerning how it could help make the system stronger. I was much kinder in those days so I left it up to you readers to decide.

Now I can answer my own question truthfully: YES...BONC is indeed BUNK. The question floating around is: Does the NC system need the BONC to function? It has very little power and that was probably done deliberately. The founders assured me that its description was kept very generic in the City Charter so that it could evolve.

Not only is BONC getting hit but the Department of Neighborhood Empowerment (DONE), the city department that manages the day-to-day operations of the NC system, is also getting beaten up. Grayce Liu, DONE’s General Manager, has an impossible job. She has a third of the staff she needs to handle the 96 NCs and gets more lip service than help from the Mayor and City Council.

It was thought when Council President Herb Wesson brought the NCs under his rules committee that things would improve. On the surface they did for a while. But the Council President isn't termed out until next year so he has no need to give the NCs much attention right now.

In the last few months we have seen an exodus of Commissioners. The first one to leave was Karen Mack, who was President for two or three years. Previously, she served on the Commission representing Mid-City, and was known primarily for falling asleep during BONC meetings. Her life away from BONC was far more productive -- working for non-profit organizations. She is also politically well-connected through her family.

When she became President she no longer slept through the meetings. But from what I saw, she showed very little enthusiasm, creativity or leadership. She and Commission Vice President Leonard Shaffer, who represents the South San Fernando Valley, devoted more time to consultations with the City Attorneys who attended the meetings than to finding ways to make the Neighborhood Council System better.

After Karen Mack left, the South Bay/San Pedro Commissioner Victor Lopez got fed up with all the bickering in the various NCs in his area and resigned. In May, Olivia Rubio, who represented East Los Angeles, tendered her resignation. She was the quiet Commissioner who never really made waves and seemed to be more absent than present at meetings.

The final blow -- at least for me -- was the unexpected resignation of Commissioner Lydia Grant, (photo above, center) the North San Fernando Valley Representative. This occurred at the most recent BONC meeting on Monday.

Lydia was the spark plug, the instigator on the Board. To say that the City Attorneys probably did a happy dance on Monday night is an understatement. While President Len Shaffer seems to believe that the BONC’s primary duty is to make City Hall happy, Lydia questioned almost everything. She was there to serve her stakeholders and made a point of visiting all of the NCs in her area during the month. She also spent time with other neighborhood councils whose representatives were not so committed.

I always wanted to clone Lydia. I may not have agreed with everything she said or proposed, but I saw her as an ideal volunteer -- prepared to give her nights, weekends and hours of phone time trying to make her eighteen NCs function better. I don't blame her for quitting. However, the NC system has lost one of its most powerful supporters.

For a while, I attended many BONC meetings – but none lately. It was like watching paint dry. Nothing significant got accomplished because the City Attorneys assigned to meetings always had a reason why the Board couldn't do something. They went to great lengths to stop things because they were so afraid of lawsuits against the City.

Two years ago, when there were several new Commissioners, I had high hopes for change. It started with a "retreat" that generated some really good suggestions. In the last two years, though, those new Commissioners became so beaten down by both the City Attorneys and the Board President that they gradually lost interest. I can't say I blame them.

Chairman Len Shaffer, who the Mayor's office appointed President for a second term, is a nice man who means well. The problem is he’s been seduced by the trappings of titles. He is still President of his low performing NC. I don’t see how he can handle both jobs effectively -- as well as his "day business."

NCs should have term limits. That is the only way they can prosper.

I did a little research on the importance of volunteers. California rates 36th in volunteer involvement. The state with the most volunteers, not surprisingly, is Utah.

Here are some interesting stats from 2014 about our metropolitan area, which includes Long Beach and Santa Ana. Volunteers are defined as persons who do unpaid work (except for expenses) through or for an organization.

Statistics released by the U.S. Bureau of Labor Statistics (BLS) in 2014 showed volunteering at a 10-year low.

According to the BLS, the volunteer rate declined by 1.1 percent to 25.4 percent of the population for the year ending in September 2013. Approximately 62.6 million people volunteered through or for an organization at least once between September 2012 and September 2013.

There are 1700 Angelenos serving on Neighborhood Council boards. Some of them have served on the same Board for at least ten years, and, even though times have changed...they haven't.

Serving on an NC tends to become more like belonging to a private social club, with outsiders made to feel unwelcome. Some volunteers are perpetual whiners who find fault with everything. Some are power happy and have delusions of grandeur. There are quite a few NIMBY representatives who don't want any change at all. However, the majority are decent hard working people who care about their neighborhoods. They care about their neighbors, too. And they care about this City.

I found this gem in my research that accurately describes the impact of volunteers:

"Try this little exercise: imagine if one day, all volunteers simply didn't show up? What would our cities, towns, state/provincial parks, schools, places of worship, and libraries look like? What basic needs would go unmet? What opportunities to grow, learn, and thrive as a society would be lost? The truth is you likely cross paths with a volunteer at least once if not several times a day, no matter where you are in the world."

Perhaps Cindy Cleghorn, Chair of the annual LA Neighborhood Congress should have a workshop on "the care and feeding of volunteers." In business we know that it is more profitable to keep an old customer than to constantly sell to new ones. We can recruit well...but keeping NC volunteers motivated and appreciated is another story.

(Denyse Selesnick is a CityWatch columnist. She is a former publisher/journalist/international event organizer. Denyse can be reached at: [email protected]) Edited for CityWatch by Linda Abrams.)