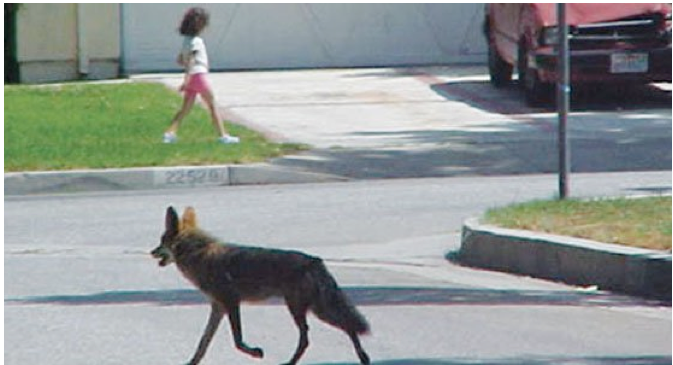 CO-EXISTENCE ALERT--I have 56 years’ experience with coyotes first hand. I am a college-educated, retired USDA Wildlife Specialist. I have lived among coyotes for a collective 210 days in remote locations in Arizona while collecting biological samples for the Center for Disease Control and Arizona Game and Fish Department. I have studied and pursued them in every way possible over these years. I have kept live coyotes on my property for the USDA for observation and urine collection for several years. And I’ve dealt with damaging and dangerous coyotes first hand and witnessed the death and the trauma they cause.

I know coyotes. They do not belong in town, in your community, in your neighborhood, or in your back yard. These wild animals are dangerous. They are equivalent to “urban terrorists” as they invade the urban areas of America because they are there to kill – it’s their expertise. They are not cute little wild dogs, they are not a friendly wild animal, they are not your friend in anyway; they are dangerous. Anyone who tells you that you can co-exist with these dangerous wild animals is irresponsible and putting your life, your family’s life, your children, grandchildren, pets, and property in danger!

Look closely at a few things they tell you to do to protect yourself from dangerous coyotes:

Let’s get real here, people! This dangerous wild animal is a trespasser. The coyote has proven to be a threat to humans, pets and property for decades. It is doing what criminals do, what stalkers do, and what terrorists do – and some would want you to learn to co-exist with them? Well then, let’s all learn to co-exist with muggers, rapists, stalkers, drunk drivers, and murders as well. After all, they have rights too. But do you really want to learn to live with a rattlesnake in the kitchen?

According to some unrealistic and perhaps deranged people, rattlesnakes, killer bees, alligators, grizzly bears, cockroaches, and others have more rights to live anywhere they want than we do. If these creatures (like snakes) take up residence in your back yard or under your house (like skunks) or in your attic (like bats) – well, that is their right.

Their proponents say, “We have moved in on them” … but they were there first! Poor misunderstood wild animals … you must “learn to live with it!”

There is a reason that all across America there are no closed hunting seasons on coyotes. Many states do not even require hunting licenses to pursue coyotes. There are no bag limits on coyotes either. There is a reason that there have been bounties paid on killing coyotes for over 50 years. The state of Utah now pays a $50 bounty for each coyote killed. There is a reason that one federal agency has had a huge focus on controlling coyotes in America for over 100 years: coyotes are abundant. They cause a huge amount of personal property damage where ever they go. Coyotes are dangerous to humans, pets, and livestock and cause tens of thousands of dollars of damage each year in America.

Everything I have stated here is simple to research and very easy to verify. The USDA has a fulltime well-staffed research center in Utah that studies coyotes every day. These are dangerous wild animals that must be monitored and controlled. Coyotes do not belong in your community, your neighborhood, or your back yard. And the so-called “coyote experts” seldom are that. Most have not even been alive for as long as I’ve been dealing directly with coyotes.

Public officials encourage “co-existence” with coyotes because they don’t have the budget or the experience to deal with them. They just hope the problem goes away. But it won’t and if they were real experts they would know that.

Activists like those who run Project Coyote have the single agenda of stopping all hunting in America -- and they want to start with the coyote. They want to raise money from you by giving you a false message with unrealistic claims about these dangerous animals. Much of what they claim is simply made up!

I encourage all of you to take action like some other communities have. Green Valley, Arizona rose up and fought back against a single coyote that bit eight different adults. They killed this bad coyote and the attacks immediately stopped. Long Beach, California is fighting back by forming a citizens group to demand something be done about their increasing coyote problem. They found that the City of Long Beach has no budget for this control and the California Fish and Wildlife Department is doing basically nothing because they also have no budget for it. Printing up a few pamphlets will not stop the invasion and danger.

So, what has caused this invasion? This terrorism? It is easy to figure. Across America, coyotes are showing up where they have not been in the past, looking for something to kill and eat on the roof tops of New York City, in the back yards of Pennsylvania, in downtown Chicago, and in many other similar locations. The expansion is due to the loss of rural habitat, reduction in hunters and the increasingly abundant amount of resources available in town. There is more water, more cover, and more trash to rummage through. There are pets to eat, plenty of cool shade, lots of food and most importantly, “no pressure” from other coyotes or people pursuing them.

Urban America is a safe place for these dangerous wild animals. And it’s becoming even safer as misguided people try to “co-exist” with them. Do not fall for it. Fight back against this new urban terrorist!

Other perspectives on urban coyotes

(James A. Schmidt is a retired USDA Wildlife Specialist.) Edited for CityWatch by Linda Abrams.