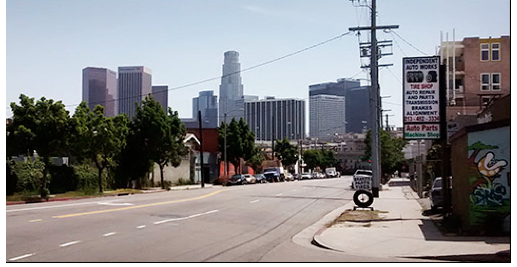 JUST SAYIN’--Living in Los Angeles allows one the opportunity to enjoy the full gamut of those peculiar sensations commonly expressed in the abbreviation, “WTF!” (Exclamation point mandated.) From bemusement to indignation to outright incredulity, our great city’s policies and practices seem calculated to inspire consternation. Especially if you should ever set foot, or wheel, on the streets.

I have recently begun employing the handy diagonal made by Second Street from the downtown tunnel to Echo Park. This route, which I have used for different purposes many times in the past, connects the ever-growing biking culture of the Central City to that of Echo Park, Silver Lake, and East Hollywood. I now use it to get from the Pershing Square Metro stop to “Historic Filipinotown,” where I work part-time. From Hill Street to the Beverly Boulevard overpass there are useful if inelegant bike lanes. True, the ones in the tunnel are buffered by both paint and flexible bollards (some of which, however, have been obliterated), but said lanes are full of trash, mud, and broken glass. This somewhat diminishes the comfort and utility they are allegedly designed to provide.

Nevertheless, they are bike lanes, and they continue to the aforementioned overpass. Where they just stop.

So, after you work your way through the confusion of a five-way intersection under a bridge, you find yourself sharing the road with speeding cars and trucks.

Well, when there are any. It seems that rush hour, lunch hour, any hour, there is not too much traffic here, and much of what there is pedal-powered.

This lack of traffic is unfortunate, as the wide-open lanes just encourage motorists to speed, which they do, as they always do, with insouciance. (A French word meaning, “Doesn’t give a damn.”)

Bike lanes are vital here, as I see many, many cyclists using the route, which is a natural for velocipedalists. Even in the recent rains, cyclists were out in force. Motorists, not so much.

Still, the street seems geared to the desires of speed demons: waiting for a green light at a cross street will see you aging in place long before you can cross. Pedestrians just give up and chance the traffic by “jaywalking.” Cyclists just grind on up to Echo Park in the battered right margin of the overly-generous lanes. Buzzing incidents are common–they’ve happened to me.

So why no bike lane?

Don’t ask me. Ask LADOT. Email them at bike.program@lacity.org. Maybe they’ll have an answer. Paint’s too expensive, or Cedillo might frown at them, or something like.

It would be nice to have bike lanes (and reasonable pedestrian crossings) along this natural bike route in a neighborhood where few own cars.

Oh, LA! They don’t call you La-La Land for nothing, do they?

(Richard Risemberg is a writer. His current professional activities are focused on sustainable development and lifestyle. This column was posted first at Flying Pigeon.)