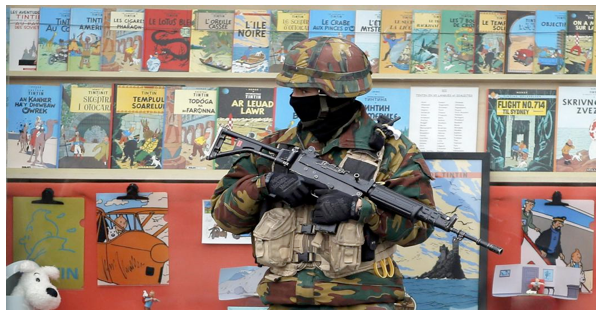 JUST THE FACTS-This week we witnessed another horrifying terrorist attack on innocent people, this time at the Brussels airport and at a subway station in that city. The current victim count is 31 innocent people dead with 300 plus wounded. This brings to mind the previous terrorist attacks that have taken place in America and other parts of the world in recent years. Some are closer to home while others are across the sea in faraway places.

Recently, we saw the terror attack in San Bernardino in which our police, fire and medical personnel swung into action to confront this deadly situation. As the memory of San Bernardino faded for some, the new attacks in Brussels have now shaken us into reality once again. There are people in this world who want to kill us, to spread fear and anxiety around the globe -- not for money or property -- but for a cause. A crazy and insane cause.

I cannot forget the recent San Bernardino attack – “Breaking News” across the globe. The world watched on TV as brave law enforcement personnel engaged and contained the suspects in a gun battle. As the federal, state and local law enforcement communities continue their follow-up investigations here in California, we now see Brussels under attack by the same type of terrorists.

Unfortunately we see an alarming rise in the crime in LA and the rest of the country – crimes of robbery, burglary and the other property crimes. So where do we go from here? It’s time for each of us to stand up and exercise our 2nd Amendment rights, to purchase a gun to protect ourselves and our families. We should not wait since Los Angeles could end up like San Francisco with no gun stores in the city.

Current statistics show a major increase in crime throughout Los Angeles. It is time to protect yourself and your family because many in elected office do little to provide a safe city for us. A surge in violent crime in South Los Angeles has once again caused the redeployment of many officers from the Valley and other parts of the city to South Los Angeles. Just think about it: with a 7 to 10 minute response time to your call for police service, who is going to protect you in your community? Mark my words: the time to prepare is now. Not after you become the next victim.

My next article will focus on the out-of-touch Los Angeles Police Commission and the Commission leadership that is more concerned with image than public safety for you and your families.