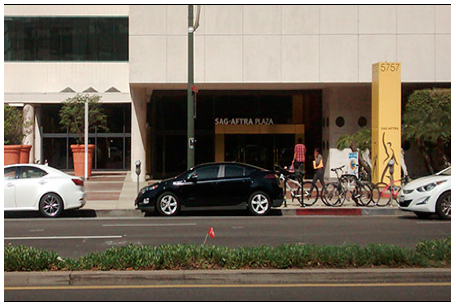 PARKING SOLUTIONS 101-Yes, you can barely see the bicycles in the photo above…

and perhaps that’s exactly the point. The five bicycles take up so little room compared to the two-and-a-half cars! What’s more, in this case they take up room that would otherwise go unused: the little strip of walkway just inboard of the curb, where parking meters, signposts, lamp standards, and other minor street utilities make their home.

Four of the bikes are on two official LADOT sidewalk bike racks, and one is locked to a parking meter. There are five other racks to the west on this single block of Wilshire Boulevard in the Miracle Mile -- two in front of the inevitable Starbucks, one in front of the Johnny’s New York Pizza, and two more in front of The Counter. They all accommodate customers and employees of the businesses in that large office building you see in the background…and they do it far more efficiently than cars can.

Indeed, the building has a massive parking structure behind it, taking up a good half of the block -- more land area than the productive building itself requires.

This is probably a bigger sin than pollution or even global warming, because, in taking up so much space, they require us to put all the human elements of our cities farther apart, condemning us to longer (and usually lonely) commutes, as well as keeping us apart from each other in little metal cells. In short, cars destroy not only the atmosphere and the watershed; they destroy human culture itself.

This has recently been expressed most eloquently by my friend and colleague, J. H. Crawford, in a Washington Post article entitled, “The Car Century Was a Mistake. It’s Time to Move On.”    Click on it for a good, short read on the subject. Crawford knows it well.

Meanwhile, if you see a spot on the block that truly needs a bike rack -- wherever you may be in the City of Los Angeles -- just click on the link below and ask LADOT to put one in. Believe it or not, they actually will.

If all goes well -- and it usually does -- a bike rack will appear within a couple of months.

(Richard Risemberg is a writer. His current professional activities are focused on sustainable development and lifestyle. This column was posted first at Flying Pigeon.)  Edited for CityWatch by Linda Abrams.