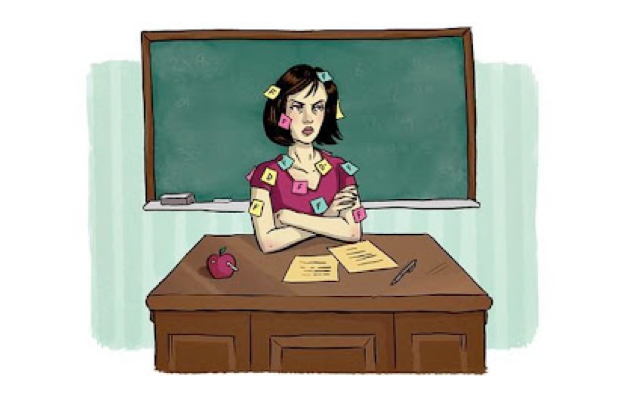 EDUCATION POLITICS-The Los Angeles Unified School District (LAUSD) has carried on a disingenuous and premeditated war for the last ten years against thousands of expensive high seniority teachers. This has occurred while their union, United Teachers Los Angeles (UTLA), has done nothing to defend them -- something they are obligated to do and have the power to do under the LAUSD-UTLA Collective Bargaining Agreement. And now, the self-dealing UTLA "Power Slate" leadership running the union has the chutzpah to ask for more dues, even as it continues to sell out its membership by colluding with LAUSD administration to attack senior teachers.

In 2006, then LAUSD head of Office of Risk Management and Insurance Services Director David Holmquist -- now Chief Legal Counsel for LAUSD -- laid out in the Health and Welfare Benefits: Retiree Health Actuarial Valuation Update and Retreat Preview Presentation to the Audit, Business and Technology Committee how senior teachers salary and benefits were pushing LAUSD into the red he subsequently decided to go after them. Over the next 10 years, Holmquist systematically targeted senior teachers while UTLA leadership hasn't lifted a finger to help them. This group accounts for 87% of all teachers who have been hit with false charges and prematurely forced out of their careers.

Instead of bringing one unified legal action in defense of these senior teachers (as UTLA has power to do under the LAUSD-UTLA Collective Bargaining Agreement) UTLA instead divided up the claims of these similarly targeted teachers. UTLA is paying their law firm, Trygstad, Schwab & Trygstad, to walk these teachers through the dismissal process, encouraging many to take early retirement and without advocating on their behalf as they had the power and legal obligation to do. (see below)

1.0 Grievance and Parties Defined: A grievance is defined as a claim that the District has violated an express term of this Agreement and that by reason of such violation the grievant's rights under this Agreement have been adversely affected. Grievances as defined may be filed by the affected employee or by UTLA on its own behalf or on behalf of an individual employee or
group of employees where the claims are similar. On filing a grievance on behalf of a group, UTLA need not specify the names of the employees, but must describe the group so that the District has notice of the nature and scope of the claim.

Instead of defending its rank and file, a union's primary function, UTLA leadership converted a substantial part of its strike fund into political contributions without notifying the membership or any of the committees. And then they pleaded poverty.

Since even before the administration of UTLA President Warren Fletcher, UTLA leadership has habitually lied, saying that it carried member defense insurance with a company that was actually no longer in business. They even campaigned for ratepayers to join the union by assuring them they would be covered by this insurance policy that never existed.

Initially, UTLA was self-insured when the number of LAUSD targeted teachers was small, but over the last 10 years with literally thousands of teachers being targeted for removal by LAUSD, UTLA has continued to do absolutely nothing to defend these predominantly senior teachers. Instead, they have allowed teachers to be systematically targeted and removed on false charges by LAUSD. This continues unabated to this day.

If a hike in dues was necessary to defend teachers, why did UTLA leadership wait 10 years until thousands of senior top salary teachers had been targeted and removed by LAUSD? All this did was empower LAUSD administration to go after even more senior teachers, cutting significantly the dues that could have been collected by UTLA.

Why was this allowed to happen? Simply stated, there has been no continuity of leadership advocating on behalf of teachers’ best interests. The union’s law firm, Trygstad, Schwab & Trygstad, has been allowed to run UTLA for 43 years without any written agreement between them and the union. Officers come and go, and like a mirror image of LAUSD leadership, UTLA's entrenched bureaucracy keeps selling out its members.

If the present proposal of 30% dues increase becomes policy, future increases could be instituted without rank-and-file voting. Without this agreement, were national affiliates to raise dues in the future, UTLA could still at that time conduct a vote of the entire membership so they could determine whether they wanted to have their dues raised or not. This provides leverage to ensure that their affiliates would have to provide sound rationale for any dues increase. It would also provide leverage to UTLA leadership, who could pressure affiliates into advocating a clear message to justify the need for a dues increase. However, if the Supreme Court rules in favor of Friedrichs v. California Teachers Association in May, as expected, defendant CTA will undoubtedly seek to raise dues on UTLA members later this year. One should never give up a right to vote - as UTLA is now asking its membership to do.

This current vote on raising UTLA dues includes an online option, but to date UTLA has not allow delegates to vote via online voting options (in violation of the online voting initiative,) since this would encourage greater rank and file participation and the likelihood that the raising of the dues proposal would not pass.

Furthermore, the decision to use an outside vendor to conduct the vote was done secretly by the Board of Directors, and the House of Representatives was never informed or allowed to weigh in on that decision. Traditionally, any election run by an outside vendor must also been overseen by the UTLA Elections Committee -- yet the Board of Directors unilaterally decided to exclude the Elections Committee.

For months, UTLA leaders have been claiming that it can't buy group legal insurance for housed teachers, because UTLA can't offer differing services to each affiliate. This claim, on its face, is false, since each affiliate already offers differing discounts on auto, travel, and other insurance services -- these services are not and have never been identical. UTLA has not responded to this criticism, which was pointed out months ago.

It has been well publicized that UTLA aspiring leadership met secretly with then Superintendent John Deasy at Drago Restaurant in the middle of the last big UTLA election. UTLA Power Slate leaders have claimed this meeting was to discuss problem principals, an explanation that, on its face, doesn't make sense. Why meet at Drago and not LAUSD or UTLA? And why was former President Fletcher intentionally not told about the meeting? It seems more likely the meeting was to agree to delay talk of a pay raise in exchange for allowing candidates time off to campaign during school hours. As a result, a pay raise was delayed for an extra year -- money directly taken out of teachers pockets as UTLA leadership colluded with management.

It is also worth mentioning that for years UTLA leaders were reimbursed by UTLA for money they paid into the State Teachers Retirement System (STRS) -- in effect, allowing them to double dip and they did not report this on their taxes. UTLA leaders claim this policy is no longer in effect, but there is nothing in writing to support that assertion.

Adding more self-dealing to the fire, UTLA continues to claim that it fights the "charter privatizers." But right now former UTLA President John Perez and UTLA Staff Member Michael Bennett serve as the Board President and Vice President respectively of Montague Community Charter School. To date, UTLA has not disclosed their compensation levels and whether or not they are receiving any additional compensation from other outside entities such as the California Charter Schools Association. On a related note, both were former UTLA Officers who benefited from the STRS kickback. As Mr. Perez was a UTLA leader for over 10 years, he received over 10 years of this kickback.

In general, UTLA has continued to operate with an air of secrecy; it doesn't even disclose to members how they spend money. In fact, in 2015, at a UTLA House of Representatives meeting, one member asked, at the microphone, for more detailed budget and expense information -- more than the four page document provided to elected members of the House of Representatives.

At the time, UTLA Treasurer Arlene Inouye, a member of the Union Power Slate stated in response, at the microphone, "If we provide that to you, we might as well be giving that to the district." What is UTLA so afraid of? If they want a 30% dues increase, the, at a minimum, shouldn't they tell us right now how they have been spending – or not spending -- our dues money? If UTLA is responsible, why not celebrate that by operating transparently -- and asking LAUSD to follow UTLA's example. Instead, UTLA is silent about district waste and contracts, and is even under federal investigation into how they may have misappropriated money from the strike fund:

National affiliates have done a terrible job over the past twenty years advocating for public education, which is why we find working conditions to be what they are today. Their big solution is to organize a "walk in" in February, another do nothing photo op. In Detroit, on the other hand, rank and file teachers are organizing sick outs without the support of their union leadership. We need to start fighting affiliates cozying up to privatizers, union-paid holidays disguised as host conferences, bloated bureaucracies, spending millions on meals and travel, and now they want to give themselves even more money.

Under these circumstances, do you really want to give a blank check to UTLA and their national affiliates who have stood by for years allowing professional teachers to be savaged by LAUSD and districts like it around the country? I urge you to vote no.