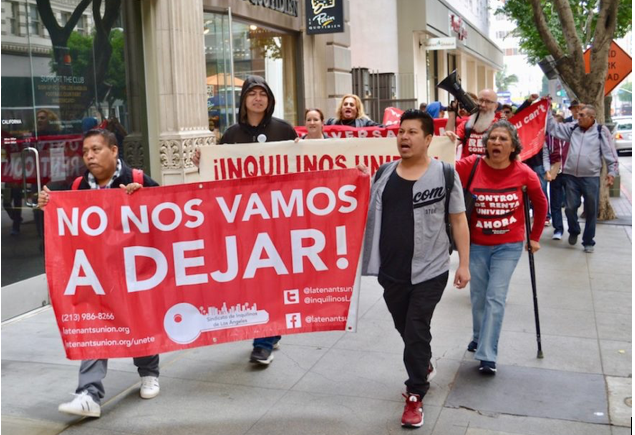 TRANSIT TALK--Because I am a transit rider since 1992 in what is many times called a not-transit-rich Los Angeles, I am quite interested in this bill. I am a transit rider because I am worried about air pollution in the Los Angeles Basin which after years of improvement is now slipping backwards toward more polluted. With the Trump Administration and EPA Secretary Pruitt ready to gut mandatory vehicle mileage requirements it seems certain air pollution will now get worse.

The carbon gases from vehicles creating air pollution lead to the worsening of global warming and the destructiveness of climate change. A sure way to reduce these carbon gases is to drive less, and that is why I ride buses and trains.

The bill states its has lofty goals to lessen climate change by reducing carbon gases from vehicle exhaust. I share these goals, but the bill’s authors and its supporters seem to have very little knowledge of how transit works in Los Angeles, and certainly do not seem to have any regular, long-term experiences of riding buses and trains.

Senate Bill No. 827, as Amended in Senate March 01, 2018, was introduced by Senator Wiener, with Principal Coauthors Senator Skinner and Assembly Member Ting, and Coauthor Senator Hueso. It has stirred a hornet’s nest.

The bill continues “,,,,,,,would define a transit-rich housing project as a residential development project the parcels of which are all within a 1/2 mile radius of a major transit stop or a 1/4 mile radius of a stop on a high-quality transit corridor. The bill would exempt an eligible applicant who receives a transit-rich housing bonus from various requirements, including maximum controls on residential density, maximum controls on floor area ratio that are lower than a specified amount, minimum automobile parking requirements, maximum height limitations, and zoning or design controls that have the effect of limiting additions onto existing structures or lots that comply with those maximum floor area ratios and height limitations. The bill would require an eligible applicant who receives a transit-rich housing bonus to provide benefits to eligible displaced persons who are displaced by the development,,,,”

The bill has some interesting terms, such as “high quality transit corridor.” It sounds so rich an appealing. Who doesn’t want quality? But what is it? According to the bill it is “(d) “High-quality transit corridor” means a corridor with fixed route bus service that has service intervals of no more than 15 minutes during peak commute hours.”

First, the bill does not define “peak commute hours.” How many vehicles must pass a fixed portion of a street/corridor per hour to be a commute hour, and then how many more vehicles above that are needed to make it “peak commuter hours?”

Gridlock during non-defined commuter hours is increasing. While I do ride a lot of buses and trains, I also drive, and drive in gridlock-it drives me crazy with the wastes of time, the stresses, and the massive amounts of pollution from vehicle exhaust. The bill does not spell out the exact commute hours, nor how they are calculated, nor how to cope with expanding commute hours.

In service intervals of “no more that 15 minutes” there is no accounting on why that time frame is referenced. There are pages on development, construction codes, and “displaced persons who are displaced by the development,,,,”

While Metro is operated by Los Angeles County, many individual cities in the county have their own bus service. In addition to Metro buses and trains I constantly ride buses operated by Culver City and Santa Monica. If those cities, and others, do not like this bill what would prevent them from increasing the service intervals on all of their routes to over 15 minutes to avoid the claws of this bill? This would exempt them from the bill and its supposed transit richness.

This would obviously be a tremendous disservice to transit riders who would then have to wait longer for buses, but the bill’s authors and its supporters do not seem aware of this.

Then there is the “Transit-Rich Housing Bonus” which has such a nice ring. Anything “rich” must be of worth in today’s world of constantly seeking riches and a billionaire president. It would appear the “high-quality transit corridor” is “transit-rich. But what is “Transit-Rich?” According to the bill it is, “Transit-rich housing project means a residential development project the parcels of which are all within a one-half mile radius of a major transit stop or a one-quarter mile radius of a stop on a high-quality transit corridor.”

“High-quality transit corridor” is a Trojan Horse so the developers, construction companies, and building owners can get a Trojan Horse “transit-rich housing bonus.”

The bill makes it seem the proposed mega developments will help transit riders who will be living near a “high-quality transit corridor.” This creates the illusion that transit riders will able to take a bus or train any time while living in a space which received the “transit-rich housing bonus.”

This is transit ignorance and taking advantage of transit riders. The the bill does not help transit riders one inch above what is already in existence. There is nothing in the bill to add to trains and buses to truly make it transit-rich.

While a great number of transit riders are on buses and trains during commute hours, many ride off-hours when service, or had the bill’s authors had transit knowledge they would have used the transit term “headways,” is much less frequent.

If a person needs to get to or return from a job early in the morning, in mid-day, or in the evening or night bus, the headways of train and buses can be longer than 15 minutes. The times can stretch from thirty minutes to nearly one hour. Plus, most buses and all trains do not operate between around 2:00-4:00AM.

I like to go to concerts and movies, museums, and restaurants by buses and trains. At night the headways are less frequent, and this makes for constantly looking at the bus schedules and clocks to not miss a bus since the next one is not coming for over forty minutes, or I may be catching the last bus of the evening. Sometimes I leave movies early so I can catch the first of two buses home.

If the bill’s authors want to attract transit using Gen Xers or Millenials who like the nightlife, their definition of “transit-rich” will not work. The bill’s authors and its supporters in construction, academia and YMBY’s should have known this.

This bill is not transit-rich, it is taking advantage of transit riders to build very large buildings, which while given a nice sheen in the bill, could be built for the higher end market with a few units thrown in for those those with lower incomes.

If there is any kind of transit-bonus it needs to be given to the transit riders, and paid for through fees from the developers, the construction companies, and in perpetuity by the buildings owners with these fees paid to the local governments and audited so that they are not passed down to the low income tenants.

These fees should pay for:

I am a native of Los Angeles. I have seen the city’s continuous growth, and I know that if the city does not grow it will stagnate, and stagnation leads to downfalls. I support growth, but this bill leaves a bitter taste, for if the bill’s authors were truly caring about reducing global warming gases they would not pull up this Trojan Horse of a bill using the backs of us transit riders in order have the state over-ride local building codes.