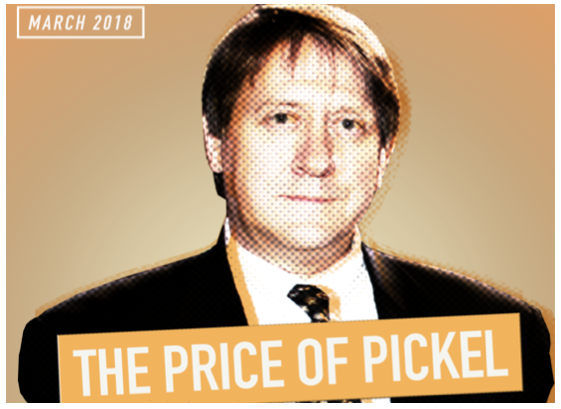 EASTSIDER-Back in 2015, a nonprofit group from the Republic of Santa Monica called Consumer Watchdog, went after the DWP Ratepayer Advocate, Fred Pickel. Now they’re back, again demanding his termination. The question is, why?

Hang on, folks, this one may be a bit longer than my usual post. Still, it’s very important to do some fact checking on Consumer Watchdog, who evidently doesn’t want us to know who is funding its own editorial slant.

At the time, their main beef seemed to be that Pickel had the temerity to suggest that for DWP Ratepayers, the Delta Tunnel Project would be affordable. “Pure fantasy”, cried Consumer Watchdog Advocate Liza Tucker.

The only problem is, the Ratepayer Advocate’s analysis is mathematically sound, as I have writtenbefore:

“The Committee also asked the Office of Public Accountability, or Ratepayers Advocate as we call them, to weigh in on the cost of this plan to DWP customers, and their report is included as a separate document in the Council File. To save you having to read the actual Report, the short version is that they estimate an increased cost to DWP customers of $1.73/month for typical single family residential users. That’s based on an average of a wide range of possibilities with a best-case scenario of $0.873/month and a worst-case scenario of $4.31/mo., and their figure includes both the rate increase itself as well as an increase in the MWD property tax we pay”

Now I understand that views on the Delta Tunnels depends on your ideological bias, and the Consumer Watchdog article reflects the hard core environmental point of view. Understandable, but not math.

On the other hand, if you want to make sure the tap turns on and gives you water no matter what, read The Case for California WaterFix, which argues that reliability and the baseline volume of water needed by Angelenos no matter what, support the proposition of the Tunnel.

Evidently unhappy with the lukewarm reception of its September effort, Consumer Watchdog doubled down and had Liza Tucker produce a very slick 15-page hit piece against Mr. Pickel called,“The Price of Pickel,”saying on the cover that he cost you and me $7 billion bucks. Wow! That’s a big number, even for the Mayor or City Council, much less a techie PhD type. So, what’s underneath the headline?

In their short 2-page summary (including a large picture), they make the Ratepayer Advocate personally responsible for some $7 billion dollars as follows: all the DWP rate hikes, gas-fired power plant upgrades, the entire IBEW Union contract raises, including estimated unfunded pension liabilities, the Rate Transfers the City Council takes from the DWP, and the entire DWP Billing System fiasco. They do this, I assume, because they know no one is going to really read 15 pages of almost anything.

Of course, it’s a great hit piece, but factual bullshit. The Ratepayer Advocate and the Office of Public Accountability, as the Charter creating the Department is actually called, doesn’t have the authority to do any of these things.

In fact, they have no specific authority, andare prohibited from running around and actually advocating for you and me, the DWP ratepayers. That’s right, can’t do it. You can read about it in my CityWatch article called,“Why is Everyone Pickin’ on Pickel?”,written back in 2015 when Consumer Watchdog went after Mr. Pickel the first time.

The piece goes over exactly what the Charter Amendment did and did not do in setting up the Office of Public Accountability. Hint:Pickel and the OPA have absolutely no authority to do anything beyond analysis, assuming that they can even get the data they want and need. They cannot run around advocating against the City Council or the DWP.

Now that is too bad, and a real disappointment for those of us who fought for a real fire breathing, rip-roaring, independent citizens advocate with power and authority.Unfortunately, this being LA City, the Council defanged the proposed new department long before any Charter Amendment hit the ballot box. Parenthetically, I don’t recall Consumer Watchdog being anywhere around back then.

What’s the Deal with Consumer Watchdog?

So why does Consumer Watchdoghave it in for Fred Pickel? We know one reason from their September CityWatch article: He’s not a gung-ho environmentalist who will simply argue against such a capital project in the face of empirical evidence that it wouldn’t cost too much for DWP Ratepayers.  He did what the Charter said he could.

If Consumer Watchdog wants to go for a Charter Amendment to morph the office into a real consumer advocacy shop, then I for one am all in. But remember our last attempt, mostly through the Neighborhood Councils, went down 15-0 with the Mayor weighing in to defang the Office. I could be wrong, but I don’t remember Watchdog being anywhere near that bloodbath.

What the OPA is and can do is a public policy issue, and a worthy one. But calling out an individual who, by the terms of the very Charter Amendment, can’t really fight back is unworthy of Consumer Watchdog.

Since I’m on a roll, here’s one I’ll bet you don’t know:Consumer Watchdog has its own set of issues they don’t talk about. Donors are shielded in a shroud of secrecy! As the Nonprofit Quarterly put it in December 2017, “With Watchdog’s  Donors, It’s Do As I Say, Not as I Do.” Interesting, isn’t it?

If someone breaks the secrecy shield, as the LA Times recently did, it reveals big bucks going their way from none other than Airbib’s Chris Lehane. Yup, Chris Lehane, former hit man lobbyist for Bill Clinton during his female woes, along with Chris’s business partner, Mark Fabiani.

The other naughty bit most folks don’t know about Consumer Watchdog is that a major (publicly reported) source of their income has been from suing companies who want a rate increase from the California Department of Insurance. That’s right, under Prop 103, they scored something like $849,000 from the State of California in 2011.

Just look at this 2014 article from Ballotpedia, a reputable neutral Encyclopedia source of matters political (the latest I could find).

My assumption is that this ad hominem attack is at least partly designed to drum up fundraising from environmental groups and Airbnb.

If Consumer Watchdog is serious about making the Ratepayer Advocate more effective, a little support would be nice.

Remember, the OPA has always had difficulty even getting basic data to analyze, and that statutory mishmash continues today.  If you look at Council File 16-093 in the CAO’s Report, it clearly states that:

“Since the inception of the Office, the OPA has faced challenges in receiving timely information from DWP...”, and“To address the OPA’s concerns regarding continued use of the data request coordination process, the City Council may choose to adopt reinforced ordinance language favoring ‘books and records’ access.”

English translation: not only does the RPA have to make nice to get any information out of the DWP at all, they have no right to the information. And just to be clear, you will be unsurprised that the City Council did not strengthen any Ordinance language to help out the RPA. Shock.

C’mon folks. The Ratepayer Advocates office has no authority to order either the DWP or the City Council to do anything because the Charter deliberately bars them from acting as a true advocate in matters DWP. Blame the Council and the Mayor. Go after them. I’m all in for that fight.But don’t diminish your reputation for positive advocacy by attacking the victim of the Charter amendments.