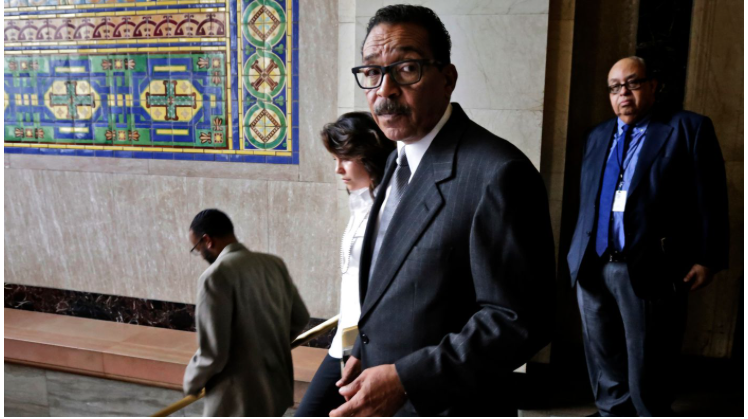 @THE GUSS REPORT-In a move that could ultimately backfire on the city’s ongoing legal efforts to keep boisterous critics away from Los Angeles City Council meetings, its president Herb Wesson was caught on video – twice – verbally and physically taunting one of his loudest ones.

At the 2-hour, 5 minutes and 25 second mark of last Friday’s meeting (you will need to move the video’s cursor to advance to that point) that critic, Armando Herman, can be seen silently making faces approximately 25 feet behind Wesson during nearly 2 hours of presentations preceding the city’s agendized business.

As the LAPD ejected Herman from the room, Wesson is then seen walking back to Herman and, while hiding behind burly cops,verbally and physically taunted him. The diminutive Wesson didit again 15 seconds later, shouting to Herman“bring it on”along with hand gestures that seemed to invite a fistfight. (Note: I was situated nearby and saw and heard Wesson’s taunts.)

It’s ironic, given that Wesson in the past year has expressed fear of violence from some of his critics.  The video proves that it is Wesson who repeatedly baits and instigates, while on microphone, telling everyone else to stay calm and apparently forgetting the cameras present.

Wesson’s videotaped actions also give credence to Herman’s claim that after he was ejected from a meeting last Wednesday, Wesson allegedly taunted him outside of the building (where he and is staffer son Justin are regularly guarded by LAPD during his cigarette breaks) by taking off his suit jacket and yelling at him to “come on with it.” When asked about that incident, Wesson laughed, but did not deny the allegation.

There appears to be more than a simple “he said-she said” going on at City Council these days.

Wesson, who has instituted increasingly draconian ways to limit public comment, not just by the continually present gadflies, but by members of the general public, has utilized the tactic of declaring public comments that are clearly on-topic but generally offensive to be off-topic and disruptive, and ordering the LAPD to forcibly eject from meetings people who are critical of his policies.

On January 30, another semi-regular critic named Patricia McAllister, who is African-American, made a colorfully on-topic comment about an LAPD reward for tips to help solve a murder, which Wesson determined to be “disruptive,” and ordered her forcible ejection. In her case, an LAPD senior lead officer arrested McAllister even though her behavior was no different than Wesson’s white and Latino male critics. But the handcuffs were quickly removed from McAllister, who was un-arrested as soon as witnesses started to videotape the incident.

More troubling is that LA City Council has threatened an orchestrated effort to manipulate the legal system to silence its most vociferous critics.

After Herman’s ejection on Wednesday, Councilmembers jumped up to stunningly demand that City Attorney Mike Feuer be brought in to obtain temporary restraining orders (TRO) against people who speak offensively (and sometimes brutally) at public meetings, even though an objective observer would likely determine that those comments are on-topic.

This is a battle which, if it ever reaches a courtroom, the city will likely lose. And if it does, it will further empower the critics it is trying to silence. In fact, City Council’s demand for an appearance by Feuer himself may have already backed the city into a corner. If Feuer doesn’t move forward with an attempt to get TROs against critics, look for those critics’ hostilities to increase.

But front and center in the city’s charade is the question of why Wesson doesn’t appear to have also asked for Feuer’s help to obtain a restraining order against an influential land developerand major campaign donor, who allegedly threatened to use an AR-15 assault weapon at a recent meeting held at Wesson’s field office. That story is documented in this column by CityWatch’s Tim Deegan.

The City of Los Angeles has in recent years spent a fortune on legal fees losing one free speech battle after another, most visibly to Michael Hunt, who is African American, and to David “Zuma Dogg” Saltsburg, a Venice street performer whose colorful commentaries at public meetings about event fee waivers and the CRA helped bring an end to those wasteful activities.

California, and the County and City of Los Angeles are in terrible shape, as documented by the mountain of social, fiscal and political issues they currently face. There are but a handful of people who go to these meetings to expose what amounts to astounding levels of government incompetence and corruption. With each squeeze of the 1st Amendment by Wesson, the gadflies expertly pivot. With Feuer about to be called front and center, the city may have exposed its hand when it should have folded and waited for the speakers’ comment time to simply run out.