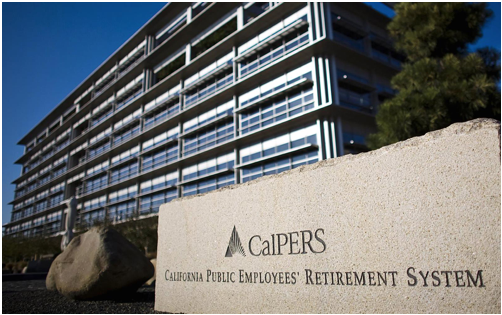 EASTSIDER-Whatever happened to staid old CalPERS and its ho-hum “under the radar” elections? Evidently a lot. The contested election currently underway is exposing some serious fracture lines in the way they run those elections!

I wrote about the upcoming election a while ago in “CalPERS is Having an Election, and What You and I Can Do About It.”

Well evidently, somebody got worried that their hand-picked insider candidates could lose. So...

The Status Quo Attacks Back

In an insider blog of the Sacramento Bee, The State Worker, there was a recent hit piece against outsider Michael Flaherman, and of course in favor of the Union backed candidate David Miller. You can find it here.

The Union (California Association of Professional Scientists) was able to use the Public Records Act to magically obtain thousands of pages of documents, including hundreds of pages of old emails between Flaherman and CalPERS board members making a pitch for them to hire him to root out hidden fees from the opaque investment funds which got CalPERS in trouble.

Wow, I’m impressed. When I make a Public Records request to CalPERS, I usually get blown off with a bunch of attorney-client privilege gobbledygook…that is, after extensions of the time before they respond at all. Not useful information. Gee, I wonder if General Counsel Matthew Jacobs and the staff are playing favorites? Say it ain’t so.

Of course, the Union and the Miller campaign characterize all of this as showing that Flaherman is somehow a shill for Wall Street, although I am somewhat puzzled as to how a guy who is working for UC Berkeley in the area of rooting out financial corruption is a Wall Street Insider.

I have to tell you, I just love this stuff!

Since David Miller and the California Association of Professional Scientists brought the matter up, what about CalPERS investments? Well, on September 7, Bloomberg broke the story that CalPERS is in “private” discussions with BlackRock to take over their private equity business, estimated at close to 26 billion bucks.

Wow. This is crazy. Some time ago, I wrote a column called, “Investments Up, Governance Down ... for the Count,” in which I highlighted the shenanigans of General Counsel Matthew Jacobs in hiding an embarrassingly shoddy “review” of CalPERS Private Equity investments. Just as astounding, it is clear that the only real skill of Chief Investment Officer Ted Eliopoulis has is to bamboozle the Board into getting huge personal pay raises even as his track record in private equity sucks.

So even as union-backed candidates Ralph Miller and Michael Bilbrey represent going along to get along -- with more and more layers of secrecy as to how CalPERS manages our $300 billion plus assets -- they try to cast a financial corruption expert (Flaherman) as a Wall Street Insider. Ya gotta wonder.

And while backing Michael Bilbrey, who never voted no on the Board in his life to the staff, they blow off an honest new candidate, Margaret Brown, who has spent most of her professional life working in public finance.  Mayhap someone is worried about having to explain what staff is up to.

BlackRock, for godsake! Why don’t they just lay off Eliopoulis and his staff and simply subcontract directly with Wall Street? The returns might still suck, there would be no transparency or accountability and management fees would rocket, but heck, we’d never know about it until it’s too late to pay for the pensions some 1.5 million Californians depend on. On the other hand, at least there would be a salary savings.

And Oh, By the Way, Is This Election Even Legal?

One of the ways that certain labor organizations (not my friends or any of those unions I have ever worked for, of course) win elections is to rig the process in their favor. Now, enter the CalPERS Board in late 2016, using the Finance and Administration Committee to change the rules of the game in two fundamental ways.

First, they eliminated the secret ballot. You got it, election mavens, under the new rules rubber- stamped by the CalPERS Board, your and my ballots personally identify us in two ways: the bar code on the ballot they use personally identifies us (!) and, we actually have to sign the ballot itself!

Hat tip to Naked Capitalism, who unearthed this in their piece “CalPERS Runs Unconstitutional, Tamper Friendly Election with Non-Secret Ballots.”

The article is a must read, including chapter and verse on exactly how elections worked before the subterranean changes to CalPERS election procedures, as well as exactly what changed. One issue that I found fascinating was their statement that:

“Now CalPERS is not Venezuela, but the agency has a long-standing history of unions using their muscle in campaigns. The reason CalPERS went to an exclusively mail-in voting system in 1994 was due to union abuses. Before, ballots for CalPERS elections would be distributed to government employees at work. Union officials would be on premises that day, telling members how to vote.”    Goodness.

The second change that the Board made, which makes absolutely no sense at all, was to implement online voting. I can’t believe it. Here in LA we recently went through a round of Neighborhood Council elections, and the “new experiment” of online voting proved to be a total disaster with mass confusion, verification nightmares, limitations in actually getting online to vote, you name it. The City had to shut the idea down.

Besides, in the case of the State of California, the Secretary of State’s elections code specifically prohibits online voting. But hey, this is CalPERS. I’m sure that General Counsel Jacobs did his due diligence, issued a written legal opinion to the Board, and told them that it was okey dokey to go ahead with online voting. Sure he did.

Without someone like JJ Jelincic on the CalPERS Board to rat out the rats, we would have no idea about the scummy insider manipulation of the CalPERS election process. My god, Donald Trump and his Attorney General Jeff Sessions would be in heaven if they could get this kind of a system.

As for legality, we all know where General Counsel Matthew Jacobs stands. Probably merrily shredding select documents and manipulating responses to outside public records requests. But, no, that’s not right. He’s too busy outsourcing his job to our Attorney General Xavier Becerra!

That’s right, since he probably engineered the legal advice that got CalPERS sued for millions of dollars in the copyright infringement scandal, he then had the Board run to the state’s lawyer, Xavier Becerra, to handle the predictable and expensive ensuing litigation. And just incidentally, provide some political cover for Jacobs. Really. Just a peach of a lawyer.

The broader question is: where in the heck is Alex Padilla, our Secretary of State, and Xavier Becerra, our California Attorney General, in all this voter manipulation? Nowhere, that’s where. I guess our elected officials in California are great defending the integrity of our voting system when it comes to interference from the Russians or the Trump Administration, but not so much when CalPERS wants to do the dirty.

It should be no surprise that I am renewing my recommendation to vote for Flaherman and Brown because they will expose this kind of underhanded bureaucratic manipulation.

And while I’m at it, let your elected officials know they are asleep at the wheel when it comes to CalPERS elections. Remember, Treasurer John Chiang and Controller Betty Yee are both members of the CalPERS Board by virtue of their public office. That means that they (or their designated representatives) to the CalPERS Board actually voted to implement this train wreck of a voting system.

You might want to contact these officials and ask them exactly how this came to pass, and what they are going to do about it. Just sayin’.