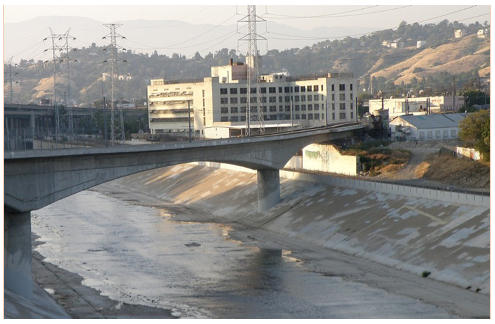 EASTSIDER-As I attended the community meeting/development proposal meeting at the old Goodwill Auditorium in Lincoln Heights, it was clear that Councilmember Gil Cedillo has “learned a thing or two” from his recent, bruising, re-election Campaign for Council District 1.

Part of the anti-Cedillo rhetoric was that he didn’t listen to constituents, and as I recall, that mantra was evident in Lincoln Heights. However, the Lincoln Heights Jail project argues for lesson learned. It has been a model of real planning, due process, and now the beginnings of community outreach – all before any final decisions are made. And boy, does outreach work -- this crowd was somewhere around 195 people, and that’s a lot! Even better, they came to listen, and to be heard by both the wannabe developers, the Advisory Committee, and the Council Office.

All before the Advisory Committee weighs in with their recommendations.

The Lincoln Heights Jail, for those who don’t know, is adjacent to the LA River on 19th Ave, by Humboldt. It was built in 1931, and is the kind of Art Deco style that we saw in Chinatown. The structure and it’s 1949 addition, are right by the big power lines where the Metro link crosses the LA River into downtown. And one street over, on San Fernando Road, you have the old Goodwill Industries building, and the recently repurposed Alta Lofts.

It’s an old, funky area mostly used by commuters as a back way into downtown during rush hour traffic. The Jail itself is a historic landmark (which you can take one of two ways), and as such, is subject to a whole bunch of reports and regulations before it can be qualified for Adaptive Reuse Development. For those interested in the details, you can find the Council File here, and the CAO’s report on all the steps that have to be taken to comply with the Requests for Proposals here.

The short version of the process is that first, the City had to do an Environmental Site Assessment, a Historic Structures Report, and an Adaptive Reuse Report. Then the City issued a Request for Proposals. Nine were received and staff then narrowed the field down to three: CIM Group, W.O.R.K.S. (Women Organizing Resources Knowledge and Services), and Lincoln Property Company.  No website was found for W.O.R.K.S.

Thursday night’s meeting was a joint one -- the Community was invited to join the appointed Community Advisory Community to hear as well as comment on the proposals by the three potential developers. Very cool. And again, before the Advisory Committee submits any recommendations, it was able to hear community input.

The three proposers were given 15 minutes each to give an overview of their proposals and why they should be awarded the contract, with another 10-15 minutes provided for questions by the Community Advisory Committee. Finally, members of the audience were allowed one minute each to make public comment before the meeting ended.

For what it’s worth, here’s my take on the proposers:

1) The CIM Group is a large developer who would fund the project privately (read, no subsidies or public funds). Their proposal was detailed, calling for a 100-room lodge, some 50 live/work lofts, with 90,000 sq. ft. for commercial/retail, and 10,000 sq. ft. for creative office space (read community space). The plan would also include an open amphitheater and urban farm.

The proposal would not require any variances, and CIM would provide a 50% discount on rent for 10 years for the community spaces.

2) W.O.R.K.S (Women Organizing Resources Knowledge and Services), has partnered up with 1B New Ventures, LLC, and with former Councilmember Ed Reyes. As you would guess from their name, they focus on permanent housing for very low-income people, and those with other challenges. Their proposal calls for 47 live/work spaces, and 66 supportive housing units, including 39 for homeless and the balance for seniors.

Their proposal would include a health and wellness center, daycare, and a theater and Roybal Hall.  They envision urban gardening, and are looking to make 80% of the footage open to the public.

This is real development for those who are usually the ones displaced by all the so-called “affordable housing” developers. By definition, it is designed to be built with significant subsidies, such as the recently voted Measure HHH homeless bond money.

3) Lincoln Property, in conjunction with Alcion Ventures and the 15 Group, are fully funding their proposal. Lincoln Properties emphasis was on strengthening connections, such as a (safe) path to the Metro stop in Lincoln Heights, providing bike access, and maximizing the interface between people and the LA River.

They are looking at about 60,000 sq. ft. of residential live/work spaces, retail, mixed income/affordable housing, and community rooms, including a gym in the Jail. Their proposal certainly seemed to be the most innovative of the three, providing a number of ways to periodically close off Avenue 19 for large scale events, and lots of green connecting the LA River to the project.

First of all, good for CD1. When you start looking at the number of Council Files, and the overlapping pieces of the City planning and property management that don’t work well together, pulling all this together was not trivial. My favorite document was the CAO’s “Request to Execute the Extension Options and to Augment the List of Pre-Qualified Consultant Panel of Real Estate and Economic Development Professionals Performing Asset Management and Economic Development Services.” (See Council File 12-1549, if you dare. A glorious monument of obfuscation that only a seasoned bureaucrat could produce.)

This deal is not one of those PLUM Jose Huizar, don’t blink as the project is approved at warp speed, land use travesties. There is real community input along the way, and it will be interesting to see how it plays out in the end. But remember, ultimately the LA City Council gets to make the final decision.

Clearly the most community based proposal is that by W.O.R.K.S. I’m personally familiar with their Teague Terrace at 4260 Eagle Rock Blvd. in Glassell Park.  It was specifically designed to house the formerly homeless, including veterans, and persons with developmental disabilities. At one time, it involved some $10 million in Housing Department Revenue Bonds under the project’s previous name of Eagle Vista.

The good news is that the project is fully occupied, and blends into the surrounding neighborhood.

That project also had a lot of partners, such as LA City, the Mayor’s Office, LA County, the Housing Authority, WORKS, the LA County Dept. of Mental Health, Housing Works, the Eastern Los Angeles Regional Center, and more. Getting all those moving parts in synch takes a significant amount of time. So, I think the question here is how long it would take to fund and build the vision placed forward by W.O.R.K.S.

Whatever the outcome, we were presented with three significantly different concepts of what to do with the Lincoln Heights Jail, and how to make it work with and for the rest of the community. All proposals were worthy, and it should be an interesting journey. I look forward to following it in these columns.

Personally, I would be more comfortable if former Councilmember Ed Reyes were not involved, but that could be sour grapes. I am not a fan of termed out politicians lurking around, and the aftertaste of Reyes’ total control of the City’s planning process through his PLUM Committee is not pleasant.