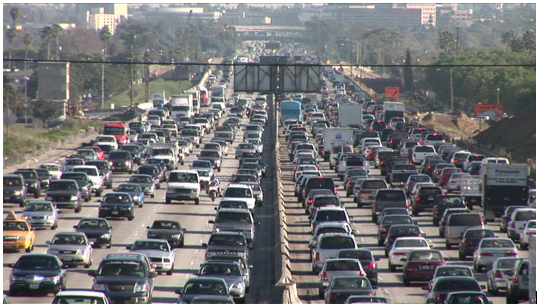 CORRUPTION WATCH-The benefits of living in Los Angeles are god-given, while the liabilities are man-made. There was a time in the first part of the 1900s, when Angelenos more or less tried to preserve the good. Those days are gone.

Transportation and population density have been interdependent variables since 1900. Soon after the first significant downtown was constructed, Angelenos saw that they had made some terrible blunders that threatened the city’s viability. They had allowed a few myopic, greedy developers build a DTLA to satisfy their desire to maximize the amount of square footage within their own projects, be it office buildings or retail stores.

The Folly of Combining Incompatible Modes of Transportation

As a result, commercial trucks delivered their loads to the front of buildings by stopping in the main streets, blocking traffic lanes for hours a day. In addition, many streets had trolleys consuming three vehicle lanes due to their large size. (Trolleys need separate tracts to go both directions.) The combination of large trucks, trolleys and private autos made downtown non-functional. The 1929 Traffic Commission Report recognized a mathematical reality: incompatible modes of transportation should not occupy the same Right of Way (ROW). The City regarded trolleys, passenger autos and trucks as incompatible. Today we have renamed trolleys “light rail transit (LRT).”

As the math showed, certain types of traffic are inherently incompatible and should never occupy the same ROW. Whether you love or hate trolleys or cars, the numbers show that they interfere with each other when they share the same ROW. This includes where the LRT lines cross streets at grade level.

In the early 1900s, the City found “auto trucks” to be incompatible with cars (and obviously with trolleys.) The idea that cars and trucks were incompatible strikes us as odd today. Part of the trouble with trucks was that when they stopped in streets to load and unload cargo, many streets were too narrow to accommodate them. There were two basic solutions to the trouble caused by “auto trucks:” DTLA stores were required to have alleys with loading docks, moving the trucks from the street. The other solution was to widen the streets.

The principle that incompatible modes of transportation should not occupy the same ROW still exists today because mathematics do not change. But today’s problem involves the mixing of bicycles with cars and trucks and, increasingly, with trolleys.

Bicycles Are Incompatible with Cars and Trucks

Bicycles are such a slow means of locomotion that they impede faster vehicles. As a result, bicycles cause increased traffic congestion. The City admits that its policy of adding Bike Lanes to city streets is a part of an anti-car policy. Director of Planning, Vince Bertoni stated in a July 13, 2017 LA Magazine interview:

“…[We want streets that don’t] just revolve around the automobile. We're looking at what it's like to walk, bicycle, even skateboard down these streets and all the other ways we'll get around. We're going to be putting in wider sidewalks, trees, bicycle lanes that people feel protected in.”

This is propaganda claptrap. LA civil engineers going back to 1915 and 1929 knew that streets were for cars and not for other incompatible modes of transportation. The mathematics behind that fact are the same today. It seems, however, that in justifying the incompatibility of Bike Lanes and vehicle traffic, the City is proud that Bike Lanes slow down traffic. But Angelenos are seeing the results of the City’s anti-car policy. Inrix’ 2016 world wide traffic study found “Los Angeles tops the list of the world’s most gridlocked cities, with drivers spending 104 hours in congestion in 2016 during peak time periods….”

The city that tops the worst traffic congestion in the entire world is rapidly instituting a policy to slow down traffic even more by forcing incompatible modes of transportation to share the same street ROW. One would call this insanity if corruptionism were not a more apt explanation.

In 1915, Los Angeles’ civil engineers, as opposed to today’s bought-and-paid-for political hacks, issued the Study of Street Traffic Conditions in the City of Los Angeles. They warned about the danger that corruptionism posed for Los Angeles’ future. They pointed out the folly of allowing a few real estate interests to concentrate development in the Basin or along certain major streets where they had purchased land. Today, we call these special streets Transit Oriented Districts [TODs]; their sole purpose is to concentrate development in a few parcels of land owned by corrupt real estate developers. The LA City Council has oriented all its so-called planning toward making these few real estate speculators as wealthy as possible while everyone else pays the price. The transportation policy is integral to their attempt to confine growth to their own TODs.

The City intentionally crowded Bunker Hill, DTLA, Hollywood, and the Century City-Santa Monica-Westwood triangle with far more office space than the transportation system can handle – or ever will be able to accommodate. As civil engineers proved in 1915, the City needed to allow offices, industry, retail and all other land uses to follow the population as it expanded. The City definitely should not have concentrated offices in the Basin. Yet, that is exactly what happened in order to benefit a few real estate owners. The worse mistake the City of Los Angeles ever made was the CRA’s Bunker Hill project, followed by Century City. Looking at the location of the worst freeway congestion, it is easy to see how densification of office buildings in the Basin is at the core of the problem. People drive from Van Nuys to DTLA and Century City because that’s where the office towers are located.

If the same amount of office space had been spread out around the periphery of the San Fernando Valley in low rise office parks interspersed with residential neighborhoods, we would not have rush hour traffic. Los Angeles’ topping the world’s cities for having the worst traffic congestion is the flip side of a few men making astronomical fortunes from owning huge skyscrapers on Bunker Hill and now in DTLA. The relationship between traffic congestion and developers making billions of dollars is not a mystery – just simple math. A thirty-story building on Bunker Hill is worth more than a two-story building in Granada Hills.

In the 1915 study of Street Traffic conditions, fixed rail mass transit was proven to be a financial and logistical fraud, a nightmare for Los Angeles. The financial fraud came from the fact that the costs were far more than the taxpayer could pay. A subway LRT system, however, would benefit a few land owners. The logistical nightmare derives from the inherent nature of all fixed-rail transit systems.

The financial fraud and the logistical nightmare are interrelated. We have known for well over a century that all fixed-rail lines, including subways and LRT, must have stations within a half mile of where people live and work. People will not use the subway or LRT if they have to walk more than that to get to the station from home or if their destination is more than a half mile from a station. Not only are the costs of constructing a subway LRT system absurdly highly, it is logistically impossible to construct a system that serves an area that encompasses 5,000 square miles.

The underlying financial fraud involves developers’ knowledge that there is too much office space on Bunker Hill and now in DTLA and not enough capacity to accommodate people commuting by car. For thirty years, study after study showed that a smaller and smaller percentage of Angelenos were using mass transit. For the most part, Angelenos hate subways and LRT. When undocumented residents became able to obtain drivers licenses and insurance, subway ridership dramatically dropped. And it now appears that Uber is attracting away the more affluent users of mass transit.

While the real estate developers assumed that people would use subways and LRT, they were wrong. Thus, the city has adopted a strategy to force people to stop using cars. As Director Bertoni admitted, a major thrust in this direction has been to add Bike Lanes to major streets – unfortunately making the world’s worst traffic congestion even more aggravating.

Unless the City can force people to use the subways and LRT lines that go directly to specific office buildings, these complexes will be financial disasters for the owners. This is why LA is pulling out all the stops to make sure city traffic comes to a gridlock so they can drive the population to the mass transit system.

This plan is doomed to failure but greed and satisfying one’s greed blinds men to reality. Assuming we spent a trillion dollars to construct Subway-LRT lines throughout the Valley, what transportation system would we use for the next 20 to 30 years? This ludicrous absurdity defies comprehension. The city’s plan is similar to building a house by putting up the sheet rock first, then adding the studs.

There are Saner Approaches

Los Angeles not only lacks the alternative transportation infrastructure that could enable us to abandon cars, but there are simpler solutions:

(1)  Stop all office construction in The Basin.

(2)  Provide greatly enhanced off-street parking near the main streets in the Basin so that the number of vehicle travel lanes can be increased. The City has intentionally restricted the amount of off-street parking and this has forced people to park on the streets – impeding vehicle flow.

The basic change to halt LA’s decline is to make Quality of Life for Angelenos the prime goal of planning; developer profits should be removed as justification for any planning. Quality of Life should override Developer Profits.