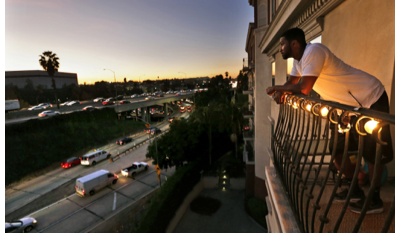 MCDONALD REPORT--After years of alarming studies and in-depth news coverage, the Los Angeles City Council and Mayor Eric Garcetti have yet to address the devastating health impacts to residents who live in freeway-adjacent housing, which LA politicians continue to approve. On Tuesday, at the Planning and Land Use Management Committee meeting, the Coalition to Preserve LA and other community groups urged council members to finally take substantive action.

“Living near multiple freeways, as we do in Pacoima,” said Yvette Lopez-Ledesma, deputy director of Pacoima Beautiful, an environmental justice group in the northeast San Fernando Valley, “is an urban planning death sentence.”

On Tuesday, the Planning and Land Use Management (PLUM) Committee asked the Department of City Planning to provide a report on current city practices to address freeway pollution impacts on nearby communities. As revealed during the meeting, there are no citywide policies in place to protect the public’s health.

Yet the City Council and Mayor Eric Garcetti have known since at least 2007 that freeway-adjacent housing, widely known as “Black Lung Lofts,” seriously endangers the health of children, who are highly vulnerable to life-long respiratory illnesses when living within 500 feet of a freeway. USC’s landmark Children’s Health Study, which was first published in 2004, has proven that beyond a doubt.

In addition, other scientific studies have shown that pregnant women and senior citizens face dangerous health impacts by living next to a freeway.  The LA Weekly, in 2010, and Los Angeles Times, in 2017, have also sounded the public health alarm.

The City Council and Mayor Garcetti, however, have refused to implement important policies such as creating buffer zones so that developers can’t build housing within 500 feet of a freeway or instituting a mandatory notification system in which developers must inform prospective tenants of freeway-adjacent health hazards.

Developers, who’ve long been top political patrons in LA and have outsized influence at City Hall, have contributed at least $6 million in campaign cash to city politicians since 2000.

At the PLUM meeting, Miki Jackson, of the Coalition to Preserve L.A, put the council members on notice.

“Knowing what you know,” she said, “being informed of how dangerous [freeway-adjacent housing] is, and allowing it to go forward could set the city up for some interesting lawsuits.”

East Hollywood activist Doug Haines, whose neighborhood sits along the 101 Freeway, said, “We must prohibit all new construction next to freeways.”

And Chris Chavez, deputy policy director of the Coalition for Clean Air, said his group “urges the City Council to work with the environmental community in developing the [planning department] report… to help ensure that the recommendations in the report are as effective as possible.”

The Coalition to Preserve LA agrees, and insists that residents and community groups are not only allowed to give input about recommendations, but are given a decision-making role in the creation of citywide policies for freeway-adjacent housing.

(Patrick Range McDonald, an award-winning journalist, is the founder of Washtaw.com a … non-partisan news/activism site … and an occasional contributor to CityWatch.)