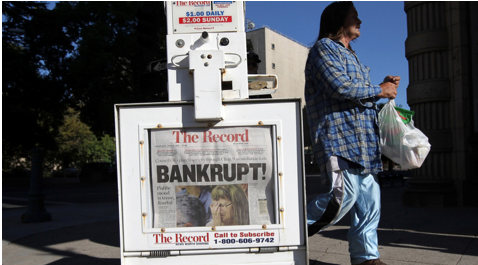 MUSING WITH MIRISCH-It is sometimes both sad and shocking how City Halls throughout the state, along with some of our elected officials, can be in such denial of reality, data and math.

Last week, as has not been uncommon over my years on the Beverly Hills City Council, I have felt like the dude from “The Emperor’s New Clothes;” you know, the guy who points out that the emperor is buck naked, despite the weavers’ admonitions that only unfit, incompetent or stupid people will not be able to see the emperor’s magic suit.

This time the groupthink isn’t about royal finery; it’s about something much closer to home: the ability for city government to be able to continue to provide services for residents, not just now, but also in the future. We have a lot of fiscal challenges (though Beverly Hills is fortunately in better shape than most other cities in the state), but perhaps none as great as a pension system which our city manager once perceptively likened to a “Ponzi scheme.”

It’s all well and good for cities in the name of sustainability to join feel-good groups for equal rights, be against global warming, and in favor of world peace, etc. etc. (For my next turn as mayor, I’m considering founding a group, “Mayors Against Needless Death” which undoubtedly will have a broad basis for much meaningful action.) But if it’s sustainability we’re looking for, then in addition to all the work we do locally to protect the environment, we are terribly remiss if we do not look towards fiscal sustainability, as well.

In my book, fiscal sustainability doesn’t just mean the continued ability to pay for something. We might be able to pay for something, but imprudent use of funds could mean we are neglecting other work or items or services or investments we could be providing or making on behalf of our residents. It is incumbent upon us to try to provide the taxpayers with the highest level of value-for-money, a concept which seems to be alien to most forms of government in the U.S.

In Sweden, where I am a citizen and where I lived for years, we pay a lot of taxes. Sweden is somewhat notorious for high taxes. But guess what? These days, it’s not that much more than in the U.S. And in Sweden, at least you have the feeling that you’re getting a lot more from the government for your money -- health care, child care and stellar public education just being a few things taxes pay for. Here in California, while taxes continue to increase and government continues to treat us residents like ATMs, we are most definitely not getting our money’s worth.

Last week I voted against another memorandum of understanding with one of our bargaining units not because I begrudge any of our employees fair and sustainable salaries and benefits. I voted against the MOU because our pension system in California represents the very definition of unsustainability and we, the City Council, did absolutely nothing towards fixing it. In short, Rome and Sacramento are burning and we are fiddling.

Finger-pointing at Sacramento will only get us so far. Happy talk only does so much. Sure, much of the blame originates with our state legislature which consistently puts public employee unions first, before the very public they are meant to serve. Sacramento is responsible for the mess that is CalPERS, California’s Public Employee Retirement System, which, amid criminal embezzlement and corruption scandals, is run by union representatives with the public’s money. There is something seriously amiss with any public organization that allows special interest groups to play around with billions of dollars of public money with zero risk to the special interest groups, because bad investments will be covered by the taxpayers. Imagine going to Vegas and having the House cover all your losses.

Because CalPERS has successively reduced its discount rate from 8% to 7.5% and now to a still unrealistic 7% (CalPERS’s stellar return on investment last year was .6%,) the rates cities pay towards pension liabilities will continue to skyrocket. Employees won’t pay an additional dime: it’s a Ponzi scheme with a guaranteed payout, funded by the taxpayers.

Clearly, some groups of public employees have themselves become privileged classes, something which was never the intent of public service. Where else can someone retire at the age of 50 with 99% of one’s highest salary for life (and with cost of living increases to boot?) OK, in recent years, tweaks have made slight changes to the formulae for new employees, but private sector employees can only dream of the pension plans even new public sector employees can get because implementing them would bankrupt most private sector employers. Private companies can only raise what they charge for goods or services by so much before people turn elsewhere or dispense with those goods or services. Not so with the government, in which there is seemingly endless creativity in finding new ways to stick it to the residents with new taxes, fees and charges without any corresponding value-for-money.

Amid the hush of the other councilmembers, I asked our CFO about how much these employees were paying towards their own pensions. The answer: 9%, funded entirely by an additional 9% raise we were giving the union in addition to their “regular” raise. I asked what the City was paying per employee towards the employees’ pension costs. The answer: 44.3% of each employee’s salary.  Compare this with what we were paying when I began my tenure on the Council in 2009: 23.2%.  Compare this with what we were paying in 2006: 8.6%.

According to our CFO, the City’s contribution towards employee pensions in 2021, a mere four years from now, will be 69.2% of their salary. So within some 15 years the City’s pension costs will have increased from 8.6% to 69.2% of an employee’s salary.  There is nothing to suggest the City’s share will flatten out at 69.2% or decrease. And those are just the pension costs. It doesn’t include health care or any other of our generous benefits. And it doesn’t take into account the snowballing effect of our unfunded pension liability.

In Sweden, when taxes were at their worst in the 70s, it was actually possible to have a marginal tax rate of more than 100%, something Swedish author Astrid Lindgren referred to as the “Pomperipossa effect.”

In California, we are rapidly approaching a Pension Pomperipossa effect in which the additional cost to the taxpayer of an employee will be more than 100% of the employee’s salary.

It’s all well and good to fault Sacramento for coming up with the idiotic and notorious 3/50 formula, whereby employees could retire at the age of 50 with 99% of their highest salaries for life. It’s an entirely different thing for us not to do our part to protect our cities, our services and future generations’ ability to pay for it. In the words of the incomparable Teddy Roosevelt: “Do what you can, with what you have, where you are.”

In addition to implementing the much maligned and neglected concept of “fairness,” this would also give the public employee unions more incentive to work towards meaningful pension reform at the state level with the goal of creating a system which is also actually sustainable. Solutions to the pension crisis are fairly simple mathematically (switch over benefits for prospective service from defined benefit pensions to 401k-style defined contribution or hybrid pension plans,) but they are nearly impossible politically because of the polluting role of money within our political system and the corresponding political power money gives to public sector unions. Where else do employers get to elect their own bosses?

For all their constant alluding to “Chicken Little,” California public sector unions are more like Bruce Ismay, the chairman of the White Star Line which launched the Titanic. As Ismay famously said in the eponymous film: “But this ship can't sink!” Shipbuilder Thomas Andrews’s response was, of course: “She's made of iron, sir. I assure you, she can... and she will. It is a mathematical certainty.”

To continue with the nautical imagery, our state and City’s pension crisis can be likened to a massive hole in the ship of government. The hole is simply getting bigger and bigger as our unfunded liabilities grow. The best Sacramento seems to offer is occasional tenuous and cosmetic actions which amount to bailing water from the sinking ship a little faster, without any lasting solutions. CalPERS tries to hide the true extent of the damage with accounting tricks such as “smoothing.” But to truly right the ship, we must seek permanent, systemic and sustainable ways to stop the hole from getting bigger.  We must try to plug and fix the hole. Sustainably. If we don’t, to mix transportation metaphors, cities are going to crash and burn (or if you want to stick to the nautical imagery, cities are going to flounder.) It is a mathematical certainty.

As a Teddy Roosevelt Republican, I believe we should be doing everything possible to further the goals of conservation and to protect our environment. But for all our righteous efforts to save trees, it’s finally time for us to recognize that money doesn’t grow on them and that sustainability, like charity, begins at home. Not with finger pointing. Not with Happy Talk. But with real, transformational actions and systemic change.

(John Mirisch is a Beverly Hills City Councilman and Vice-Chair, Los Angeles County City Selection Committee. He is a CityWatch and Huff Post contributor.) Prepped for CityWatch by Linda Abrams.