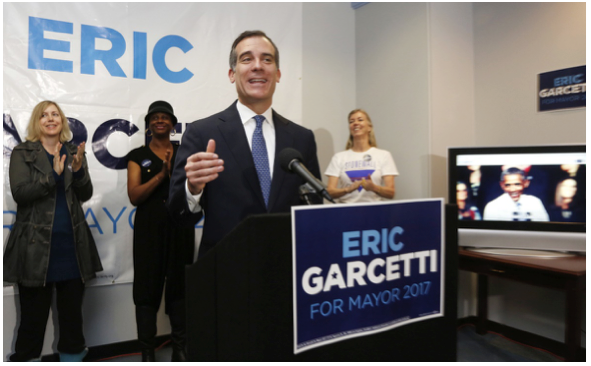 EDITING INFORMATION-Only a fool would accuse the mainstream LA press of dabbling in fake news. But what to call a political endorsement, then, that omits mention of a raging and worsening fiscal crisis caused in large part by the endorsee?

In their endorsements of Mayor Garcetti, every one of the mainstream news outlets, while chastising him for seemingly serious failings, omitted any mention of a fact which was well-known at the time --and in many cases even reported by those outlets on January 9, 2017 -- that since November 2016, the reserve fund has stood at about $295 million, a number the CAO reported was “only precariously above” the minimum amount required under city policy -- 5% of the General Fund budget. They also neglected to report that the LA City Council had just been forced to change the law in order to borrow up to $70 million through judgement obligation bonds, a form of borrowing not used since 2010.

Why does this matter? Why omit a fact that readers would no doubt consider important in choosing how to vote, or just as important, in choosing whether to vote?

Maybe readers wouldn’t have changed their vote. And it’s unlikely that the outcome would have been changed. But discussion of the issue might have produced pressure to expand coverage of the race, and in any case would have given the public a chance to ask tougher questions of the Mayor -- to make him earn his reelection – and to commit to meaningful reforms. Maybe even hold his feet to the fire.

By offering seemingly “tough” criticisms of the Mayor yet excluding genuinely tough topics, the media misrepresents "by omission" and so denies readers their right to think for themselves.

The motive for engaging in such whitewashing? You’ll have to ask the press outlets. Incumbents often set up “velvet rope” systems whereby reporters who criticize them too harshly are denied access. This can hurt business, and so they avoid stories that are too hard-hitting, especially in an election where the outcome seems certain. Why stick out their necks by reporting things unfavorable to the incumbent when they know it will be he who has the power after the election?

The problem with this attitude is that it misleads the audience, and we believe it hurts the bottom line. Readers want hard-hitting truth. And incumbents respect organizations that don’t kowtow because they think they have to. The best way to deal with the velvet rope is to blow right past it.