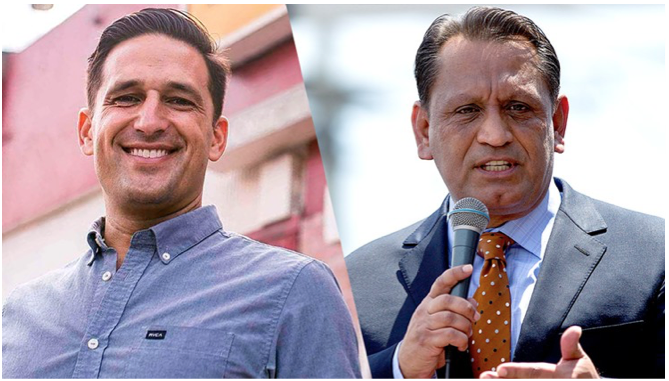 RUN-OFF?-Last week, I had a brief sit down with Joe Bray-Ali – the upstart, independent candidate for the City Council seat in Council District 1. As of this writing, Bray-Ali looks poised to head into a runoff with Gil Cedillo. It would be hard to create a more polished, poised, committed, and competent candidate than Bray-Ali. If Mr. Smith rode his bike to Washington, he’d look and sound a lot like Joe Bray-Ali. (Photo above: Joe Bray-Ali on left, Gil Cedillo.)

Contrasted with the mumbly, creepy-uncle vibe of Cedillo, it’s hard to believe we even need a runoff. But this is LA, where voter turnout inching above 18% is considered pretty darn good, and the population completely tunes out local politics until it spills into their backyard. In a city full of faux-progressives screaming at their iPhones over the latest outrage in Washington, Los Angeles had a collective yawn on Election Day and sent a crop of bought-and-paid-for incumbents back to City Hall to kick business as usual into overdrive.

I can’t say I’ve been paying much attention to CD1 – most of my time is spent in my own neighborhood. But I’ve known Joe for a while, seen him in action in the community, and know he’s paid his dues. We disagreed over Measure S, but – as I’ve said all along – we don’t need Measure S if we have elected officials committed to doing what’s right in our neighborhoods rather than the bidding of bankers and developers. Joe Bray-Ali is that kind of guy.

But even a surface understanding of the race in CD1 leads overwhelmingly to the conclusion that the time has come to elect a true independent to City Council.

Word on the street is that Cedillo can’t really be bothered to get to know his true constituents. Even his supporters note his "somewhat aloof governing style."  If you want the opposite of aloof, vote for Joe Bray-Ali. He’s literally on the streets of his neighborhood every day, riding his bike, working for his neighbors, and talking to people. You don’t need to be a VIP to talk to Joe. Just look for him in the neighborhood.

But the most important reason to vote for Joe is because he’s not beholden to the big money interests who look at our neighborhoods the way Donald Trump looks at a cheap steak. Cedillo – like every one of the incumbents on his (and I do mean “his”) way back to the halls of power – is in deep with the money men, including local do-gooders Chevron Corporation.

During our conversation last week, Joe made an interesting point. He said, although he could compete with the incumbent on a 19th Century playing field – shaking hands, going door-to-door, meeting people in the neighborhood – as well as on a variety of 21st Century platforms – Internet, social media – the 20th Century was killing him. Big media – newspapers, radio, television – where blood and money are the only things that break through the gate, and old-fashioned mailers – where name recognition is forged in the minds of many low-information voters – all came down to one element: money. In order to break through the strangle-hold that money and apathy have on City Hall, we’ve got to find a way to get up off the couch and vote.

It can’t be that hard.