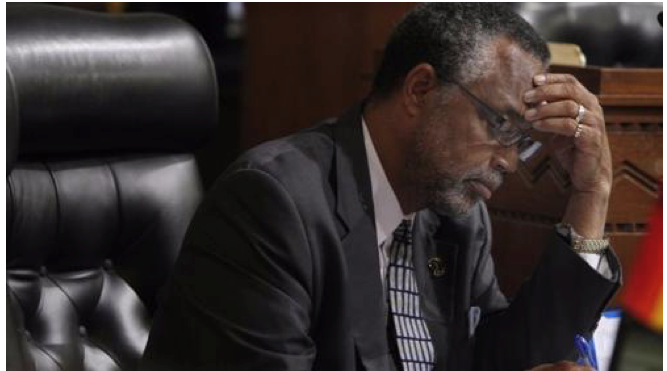 @THE GUSS REPORT-On Friday, March 3, Dakota Smith, writing for the LA Times, referenced my article in CityWatch in her report on the bigamy allegation swirling around District 9 City Councilmember Curren Price.

Smith noted that Price, whose opponent Jorge Nuño was endorsed by the LA Times for the city’s March 7 Primary Election, was scrambling to prove that he is actually divorced from his first wife, Lynn, stating:

“Price and his legal team are trying to locate records that would prove the divorce was finalized.”

Since Smith had access to the entire divorce file and could see that no such document exists in it -- and Price has refused to tell Smith whether he filed for divorce elsewhere -- she shouldn’t hold her breath waiting for those “missing” records to surface from Price’s people.

“Mr. Price has been operating on the belief that his divorce is full and final,” said his campaign spokesman, Josh Pulliam. “Based on the questions raised in the past few days, he immediately requested all of the files and records regarding the divorce so we can get this resolved.”

Did Smith ask Pulliam how can that be, since records show that Price and wife #1 did not split real estate they co-owned and never resolved other financial or spousal support issues?

Does Smith blindly accept that Price (who has a law degree, but not a license to practice) and his divorce attorney both forgot to address this since the case’s last hearing in 2012?

Last week, I challenged Mr. Pulliam on his assertion that Price immediately asked for his divorce file upon hearing of the bigamy allegation. In fact, it was way back in a January 20 email exchange that I first asked Price’s City Hall media relations person, Angelina Valencia, in what state, county and year did Price divorce his first wife? She never provided a date. Pulliam replied, “that’s news to me.”

An impromptu face-to-face I had with Price before the February 3 LA City Council meeting in Van Nuys went as follows:

DG: Can you please tell me in what state, county and year you divorced your first wife, Lynn?

Price: Why do you want to know that?

DG: Because it’s an interesting question.

Price: Why do you think it’s an interesting question?

DG: Because the court shows that your divorce was never finalized, and that you are, and have for a long time, been married to two women.

Price turned and walked away without saying another word.

These two exchanges were one and two months ago.

I also repeatedly raised the subject in public comments at several City Council meetings. Price, Pulliam told Smith, only asked for his divorce records from his attorney just the other day…after the first of my two earlier articles on the subject. Price sat on the subject for months; he did not take immediate action to find out what is going on. Is that because he already knew?

“Curren Price is divorced, end of story,” Robles said in a statement. “I was Curren Price’s attorney; my office filed the paperwork. As far as Curren Price is concerned, his divorce was settled years ago and that’s what was communicated to Mr. Price at the time.”

This is the exact quote Robles gave the LA Sentinel a few days after my first article was published. Smith also failed to write about whether Price perjured his Los Angeles Ethics Commission financial disclosure forms. Had she examined Price’s ethics forms, she could have asked him why he listed no spousal assets from either wife on his 2012 form, or why Price failed to list wife #1’s financial assets in any subsequent year’s disclosure forms since he had to have known – according to his own legal activity – that he was still married to her.

More glaringly, Smith did not mention that in Price’s divorce file in 2012, he, his attorney Albert Robles, and their process server swore (on a misdated document) that they unsuccessfully tried to serve divorce papers on Lynn Price, wife #1, at 4519 Don Arturo Place in Los Angeles.

Astonishingly, that is an address that Price’s wife #2, Del Richardson, has owned since 2001, according to real estate records and Price’s City Ethics forms, which says that the income from that house came from “Dr. and Mr. Earl Jones.”

How does that math work? Pardon the pun, but that is Price-less.

(Daniel Guss, MBA, is an Active Member of the Los Angeles Press Club, and has contributed to CityWatch, KFI AM-640, Huffington Post, Los Angeles Times, Los Angeles Daily News, Los Angeles Magazine, Movieline Magazine, Emmy Magazine, Los Angeles Business Journal and elsewhere. Follow him on Twitter @TheGussReport. His opinions are his own and do not necessarily reflect the views of CityWatch.) Edited for CityWatch by Linda Abrams.