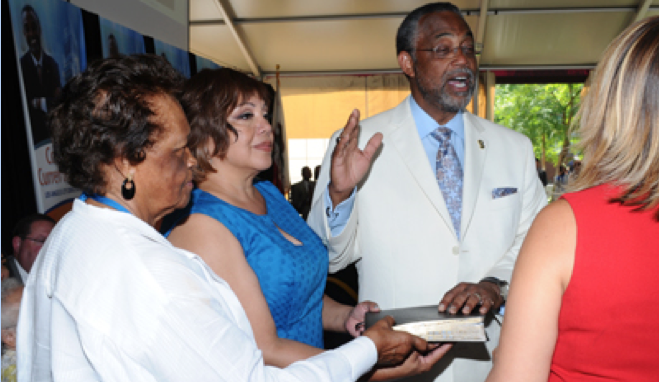 @THE GUSS REPORT-An article I wrote last year cautioned that when speaking with politicians, and those surrounding them, one should “listen closely, because what they say matters; their evasion matters more; and their evasion while speaking matters most.”

Today’s column starts innocently at a community meeting in Hollywood a few weeks ago when a woman named Del Richardson offered money to the residents of 12 rent-stabilized addresses on Yucca Avenue and Vista del Mar Avenue to persuade them to move elsewhere so developers could use their landlord’s property for more lucrative purposes. (Photo above: Del Richardson, blue dress; Councilman Price, white jacket.)

What Richardson and her company, Del Richardson Associates (DRA), were in the habit of not offering is this tidbit of information: according to media sources, she is married to Curren DeMille Price, Jr., the Los Angeles City Councilmember who happens to be on the city’s Planning and Land Use Management (PLUM) Committee. (DRA which has been in business for decades does not appear to have a website, or at least not one that is currently functioning.)

When the locals confronted Richardson (who is listed as “Del Richardson Price” on the Councilmember’s Wikipedia page and elsewhere) about that relationship, and whether she was offering fair market money to vacate their units, she begrudgingly admitted that she is married to Price but claimed that she had no conflict of interest. Still, it is believed that she left or was removed from the project days after the disclosure.

In order to determine how long Price and Richardson have been married, a search of public records shows that Price was, indeed, married…to Lynn Suzette Price, his first wife, and that he twice filed for divorce from her in the Los Angeles court system, with neither effort finalized. Mr. Price’s second such effort to obtain that divorce tells a curious story, to say the least.

In 2012, Mr. Price tried to persuade the LA court to grant him a divorce hearing because, he claimed, he was unable to locate Lynn, and he wanted to serve notice on her via a paid announcement in a newspaper. But the court staff directed Mr. Price to ascertain from the post office whether Lynn used a change of address form, and to explore serving her at that address, if one was provided.

The case file shows no further activity in that divorce pursuit…because Mr. Price knew quite well where Lynn was living and working.

Lynn Price is an attorney practicing in Trenton, New Jersey. It says so on her website, and in various bar associations to which she has belonged since 2003, after receiving her law degree from Southwestern University. Her physical address, an active phone number and email address are all readily available.

Price knew all along where to serve his wife with divorce papers – had he wanted to.

No one can know why the process server or Mr. Price misled the court in declaring under penalty of perjury that Lynn could not be located, though his not wanting to split assets with his first wife that he currently co-owns with his second wife is a prevailing thought. Mr. Price is no amateur when it comes to serving legal papers. According to his biography, he earned a law degree from the University of Santa Clara. But according to the California Bar Association, he never received a license to practice law in California.

In addition to there being no record of a divorce between Mr. Price and his first wife in Los Angeles courts, court clerks in Sacramento, Houston, Trenton and Washington, D.C. (i.e. places where either or both were known to have lived prior to Price marrying Richardson) indicate there is no such divorce record in those locations either.

That’s when the LA Times endorsed Jorge Nuño, Price’s young Latino challenger for his CD9 seat on the LA City Council, a community which is quickly transitioning from largely African-American to predominantly Latino.

Within minutes of my publicly pointing out Nuño’s rise, I received coordinated emails – within minutes of each other – from Del Richardson and Price’s media relations person, Angelina Valencia.

Richardson declared, “I conduct all my business with honesty and integrity in a fair, ethical and forthright manner, and in compliance with laws and regulations.”

But this 2004 LAUSD audit concluded that Richardson’s firm overbilled the school district by $83,128 for unauthorized charges. The audit recommended that the amount should be recovered from DRA, or deducted from its future invoices. It is unclear whether Richardson’s excess fees were ever repaid, or if any of her other government contracts are under audit.

Moreover, while Richardson stated that there was “public disclosure of my business interests in the Councilmember’s ‘Form 700,’ economic interest statement,” there was no such mention of it in Price’s 2012 Ethics Commission Form 700, when he was a candidate for LA City Council. He only made that disclosure in subsequent years, when he already had the job.

The huge financial increase between Mr. Price’s 2012 and 2013 economic interest disclosures are the likeliest reason why he wanted a divorce from his first wife without serving her directly.

So if the LAUSD could not rely on Richardson’s financial figures, it comes as no surprise that the residents of rent-stabilized apartments were no less concerned that she dealt fairly with them, either.

And finally, there were the emails from Angelina Valencia, Mr. Price’s Communications Director, who, when asked when and where Price divorced his first wife, wrote back, “I am currently running your request by the City Attorney's Office. I will have a response for you shortly.”

Why would the City Attorney’s office have knowledge of, let alone anything to say about, when, where – and whether – Mr. Price divorced his first wife? Ms. Valencia has yet to reply.

(Daniel Guss, MBA, is a contributor to CityWatch, KFI AM-640, Huffington Post and elsewhere. Follow him on Twitter @TheGussReport. His opinions are his own and do not necessarily reflect the views of CityWatch.) Edited for CityWatch by Linda Abrams.