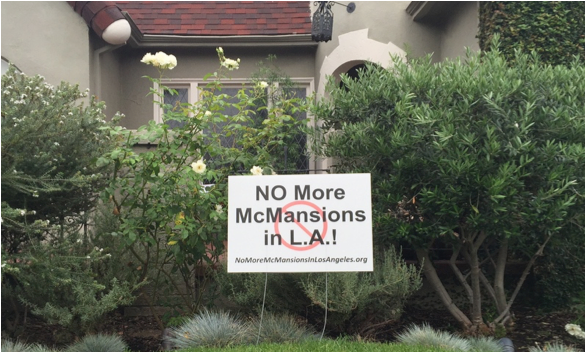 THE CITY--Nearly three years after Councilmember Paul Koretz sponsored a Motion to reform the city’s fatally-flawed citywide mansionization ordinances, the City Council has voted to adopt amendments that go a long way to cutting McMansions down to size.

Despite the passage of the Baseline Mansionization Ordinance (BMO) and Baseline Hillside Ordinance (BHO) in 2008 and 2011 respectively, out-of-scale homes have proliferated in Los Angeles, and the problem has worsened steadily over the last decade.

Mansionization is a citywide problem, and not just because it violates the scale and character of neighborhoods across the city. It also impacts affordable housing citywide. When McMansions replace modest homes, folks get priced out, and the spillover demand drives up prices in less expensive neighborhoods. And so on down the line. It’s like squeezing a balloon.

The amendments passed on Wednesday make major improvements. The basic tool for setting size limits for any structure – residential or commercial – is the ratio of building size to lot size. The ratios vary according to the size and type of lot – urban, suburban, rural, etc.

Small city lots – the so-called R-1 zones that make up about 70 percent of single-family properties in Los Angeles -- have been hardest hit. On these properties, the old ordinance would allow a ratio well above 70 percent, when you factor in bonuses and exemptions. As folks in those neighborhoods can tell you, a 4,350 square foot house on a 6,000 square foot lot deprives its nearest neighbors of air, light, and privacy and blows up the character of the neighborhood.   With a far more sensible ratio and the elimination of bonuses, the limit on that same R-1 lot is now closer to 3,000 square feet – enough for a spacious, modern home that plays nicely with others.

In every category, the amendments reduce the ratios from ridiculous to reasonable. They do away with most bonuses and exemptions, increase setbacks, and curtail grading and hauling allowances in hillside areas. Regrettably, the ordinances still exempt up to 200 square feet of front-facing attached garages from floor space and fall short of a really rigorous standard and transparent process for granting variances to institutions located in residential neighborhoods.

Though imperfect, these ordinances set a firm foundation for a selection of “variation zones” that will allow neighborhoods to tailor regulations to their individual scale and character.   And they provide benefits far beyond the specific neighborhoods where they apply. This kind of meaningful reform sets a strong precedent for many issues that follow, including limiting development in multi-family zones and coming to terms with “small-lot development.”

Success is said to have many fathers. In this case, the Big Daddy is unquestionably Councilmember Paul Koretz. He put the mansionization issue on the table, kept a firm grip on it for almost three years, and engineered a crucial course correction just last December. Councilmember Ryu has also been steadfast in his support, and Council President Wesson stepped up exactly when we needed him most. Through a long, tough slog, city planners kept their wits about them, and hundreds of Angelenos spoke up to promote livable, sustainable neighborhoods.

Mayor Garcetti is expected to sign the measure promptly, and it should take effect some time before March 24. If you’re keeping track, Wednesday, March 1 was a good day in the City of Angels.

(Shelley Wagers is a homeowner, community activist, an expert on Los Angeles’ mansionization crisis and an occasional contributor to CityWatch.