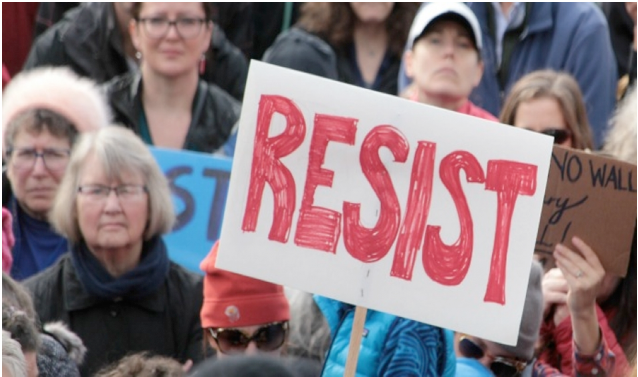 GELFAND’S WORLD--The local chapter of Indivisible met last week. As you may recall, this is the grass roots reaction to the Trump administration and the new congress. Apparently, the San Pedro locals started with a few people getting together in a living room just a week or two ago. They decided to go public immediately rather than wait around. The time and place of the meeting was spread largely by word of mouth, which is how I found out about it. But suddenly, there we were, a standing room only session running into the better part of sixty or seventy people. At the meeting, word spread that there are now nearly 6000 such groups spread around the country.

The big question on people's minds is simple. The group is developing in numbers and organization, so what should people do now? There obviously are hundreds of thousands of activists who are flocking to these meetings, and probably millions more who are beginners at activism but nevertheless strongly motivated and energized. How to put this to effective use?

The guideline proposed by the originators is to form local groups which are dedicated to opposing what the Trump administration and congress are trying to do. You might say it's a liberal version of Just Say No. This presumably starts with preserving the Affordable Care Act and defending civil rights. As the program of the congressional right wingers starts to coalesce in the form of legislation, there will be other things to oppose.

The guide book for Indivisible explains that the Tea Party conservatives self-organized and descended en masse on congressional town hall meetings. Such meetings used to be fairly calm -- what will the government do about farm price supports and the like -- but suddenly the congressmen were getting an earful. And it was loud, and often enough, not very civil. The Indivisible guidebook does not propose that people be uncivil, but it does suggest that they show up and make their feelings known.

As Woody Allen pointed out, eighty percent of life is showing up, and that is what has been happening. We are starting to hear of an increasing number of confrontations between worried citizens and the congressmen who nominally represent their interests. A bunch of conservative Republicans are suddenly on the other side of the Tea Party approach. A lot of the discussion, some of it heated, has been about threats to abolish the Affordable Care Act.

The reason we know this approach has been effective is that the right wing noise machine has been complaining about the behavior of the protesters. When you think back on the Tea Party era, the irony is rich. Those conservatives sure know how to dish it out, but take it? Not so much.

Breitbart news is even referring to Indivisible as "Soros-linked." This, you have to realize, is actually kind of funny. The right wing used to complain about inferred ties to the Russian government. This no longer being an option, they try to tie their opponents to George Soros. It must be some kind of trigger word for their loyal readers.

I would like to offer a couple of suggestions regarding where things go from here. 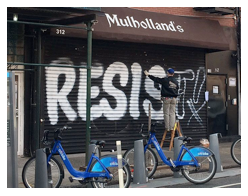 First, it is obviously important that Indivisible grows in number. It's standard to compare organizational strength to the National Rifle Association. They should make it a goal to grow to at least that size. But it's also important that the resistance to Trump's policies continue to grow outside of the big cities on the two coasts. Therefore, people who are willing to join the opposition should reach out to people who live in political border areas, the places that the news media traditionally refers to as purple (for their near balance of liberals and conservatives). Whether it's relatives or old classmates, online chums or army buddies, it's important for participants to make the effort to bring in at least one or two new people.

It's also important for the movement as a whole to provide psychological support, as it were, to the hardy folks willing to stick their necks out in the redder areas. It shouldn't be any great surprise that you can't peel people off of one interest group if you don't show them some alternative.

One measure that seems to be drawing some blood from the congressional Republicans is the telling of truly emotional stories by those who have found improved health and better medical coverage due to the Affordable Care Act. The collection and spreading of such stories is an important message in and of itself, but also adds to the political strength of the movement.

The need to preserve Medicare is another story that should be spread far and wide. You would think that there wouldn't be any need, what with Medicare traditionally being considered a third rail in American politics along with Social Security. But congressional Republicans have already broadcast their intent to do damage to both of these programs. It's time for Indivisible participants to shout out the danger.

Back in 1964, John A. Stormer published his book None Dare Call it Treason, a favorite of the right wing during the peak years of the Cold War. In recent weeks, the title has been played on by critics of Trump's connections (whatever they may be, exactly) to the Russian government and Russian business interests. Marty Kaplan wrote a piece for the Jewish Journal that is reprinted on the Bill Moyers website and contains the following (not entirely tongue in cheek) paragraphs:

"Now that the CIA has determined that the Russians intervened in the presidential election to help Trump win, the Cold War politics of left and right have been flipped. If Stormer rewrote his book for 2016, its thesis might go like this:

"Beware of Donald Trump. Witlessly or willfully, he’s doing the Kremlin’s bidding. Anyone who enables him — on his payroll or in the press, by sucking up or by silence, out of good will or cowardice — is Vladimir Putin’s useful idiot. This is a national emergency, and treating it like normal is criminally negligent of our duty to American democracy.

"Trump as traitor: I can just imagine the reaction from the Tower penthouse. Lying media. Paranoid hyperbole. Partisan libel. Sour grapes. A pathetic bid for clicks. A desperate assault on the will of the people. Sad! (Note to the tweeter-in-chief: You’re welcome.)"

Trump and his close associates as traitors -- indeed, that's how the right wing would have referred to Democrats who dared to get as close to the Kremlin in an earlier era.

These are legitimate concerns, but may I suggest that an equally strong concern, not only for Indivisible but for all Americans, is Trump's lethargy over national security issues. It's not that he communicates a lack of interest in the subject, but that he isn't willing to do the necessary work. In those meetings with our congressional representatives, we might also point out that political meddling is preventing the U.S. from having a capable National Security Advisor who is allowed to appoint and administer a capable staff. At least, that was the case as of yesterday. Maybe the official policy (if not the actual practice) will change tomorrow.

We might remember that George W. Bush, when told in his security briefing about Bin Laden's intentions, famously replied, "All right, you've covered your ass now." Trump got a lot of criticism for failing to attend several security briefings during the period between the election and his inauguration. His unwillingness (or inability) to put the necessary mental effort into receiving a full briefing has become known. It's worth worrying about, and it's worth complaining about to your congressional representative.