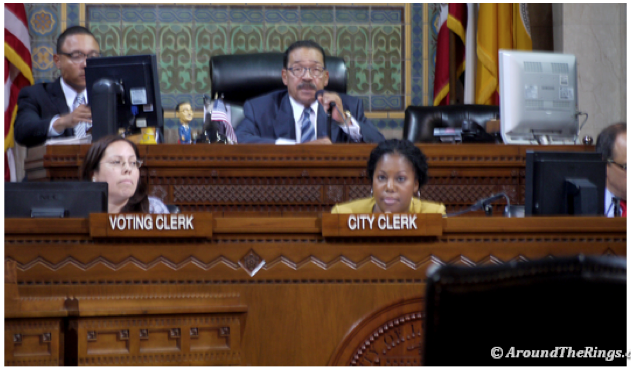 ALPERN AT LARGE--I really feel for those Angelenos getting pummeled between the pro- and anti-Measure S arguments and literature.  Why wouldn't they be confused...especially with the distractions occurring at the federal and state levels of government.  But the question of why Measure S comes down to this:  Does the citizenry of the City of Los Angeles trust the City Council and Downtown government to support the interests of law abiding, taxpaying Angelenos?

While acknowledging that there are a few good local pols, overall the answer must be a resounding NO!

Our current Mayor, Mayor Eric Garcetti, who is a certain improvement over his predecessor but has overseen megadevelopment that have been ruled as illegal in court, opposes Measure S.

Those supporting Measure S?  The volunteers.  The environmentalists.  The affordable housing advocates.  The neighborhood preservation advocates who have ALWAYS compromised and encouraged good development for more housing when sustainable and affordable.

Those opposing Measure S?  Two groups:  the "true believers" that believe that megadevelopment and a "Blade Runner" scenario of a sterile, overcrowded Los Angeles is WONDERFUL, and those who are primarily opposed to Measure S because they're being PAID (Primarily Associated In Development) to fight it.

After all, nothing says being pro-megadevelopment (and not just pro-REASONABLE development) than Herb Wesson and his band of "Trumplestilskins" on the City Council who are awash in developer money and are much more beholden to their corporate sponsors than the voters they purport to represent.

And why NOW are the City Councilmembers rushing to update Community Plans, "ban" or "limit" corporate money for City political races? Why are they NOW talking a better Planning Environmental Review process?

Well, after decades of citizens and Neighborhood Councils screaming for a legal, rule-abiding City of Los Angeles, Measure S came up.

So Let's Make Something Clear:

1) THIS City Council and Mayor have never truly respected the citizenry and Neighborhood Councils.  A few stand out as listeners and honest brokers, but overall they and the Planning Politburo they've created don't give a DAMN about the citizenry.  We're NIMBY.  We're unenlightened.  We're uneducated.  We're just too darned "mean" to "get it".

2) THIS City Council and Mayor, and those before them, are continuing a process of undermining the Neighborhood Councils Mayor Riordan rammed through 15-20 years ago just like they've done for LADWP reform and for budget reform.  Lip service, but when push comes to shove it's always on "their terms", with a tweak or two to ensure things stay the same, and that real reform just doesn't get implemented.

3) THIS City Council and Mayor don't want Planning and related reform.  They want the continued "pay to play" with enough money greased over enough palms to get elected and re-elected, and with a few social issue distractions to make those of us still not too cynical to vote willing to keep them in office.

To reiterate and summarize, as stated in my last CityWatch article, and with the understanding that I am NOT being PAID:

1) If Measure S passes, housing and construction will go on aplenty...just not the illegal megadevelopments.

3) If Measure S passes, there will be plenty of apartments and opportunities to upgrade our commercial corridors to create wonderful new places for people to call "home".

4) If Measure S passes, high-density housing and development that is transit-oriented will certainly be welcomed next to train stations...but car-oriented megadevelopments will not be.

5) If Measure S passes, the opportunity for low-rise development to house the middle class can be the new focus of construction throughout the City of the Angels (even for that region south of the I-10 freeway) that prevents gentrification and empowers the middle class.

And also remember: those supporting Measure S are those who've overseen and led us into the problems we now face with inappropriate development, and either have ...

… a conflict of interest and are getting PAID, or

… just don't give a damn about the worsening lives of tired, exhausted, and increasingly-disillusioned volunteer Angelenos who just simply want to save their City.

(Kenneth S. Alpern, M.D. is a dermatologist who has served in clinics in Los Angeles, Orange, and Riverside Counties.  He is also a Westside Village Zone Director and Board member of the Mar Vista Community Council (MVCC), previously co-chaired its Planning and Outreach Committees, and currently is Co-Chair of its MVCC Transportation/Infrastructure Committee. He is co-chair of the CD11Transportation Advisory Committee and chairs the nonprofit Transit Coalition, and can be reached at [email protected]. He also co-chairs the grassroots Friends of the Green Line at www.fogl.us. The views expressed in this article are solely those of Dr. Alpern.)