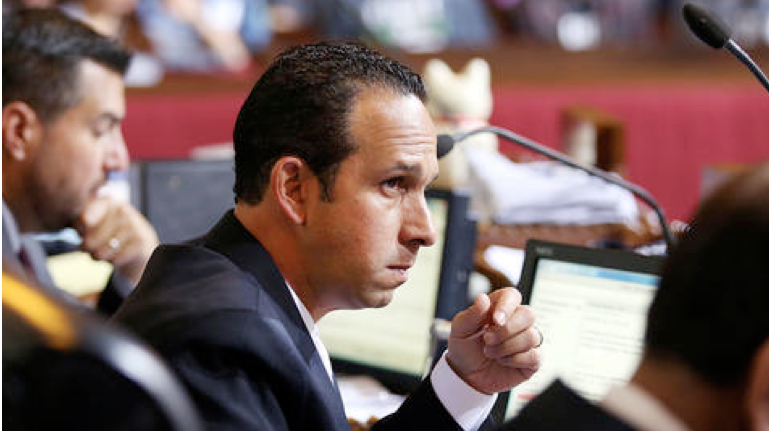 @THE GUSS REPORT-You know that the City of Los Angeles is in trouble when Councilmember “Grand Jury Nury” Martinez seems like a less risky choice than her colleague Mitch Englander (photo above) to serve as City Council president pro-tem when council president Herb Wesson is not running the meetings.

Englander, running Friday’s City Council meeting in Wesson’s absence, came this close to putting the city (i.e. the taxpayers) in significant legal jeopardy when he threatened Armando Herman, an all-star button-pushing gadfly, with suspension from future Council meetings as he was being ejected from his second consecutive meeting for violating random, inconsistently enforced and historically illegal decorum rules.

That is precisely what caused the city to be on the losing side of a very costly federal 1st Amendment lawsuit a few years back when it was brought by 2017 mayoral candidate David “Zuma Dogg” Saltsburg, who wrote the book on successfully exposing local politicians at public meetings, often with colorful rap lyrics.

California’s Ralph M. Brown Act, passed in 1953, gives great leeway to members of the public to express their beliefs – especially their derision of elected officials – at public meetings. The biggest known settlement the city had to pay for abusing a member of the public exercising that right was the $215,000 it paid in 2014 to Michael Hunt, a black man dressed in a KKK outfit – this was for kicking him out of a 2011 meeting because his outfit was deemed disruptive to the meeting and he refused to take it off.

Englander, who held various staff positions, including Chief of Staff, in the office of his predecessors Councilmembers Hal Bernson and Greig Smith, during those lawsuits, tangled with virtually every public speaker on Friday, refusing to give them their due leeway to make their points. Englander had his omnipresent chip on his shoulder from the get-go.

At the 1 hour and 20 minute mark of the video, Englander threatens Herman – who was in his characteristic obnoxious-but-legal mode, “….we are going to ban you for…for a number of meetings, for disrupting the meeting.”

Englander’s mic was immediately cut, as he turned to consult with the new Deputy City Attorney who advised Englander that he could not make such threats.

Read Englander’s lips while his mic was silenced. The next thing he says to the Deputy City Attorney is unclear, but in the sentence after that, Englander clearly says, “we can’t?”

When Dion O’Connell, the previous Deputy City Attorney in charge of enforcing rules at City Council meetings, was recently given a public send-off before going on to his next job, he said that his biggest regret during his lengthy tenure was his failure to protect the city from the Zuma Dogg lawsuit, in which there was a nominal verdict, but massive legal fees to pay.

With Englander still not understanding the legal and financial risks of his own misconduct, it is time for Wesson to step in, protect the city from liability and remove Englander from occasionally running the meetings altogether.

The reason for Englander’s misconduct might be similar to that of Martinez, who is female, and Wesson; they are the three most diminutive of the city’s 15 lawmakers, and they each adopt a bullying – and costly – mentality when they take the several steps to ascend to the Council President’s elevated podium.

But things are different with Englander, who at about 5’3”, perpetually tries to project a macho facade.

In his 2016 run for LA County Supervisor, Englander raised the most money of any primary candidate, but came in 5th place out of a field of 6 (of those who got at least 10% of the votes) in part because a judge publicly shot down his effort to list his profession on the ballot as “police officer,” a macho authority figure, when Englander is simply a part-time reserve officer.

In 2014, Englander was dismissive of a sexual harassment lawsuit filed by a staffer against him and his chief of staff, John Lee, which a city panel unanimously agreed to settle.

And even with dog licenses, Englander did not pay them for his own purebred Golden Retrievers for years, despite having a high kill shelter located in his own district where he could pay them, until I made a public records act request for those records. Englander still hasn’t paid the late fees for those dog licenses.

Should City Attorney Mike Feuer be forced to defend LA against another free speech lawsuit, his lawyers won’t be able to tell a jury that the city didn’t know about these problems, especially if it is triggered by Englander’s misconduct: the running joke at City Council being Englander’s nickname “The Bad Mitch,” which is used to differentiate him from his colleague, Mitch “The Good Mitch” O’Farrell.

You can read more about the Ralph M. Brown Act here.

(Daniel Guss, MBA, is a contributor to CityWatch, Huffington Post, KFI AM-640 and elsewhere. Follow him on Twitter @TheGussReport. His opinions are his own and do not necessarily reflect the views of CityWatch.) Edited for CityWatch by Linda Abrams.