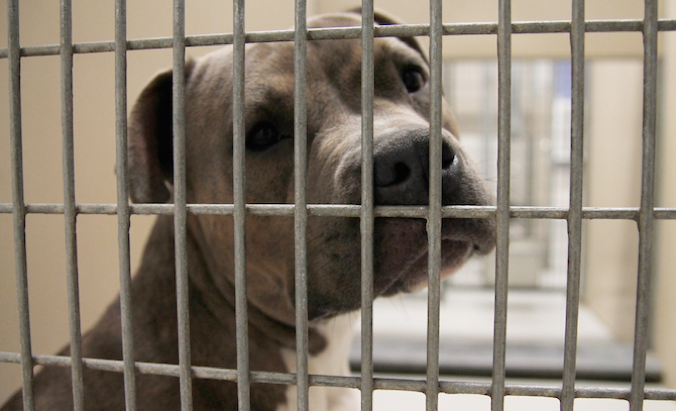 ANIMAL WATCH-Priscilla Romero, Animal Care Technician for LA Animal Services, who was viciously mauled by a Pit Bull on January 14, is healing but the road to physical and emotional recovery will be long and painful, as she realistically acknowledges. She said she can't begin to estimate the future trauma this incident will have on her because she has never been seriously injured before.

Many things in Priscilla's life changed the instant Cielo, a gray-and-white female Pit Bull, lunged at her without warning, ripping the flesh on both her arms, tearing and tossing huge chunks of muscle from her left arm onto the floor of the kennel. She may never be able to return to work with shelter animals, a job she has loved for ten years. And it cannot yet be predicted what permanent physical restrictions will result.

What will not change for Priscilla is the devotion and support of her coworkers at all LA animal shelters, and especially those at North Central, many of whom were involved in saving her life.

So, where does management of LA Animal Services and other City officials stand regarding this tragic event -- other than to remain notably silent? General Manager Brenda Barnette admitted to the Board of Animal Services Commissioners at their January 24 meeting that she had neither visited nor talked with Priscilla, leaving that to the kennel supervisor.

There was little concern shown by the five Commissioners who legally head the Department as they continued their "no-kill" pursuit in the name of the Mayor. President David Zaft asked a few generic questions about the incident and alluded to the determination of where responsibility could be placed. Barnette did not announce any investigation of facts.

She casually discussed providing refresher training for Animal Care Technicians -- rather than addressing the shelter's faulty equipment which failed to keep the dog separated; the absence of a "distress" button to signal an emergency; and the lack of available safety devices throughout the shelter. She also avoided mentioning any causal factors from the practice of keeping dogs that have bitten and are unsuitable for adoption.

Commissioner Larry Gross tentatively inquired what previous training ACT had. Barnette was hard pressed to describe anything except that she thought they had training in the use of "barrier boards," which they can use to fend off an attacking dog. The Commissioners -- none of whom have any animal sheltering experience -- did not ask how the non-existent boards are supposed to be held while an employee is scooping poop or feeding an animal.

When I asked several ACT at different shelters about this training later, they seemed surprised and said they can't remember having any formal training after they were hired. Only a few long-timers recalled years ago being taken by now-Assistant General Manager Louis Dedeaux to a protection-dog facility to familiarize them with avoidance techniques using trained attack dogs. The consensus was that they had learned shelter-safety practices by on-the-job experience and the guidance of their supervisors.

Barnette was asked by the Commission whether the employees had been given any counseling after the incident. She said she believed someone was sent in to hold a session at the shelter. She didn't explain that it was the city's basic EAP service, rather than critical-incident counseling and debriefing.

Barnette also assured the Commission that Pit Bulls with a bite history are sent to "rescues," rather than adopted out to the public. Apparently she didn't look at the records of the dog that attacked Priscilla Romero, or "Albert," the Pit Bull cited in last week's article, which attacked a young girl as her father contemplated taking him home as a family pet. Is it possible Brenda has not reviewed the numerous documented attacks by animals recently adopted from shelters?

A standard "no kill," shell-game practice is that Pit Bulls deemed dangerous are released to "rescues," (whose only prerequisite is a 50l(c)3 tax status but no animal-handling experience.) The "rescues" may then place them with "fosters" (members of the public) with the intention of finding a "forever home," also with members of the public. The dogs are often transported to several states or counties to accomplish this. That was the case when Sammy, aka "Sodam," was personally released by GM Barnette in April to an out-of-state rescue. But, prior to transport, he viciously attacked a potential female adopter.

According to current shelter records, approximately 50 Pit Bulls who have bitten or injured a human have been removed from quarantine at the shelter and are waiting in the back kennels of LA city shelters for Dangerous Dog hearings or "rescue." At least one has been there since April 2016. It is estimated that at least a dozen more are still completing the ten-day rabies-hold period required by County Health Dept. so they can add to the stockpile.

These are dangerous animals into whose kennels unprotected LAAS shelter workers and volunteers will go daily to clean, comfort and provide food and water. Attacks on shelter employees and volunteers do not usually become known to the public, but lawsuits, settlements and the prolonged housing of these dogs are real costs borne by taxpayers. There is also the consideration of the inhumaneness of locking these high-drive animals in isolated cages for months or years, which is as unfair to the dogs as it is to staff and public.

It doesn't appear that even this close call with death by a shelter worker will cause the Mayor, Councilman Paul Koretz (who chairs the Committee which makes LA's animal-related decisions,) or the Commission, to acknowledge that LA Animal Services’ staff, the public -- as well as the animals themselves -- are being deliberately placed in danger by the mythical, lucrative fund-raising illusion of GM Brenda Barnette and Best Friends Animal Society that the above methods (and others equally dubious, dangerous and inhumane) are achieving "no kill."

A recent informal poll of LA Animal Services Commissioners showed that none of them owns or has owned a Pit Bull. If, after this highly predictable tragedy in the agency they head, they still want all animals -- regardless of history -- to be released from the shelters and "saved," I suggest they, Mayor Garcetti, Councilman Koretz, and GM Barnette, set the example by each taking home several of the Pit Bulls which just finished the required confinement after biting and are now, according to Brenda Barnette, ready to rejoin society.

(Here is the full story )