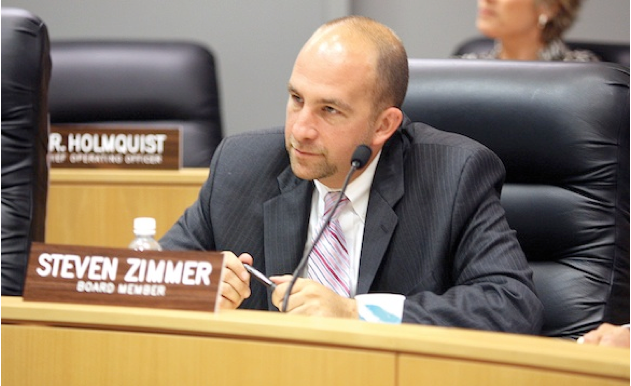 EDUCATION ALARM BELLS-Trump’s been working overtime to enroll anti-cabinet members, a sort of Through-The-Looking-Glass collection of zombie-apocalypse advisors whose prerequisite qualification seems to be whatever their predecessors were not. Anti-intellectual, antithetical, an anti-professional Barbarian horde of ideological battering rams, poised for imminent despoiling of the public purse and the public purpose.

Everyone knows the drill; it has been well-commented on already. What’s still flummoxing us all is the question:  how to beat back these privateers?

“Resist” is the catch-phrase du-jour, but it is a description, not a formula: Resist what, who or whom and how?

Well, Steve Zimmer is clearly the anti-Trump choice of LAUSD 4.

To resist Trump’s rogue cabinet of government deconstructivists, we must stand against those who would rebrand the public as private, who would catalyze the transformation of public commons into private holdings.

We must stare down that ideology which would privatize social security, the postal service, our public park service and lands, corrections facilities and military operations, and forsake public health to a profiteering, insurance-industrial complex, as well as deny science and public broadcasting the assurance of unbiased funding altogether.

And in insisting on that which is rightfully public and accountable to us, we must likewise desist in denying the alchemy of public district schools transformed into public charters. Operating outside of the public eye, without public input and absent public accountability, these schools are public only in the narrow sense that they siphon funds which are public. They are the ideological stepsister of privatization. But their champions are cloaked in disguises.

Not surprisingly it is hard to see what’s going on in the confusion of revolution, particularly one in which communications have been so deliberately scrambled. It is tricky to distinguish friend from dissembling foe, real from alternate fact.

But fortunately that same metaphorical blizzard-rope remains strung across the discombobulating swamp just as it ever was, stretching through the years of muck and gas at least as far back as Nixon’s Regime of disinformation and corruption: Follow The Money.

Remember in 2013 when New York City’s card-carrying member of the 1%, Mayor Michael Bloomberg, sent shock waves through a boring little schoolboard (schoolbored?) race on the opposite side of the country? He suffused our hyper-local election with a cool one million dollars from his citadel 3,000 miles away. And why would he do that? Who’s ever even heard of their schoolboard members -- much less had the foggiest idea what he or she does, or even paid the slightest attention to their election?

Here’s a clue: the budget of Los Angeles’ Unified School District (LAUSD) is larger than that of the City of Los Angeles (CoLA). Moreover, half the number of CoLA electeds – just seven individuals on the LAUSD Board – control that money. And incidentally, they thereby govern the vital, bedrock, foundational process of educating our city’s youngest citizens, and raising them up to be your neighbor.

Well that multi-million-dollar-laced schoolboard race is back on: it’s 2017 and March 7 is right around the corner. This time, the exogenous sugar daddy is LA’s republican former Mayor Dick Riordan. He is supported now as then, by LA’s own stealth puppeteer and public education foe, Eli Broad. And he’s anted up into the same fast-forwarded schoolboard race that, this time around, sports not just one, but no less than three individual challengers – all of whom are backed by the same ultra-rich, very narrow interests.

When an election features multiple ideological clones, double- and triple-endorsed by the same billionaire-backers, that’s code, not for strength of support, but for intensity of opposition: Witnessing such big bucks being pumped into the campaign against Steve Zimmer should concern all Trump resistors.

When the 1% swarm the public Commons they are animated not by a concern for the public, but by their interest in the public monies and by the public policies formed there.

Bernie-supporters and Trump-resistors should no more permit Betsy DeVos to desecrate the integrity of our nation’s Office of the Secretary of Education than accept any of Zimmer’s challengers to the board of LA Unified.

Steve Zimmer is the only candidate in LAUSD’s board District 4 who believes in public education.

Voting for Steve Zimmer is what it means to Resist Trump.

Submit your absentee ballot application for Steve by 2/28/17.

(Sara Roos is a politically active resident of Mar Vista, a biostatistician, the parent of two teenaged LAUSD students and a CityWatch contributor, who blogs at redqueeninla.com) Edited for CityWatch by Linda Abrams.