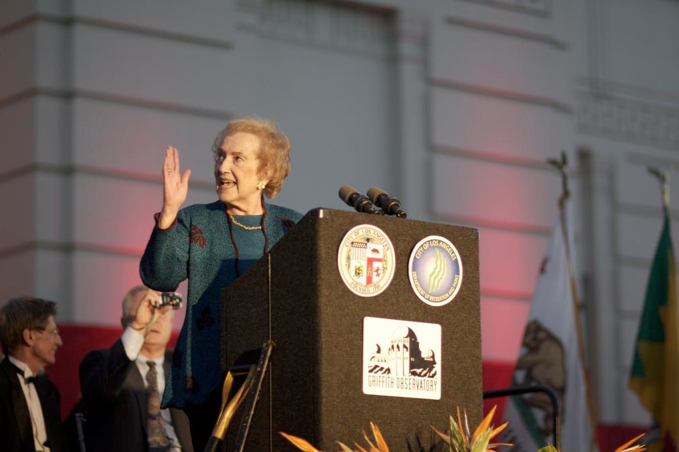 MY TURN-History does repeat itself. This is why scholars and smart politicians review episodes in history to help them find answers for today's challenges. Even though the issues we face today may appear different...they are just basically the same with some new twists.

Given all the chatter surrounding the California Coastal Commission and its effort to discharge its current manager, I thought I'd talk with one of the Commission’s initial proponents, former City Councilmember Joy Picus. (Photo: ribbon cutting ceremony at Griffith Observatory in 2006)

The California Coastal Commission was a grass roots effort initiated in part by the American Association of University Women, League of Women Voters and other civic organizations. They gathered enough signatures to get Proposition 20 on the ballot in 1972 and it passed. Picus was one of the more involved activists. The main goal was to save the California coastline from over-development and to preserve its beauty for future generations. This early interest in the environment would play an important role during her public life.

Proposition 20 gave the Coastal Commission permit authority for four years. Then the California Coastal Act of 1976 extended the Coastal Commission's authority indefinitely. This state authority controls construction along California’s 1,100 miles (1,770 km) of shoreline. The Commission is composed of 12 voting members, 6 chosen from the general public, and 6 appointed elected officials. The panelists are neither paid a salary nor a stipend for their work; it is a very political body with various degrees of interest in preservation.

Picus was a native of Chicago and started her political science studies at the University of Wisconsin. She and her long-time husband, Gerald Picus, a physicist, then moved to Woodland Hills in the San Fernando Valley.

She became active in the Parent-Teacher Association and League of Women Voters and served as president of the Valley branch of the American Association of University Women. She was also employed for three years as community relations director for the Jewish Federation Council.

In the late sixties and early seventies women were pretty much relegated to the" back benches." Picus, like many other women, was influenced by Betty Friedan's 1964 book, the Feminine Mystique.

Her political career began in 1973 when she challenged the incumbent City Councilman, Donald Lorenzen, in LA Council District 3. Lorenzen won in a tight election that demanded a recount; the vote was 27,575 for Lorenzen and 27,027 for Picus...a matter of 548 votes.

She took on Lorenzen again, and though he kept referring to her as a "wild-eyed environmentalist”... she won! "The big surprise was that this middle class democratic woman beat the incumbent in a district that voted 80% for Ronald Reagan," Picus told me.

She was the first woman to hold a City Council seat in the San Fernando Valley. District 3 covered the southwest corner of the Valley, including Woodland Hills, Tarzana and parts of Encino, Canoga Park and Reseda.

She remains the longest serving City Councilmember... a total of sixteen years. Because term limits came into play soon after she left office, that record of longevity still holds.

I asked her what it was like being a female politician in those days. She said that there were several women on the City Council during her sixteen years. She became accustomed to the double entendres and occasional outright propositions by both city officials and the public. A recall campaign against her was started by the fire and police unions since she was thought to be "anti-labor." But she said that she was able to have a collegial relationship with most of the men and the women went out of their way to help each other.

In 1981, the Los Angeles Times wrote about District 3:

“Although the district is largely white and middle class, it is complicated and anything but homogenous. A study in contrasts, it has expensive ranch homes in Woodland Hills that are minutes away from shack-like dwellings in Canoga Park, a largely Hispanic barrio dating from the early 1900s.”

Picus became a "hero of local conservationists" since she pushed builders to provide more open space for parks. She also supported transportation projects, called attention to the need for waste recycling, and opposed oil drilling in the Pacific Palisades.

Those were heady days in Los Angeles politics that produced more than its fair share of political scandals. Armand Hammer, the multimillionaire industrialist, wanted to drill oil off the Pacific Palisades Coast. But the Palisades had always had a strong community organization and they convinced Picus to fight the drilling. When it came up before City Council it passed 9 to 6. The big surprise was that the new Mayor, Tom Bradley, vetoed it. In order to over-ride the veto, they needed ten votes.

She recalled fondly that all of the sudden she became very popular and was invited to all the Armand Hammer social events; everyone was putting pressure on her to change her vote. He finally stopped inviting her and drilling off the Pacific Palisades never happened.

Developing policies and programs on behalf of working parents and their children was another priority for Picus. She authored the city's Child Care Policy, which made Los Angeles one of the first cities in the country to hire a full-time child-care coordinator.

She also spurred the opening of a child-care center for Civic Center employees in Downtown Los Angeles, financed by the city and federal governments. In 1989, she persuaded the City Council to create preferences in city contracts for companies that offered child-care benefits to their employees.

Picus was named "Woman of the Year” by Ms. Magazine in 1985, a result of her successful drive to include an historic "pay equity" plan in the city's collective bargaining agreement with the American Federation of State, County and Municipal Employees (AFSCME.) She was the only politician to receive the award that year.

Also known as "comparable worth," the effort refers to upgrading pay rates for jobs that were paid lower wages because they had traditionally been held by women. The magazine credited Picus with "helping bring about a $12 million pay equity agreement between the City of Los Angeles and 3,900 of its employees, most of them women."

According to an old Los Angeles Times interview, Picus was dubbed by some as a "Mary Poppins," because of the " 'flighty impression' she sometimes conveys." She replied that her "preparation for political life came from activities primarily with other women," and so in the beginning she was not "taken as seriously" as were the men. She emerged, the reporter wrote, "as a woman of enormous ego and drive, with tremendous energy and determination."

Today Joy Picus remains active and involved. She is still serves on the boards of several civic and cultural groups. She keeps track of what goes on in the City politically. She notes that some of the things she and her colleagues tried to change are still status quo.

The point of this article is to not just revisit the past, but to remind our City Councilmembers that great things have been accomplished in the past by prior City Council colleagues.

The job is not just about fixing potholes or passing zoning changes – it’s about having the vision and persistence to tackle the big challenges. And much more than worrying about the next election!