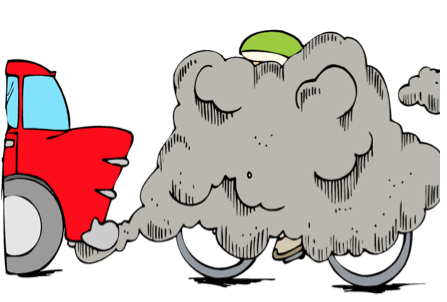 CORRUPTION WATCH-I’ve got a cracker jack idea – let’s freshen up our children’s classrooms with lead paint. Better yet, let’s protect the children from fire by using a lot of asbestos.

Quoting an article by Sarah Stone in Today I Found Out, “The heavy metal additive also decreases the amount of time that the paint takes to dry, makes the paint more durable, and causes the paint to be more moisture resistant. This made lead-based paint ideal for use in homes, on metal exposed to the elements, and even children’s toys.”

Asbestos has great qualities such as thermal and acoustical insulation, fire protection, strengthening of other materials. For example, asbestos strengthens floor covering making them resistant to humidity, scratches and scuffmarks.

So, let’s all cheer for more lead paint and more asbestos, especially in children’s play areas.

Oh, I forgot one of the big three in the triumvirate of good things for children’s health – toxic auto emissions. Not only do autos emit toxicity from their engines but the brake pads of trucks have unique type of “brake dust” for children to inhale. No doubt this is why during Garcetti’s tenure as councilmember for CD 13, he allowed the playground for the Helen Bernstein high school to be located contiguous to the metered on-ramp of the Hollywood Freeway where trucks have to stop before entering the freeway. By placing the school and its playground next to the freeway rather than 500 feet away as the law required, the children can get maximum benefit of the toxicity. I guess “Whatever doesn’t kill you makes you stronger,” or so the idiotic saying goes.

As the Declaration states, everyone has certain inalienable rights and “that to secure these rights, governments are instituted among men, deriving their just powers from the consent of the governed.”  The key word is “consent.”

Does a government which intentionally lies to and conceals known facts from the public have the “consent of the governed?”

Suppose lead paint, asbestos and auto toxicity are all very dangerous to children’s health and the government intentionally conceals that information from the public. How does that concealment comport with the consent of the governed?

Suppose that the government them tells the public that exposing children to higher concentrations of lead paint, asbestos and auto toxicity is healthy? How legitimate is a government that spews forth false and misleading data to make a few people very wealthy, while at the same time making children sick?

People have learned about the dangers of lead paint and asbestos, but the City is still promoting the idea that auto toxicity is beneficial to children by concealing the facts from the public. Let’s look at the situation.

Bike Lanes in Major Streets vs Bike Paths Away from Autos

Let’s Look at The Research on Bike Lanes

Harvard University in its August 15, 2014 Study, Impact of Bicycle Route Type on Exposure to Traffic-related Air Pollution, found that bike paths are significantly less polluted than lanes painted on the road, especially when there’s distance and some vegetation as part of the protection.

What Is the Role of Peak Exposure?

When one rides in a bike lane on a major street, the Peak Exposure is vital. While the average overall toxicity of a route may not seem significant, short-term deep inhalation of fine particulate matter can have damaging health impacts on children. Unlike car passengers, cyclists often breathe very deeply thereby inhaling the toxic emissions. If bike lanes were to be located in safe places -- like on a side street with almost no vehicle traffic but lots of vegetation -- there would be no health risk. These studies were deleted from the public record.

The Data Was Easily Available to the City

A 2011 article in the LA Times discussed how bicyclists may be inhaling twice as much soot as pedestrians: “You've decided to help your health and the environment by riding your bike to work. Good for you! Sorry to have to deliver the bad news: you may be inhaling more soot. The amount might be more than twice as much as urban pedestrians, says a pilot study presented Sunday at the European Respiratory Society's Annual Congress. The study involved five cyclists who regularly biked to work and five pedestrians from London. They ranged in age from 18 to 40 and were healthy nonsmokers.”

Bike Lanes in healthy locations are worthless as Road Diets. The actual reason the Garcetti administration and councilmembers Bonin conceal the health danger to children is to create Road Diets. They need an excuse to remove travel lanes from major streets in order to create significant traffic congestion. The perverse motivation behind concealing the health dangers of bike lanes in major streets to children is to evade the state’s environmental law.

A Feb 16, 2012 article in ZD.net, “Are bicycle lanes really green?” quoted Claire Bowin, city planner of Los Angeles: “The city knew there was a problem with environmental clearance …Then we looked at what was happening in San Francisco. It’s [CEQA, the environmental law] an obstacle, and you have to work with that process to look at ways to make it work. To me, it’s all part of the mountain you're climbing.”

Yes, San Francisco’s approach to bike lanes was challenged under the State environmental laws.  When one gets to court, the judge may only look at what information was allegedly in front of the City when it made its decision. Hence, removing all adverse data from the public record leaves the court with no data to show that bike lanes in major streets pose a serious health risk to children.

We should note that Ms. Bowin was speaking in 2012 and back then she admitted that the City already knew that the toxicity of bike lanes in major streets was an environmental risk. Is anyone so naive to think that it was mere coincidence that this health data was cleansed from the City’s public record for Mobility Plan 2035?

The lunacy behind this on-going fraud is the delusion that if the City can make traffic congestion horrendous enough, then people will use subways and fixed rail transit. Road Diets turn traffic congestion into an unbearable nightmare. The Garcetti Administration is victimizing children by removing from official documents important research data and numerous articles from around the world that have shown the health dangers of bike lanes in major streets.