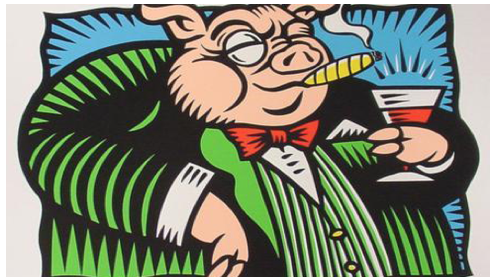 CORRUPTION WATCH-Unlike many taxes, the Wall Street tax gets us taxpayers nothing in return. We do not get sewers or streets or parks or police or paramedics. Each month, millions of Angelenos cough up anywhere from $500 to $4,000 for the Wall Street tax. No one has taken the time to calculate the exact amount of it, but we know that newcomers pay a higher tax than Angelenos who are long-time residents. The Wall Street tax is the extra rent or mortgage Angelenos pay each month for housing costs over and above the fair market value. One way or another, our rent and mortgage payments end up on Wall Street.

Our absurdly high housing costs are not caused by a demand for more housing. In fact, based on the actual data, the demand for housing is decreasing while housing costs are increasing. This phenomenon is not new to economics. Fraud and corruption in the market place occur for one purpose: to force people to pay more for a commodity than it is worth. Housing is no different.

Because we have more births than deaths, the City’s population is hovering around four million. The City has declared erroneously that it had passed the four million mark three times, but those announcements have been premature. LA has been experiencing a significant exodus of middle class Millennials, a group that is the most vital to a city’s economy. But the city never issues a correction.  Newborns do not rent apartments or buy houses, but everyone who leaves LA gives up his or her living space. This is how we know demand for housing is falling.

Sources of the Housing Market Frauds

After the Crash of 2008, banks and other financial institutions did not put foreclosed detached homes back on the market as had been their custom and practice in prior decades. Instead they rented them. This hoarding restricted supply of homes for sale and that increased the sales prices. A restricted supply is not an increase in demand. Since the market had recently crashed, people incorrectly assumed that it was good that housing costs were increasing. Rather, Wall Street was transforming the housing market by pushing Angelenos out of home ownership so that by 2016, fewer than 40% of Angelenos owned a home. (SCAG 2017, Profile of the City of Los Angeles)

There is persistent hype of the value of homes. The price which people will pay for a home or rent for an apartment is a function of one’s belief. But supply and demand are based on reality. If people knew that the homes they were buying for more than $1 million were in fact worth less than $400,000, sales would stop over night. The public, however, has been bombarded for a decade with fraudulently inflated housing prices and rents to the point that these lies which have been repeated thousands of times have come to be perceived as truth.

As readers who follow CityWatch know, the corrupt voting trading pact at City Council has made all residential properties worth their Development Value which is two, three and four times higher than their Living Space value.

Wall Street Is the Beneficiary of All the Frauds

Wall Street is the ultimate beneficiary of all these fraudulently high mortgages and rents. Since the high mortgages and rents are based on fraud, the homeowners and renters are paying a fortune and getting nothing in return for the excess payments. When a home which is actually worth $400K sells for $1.5 M, the buyer is paying a mortgage on $1.1M of nothingness.

All Angelenos are Victims of Massive Real Estate Frauds

The Wall Street tax is no different than if each night a robber accosted you at your front door and ade you pay between $25 and $100 just to enter your house. Actually, society would be better off if we paid local robbers as they then would spend the money here in LA and bolster our economy.

The billions of extra dollars which currently flow to Wall Street can never be spent for goods and services in Los Angeles. Those billions should have been spent in our restaurants, gyms, dry cleaners, movie theaters, clothing stores, and placed into pensions or college funds. Every reader can decide for him or herself how to spend the extra $500 to $4,000 per month they would have if they did not have to pay the Wall Street tax.

LA’s Economy Would Be Better Without the Wall Street Tax

Whatever billions upon billions of dollars Wall Street is sucking out of Angelenos’ pockets, we are harmed…except for the politicos who operate the City Council’s extortion-bribery Vote Trading Pact.  When we look at the relationship between urban densification -- which always pushes housing costs far above where they would otherwise come to rest -- and a society’s wealth distribution, we find that cities like Los Angeles with a high Wall Street tax have the greatest disparity in wealth. The Wall Street tax systematically transfers wealth from everyone who pays a mortgage or rent to the top 1%, aka, The Davos Set, i.e. Wall Street.

Next time we shall discuss how to stop the transfer of our wealth to Them.