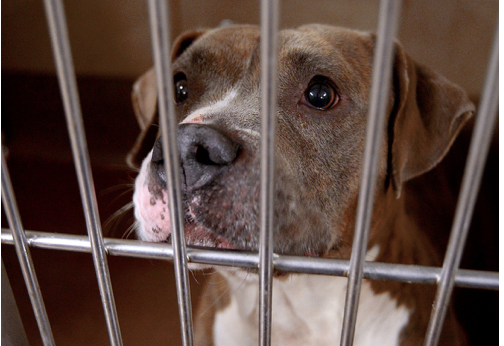 ANIMAL WATCH-Two LA Animal Services' Commissioners appointed by Mayor Eric Garcetti propose that potential adopters should not be informed of the breed -- or apparent breed -- of dogs they consider taking home from Los Angeles city shelters.

Commissioners Layne Dicker and Roger Wolfson, both attorneys, are enthusiastic about a discussion of omitting any reference to breed on the kennel cards for dogs -- predicting this will cause more Pit Bull-types to be adopted.

Is this deliberate deception, insane egotism, or just unadulterated lack of concern for the safety of families and pets by two of Garcetti's appointees who believe they know more about what's good for you and your family than you do?

IS A GOVERNMENTAL AGENCY ENTITLED TO WITHHOLD INFORMATION?

The proposed policy will affect all dogs, not just Pit Bulls. If shelter visitors can devote sufficient time and attention to a strong, high-energy dog, it may be their choice to adopt a Pit Bull-type. However, they deserve to be fully informed pre-adoption of any behavioral issues reported by the past owner or observed by shelter personnel, including any animal or human aggression. That is true of any pet considered.

It appears shelter staff will be precluded from sharing any "negative info" about an impounded dog. (This includes disclosing the suspected or known breed or behavioral concerns.)

If Pit Bulls or their mixes are such desirable, risk-free dogs as both Commissioners imply, why does the public need to be fooled into adopting them? 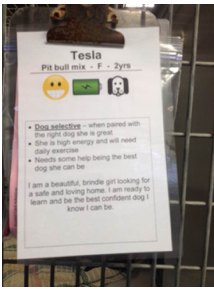 It is not clear if this omission of breed will apply equally to ALL animals in the shelter, including cats, rabbits, reptiles, etc. -- or will just discriminate against canines.

This proposal can create chaos for shelter staff who are often asked for information about dogs available for adoption. It will take extra time for them to explain that they cannot candidly answer questions or make recommendations to a public that relies on their knowledge and suggestions regarding breeds and their characteristics.

BARNETTE PREPARES HER STAFF FOR THE UPCOMING DISCUSSION

General Manager Brenda Barnette is apparently expediting this "discussion," which is on the agenda for the 9:00 a.m. meeting on Tuesday, August 22.

The discussions by LAAS Commissioners are largely emotion-based (except for the analytic approach taken by Commissioner Alisa Finsten, formerly on the Mayor's staff) and there is little inquiry into technical aspects of implementing policies or changes.

No one on the Commission has animal-shelter or field-services experience. Barnette headed a small, private, donation-funded humane society in Washington before coming to LA. She seems unaware that taxpayers of this city are paying her $220,000+ annual salary for expertise, not for omissions or speculations by advocacy groups.

Here's the advisory GM Barnette sent out to her staff electronically last week. Please note that it does not ask for their professional input or opinions.

One of the upcoming discussion items the Commission will discuss and receive public input is about taking breed labeling off of the cage cards and the website.

To provide you with some insight and perhaps to spark some of your own questions, I am sharing two articles that may help you understand the problem and to make your own informed decision.

For statistical reporting, the database will still contain the breed descriptions you or the former owner describe. They just will not show up on the cage card, on the internet or on the Adoption Agreement.

Thus, information in the possession of the shelter to help adopters make informed decisions will be in the database, but reserved ONLY for "statistical reporting." If breed and other information is important enough for reported shelter stats, it is important to the public. And, if non-confidential information is available within a government agency, the public has a right to it, according to numerous court rulings.

IS THE GROUP PROMOTING "NO BREED ID" CONNECTED TO BEST FRIENDS?

The links provided by GM Barnette are to the Animal Farm Foundation, a privately funded group, with the Mission Statement: To secure equal treatment and opportunity for "pit bull" dogs.

Their website explains, "Any dog who has been labeled a “pit bull,” whether pure bred or mixed, might be discriminated against. Our work supports any dog experiencing discrimination based on the label “pit bull.”

Animal Farm Foundation  provides on its site an in-depth interview regarding the study sent by Barnette to her management staff,  What’s in a Name? Effect of Breed Perceptions & Labeling on Attractiveness, Adoptions & Length of Stay for Pit-Bull-Type Dogs.

Here are just some brief highlights of the findings. You may read it in its entirety here.

The published paper is a compilation of four studies, three of which analyze how people react to and rate photos and videos of various "pit bull types" and lookalikes.

Study 4 found that there was a one-and-a-half day reduction in length of stay for pit bulls at Orange County Animal Services after removal of breed identification and a 12% increase in adoption,  but also advises that other changes in shelter advertising of available pets and expanded operating hours,  "…were likely to have contributed to improved adoptions and length of stay."

The study's concluding line suggests that, "…a validated behavioral assessment would likely be a better way to inform potential adopters about the behavior of individual shelter dogs."

Note:  Not included in, nor a subject of this study, was a survey of how many people may have left the shelter when they discovered there was no breed identification.

The study and discussion unequivocally are for the purpose of getting more Pit Bulls adopted from the shelters, but are also an admission that many adopters are reluctant to trust the safety of their family, friends and community to a dog with a reputation for unpredictable attacks and with an unknown behavioral history.

The shelter might be better served by building a reputation that it assures all Pit Bulls made available to the public do not provide any cause for concern based on known behavior.

Isn't the refusal to provide information a potential liability for the shelter and the City?

There is no defense for intentional concealment of danger, attorneys say. The public assumes responsibility for adopting an animal, but that does not excuse misrepresentation by the shelter:

A mother who adopted a dog who bit her 12-year-old daughter says the shelter deceived them.

Diana Dolan, of Albuquerque, New Mexico, told INSIDE EDITION a local shelter told them the dog they adopted was a Boxer named Gardner. But a week later, she said he was sitting on the couch with her when, "he just suddenly lifted his head and snarled at me," she said.

A few days later, as a friend caring for her daughter sent a text saying: "Gardner just bit May and me."

Records showed "Gardner" was actually a mixed-breed pit bull named "Danger." “I was angry because it showed a certain intent to be deceitful,” Dolan said.

Jim Ludwick, second in command at the shelter, became a whistleblower and filed complaints against his own boss, Director Barbara Bruin. He claimed Animal Welfare Dept in Albuquerque allowed dangerous dogs to be adopted to the public. “We let dogs out that should never have been released...that went on to attack people and animals,” Ludwick said.

He believes the shelter has adopted out more than 100 dangerous dogs for adoption in the last year, which was disputed by Director Bruin.

Another animal, Mugsy Malone, went on to attack a three-year-old girl, Ludwick said. “Her face was ripped up. The father had to hit the dog  repeatedly with a rock trying to get the dog off of his child's face.” After the attack the dog was given to a rescue group,” he said. “That dog should have been euthanized.”

Chris Luhrs, a 40-year-old Disney World mechanic was standing in a tiny room at the Lake County Animal Shelter considering adopting a pit-bull mix named “Big Man,” on Feb. 2, 2017, when his pregnant partner, Julie Grant noticed that the dog's "smile" was not friendly.

“He was getting petted one second and the next, it was a full-on attack — barking and biting. He bit my nose, and at the same time knocked out my front tooth…He lunged for her [Grant], and I intervened.”

Grant said a worker told the couple Big Man was “the shelter favorite” because of his calm demeanor, and she mentioned no problems. County records show four documented aggressive incidents of threatening shelter workers.

It’s a dog bite so severe, it tore a man’s nose right off.  The family said it could have been prevented.

“I was horrified to have this happen to my son,” said Mark, who did not want to publish his last name. “It’s a very hard thing to watch as a parent,” added Mark’s wife, Maggie. They are speaking on behalf of their 21-year-old son. Their son is suing Labrador and Friends, and the County of San Diego.

WHERE IS "TRANPARENCY" IN THE BREED-REMOVAL DISCUSSION?

Is the deliberate withholding of breed identification and prior history of dogs to be placed in homes indicative of Mayor Garcetti's promised "transparency" in the City of Los Angeles?

The exact breed of a dog or combination in a multi-breed is not always determinable by appearance, but experience provides an educated guess by Animal Control Officers and shelter staff. Isn't a potential adopter entitled to their expertise and any information provided by the previous owner to make an informed choice?

And, aren't taxpayers who fund LA City shelters and pay for lawsuits and settlements entitled to professionalism -- not planned omission -- in the management of LA Animal Services?