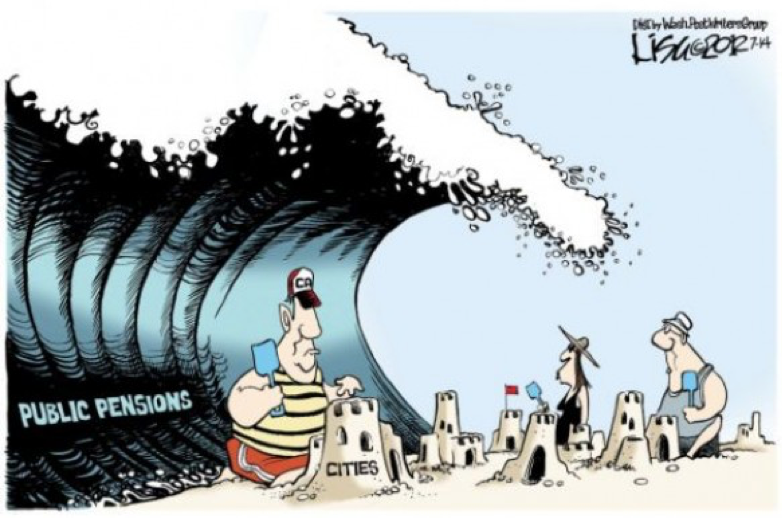 LA WATCHDOG--You would never know that the City of Los Angeles is in the midst of an ever-growing pension crisis if you attended or listened to a meeting of the Board of Administration of the Los Angeles City Employees’ Retirement System (“LACERS”), the $16 billion pension plan for the City’s civilian employees.

Unfortunately, these alternative metrics and possible solutions are not topics for discussion at the meetings of the Board of Administration.  Rather, the Actuarial 101 Education Presentation by Segal Consulting, LACERS actuary, is very elementary and does not shed any light on the problems facing LACERS, its 45,000 members, and the City.

This is not surprising as Mayor Eric Garcetti’s appointments to the Board of Administration are there to not make waves, but to do what they are told to do by the Mayor.  Furthermore, three of his four appointments do not have the financial experience that will allow them to understand the long-term effects of relying on bogus assumptions that result in underfunding the pension plan.

Theoretically, the Board members fiduciary responsibility is to the pension plan.  But often this fiduciary duty is compromised.

In 2011, Board member Elizabeth Greenwood told a group of Neighborhood Budget Advocates that she also had a fiduciary duty to City employees and that increased contributions to LACERS would leave less money to fund the raises for City employees.

And during a recent Board discussion that involved the lowering of the investment rate assumption, two Board members, Board President Cynthia Ruiz and Sung Won Sohn, stepped out of the room during a hastily called break and met in a side hallway with a senior member of the Mayor’s staff.  They then returned to the meeting and voted, as instructed, on alternative that resulted in a $20 to $40 million “savings” to the City, but at the expense of LACERS and its beneficiaries.

So much for the “trustees” fiduciary duty.

This year, the City’s contribution to LACERS and Fire and Police Pension Plans is $1.2 billion, or 20% of the General Fund.  The combined unfunded liability is $9 billion (80% funded).  But if the more realistic, but still optimistic, investment rate assumption of 6.25% is used, the annual required contribution increases by $600 million to $1.8 billion (29% of the General fund) and the unfunded liability soars to $15 billion (70% funded).

And more than likely, the annual required contributions will increase at a faster rate than revenues, crowding out basic services such as the repair of our streets and alleys.

Will Mayor Garcetti and the City Council (in particular Paul Koretz, the head of the Personnel Committee, and Paul Krekorian, the head of the Budget and Finance Committee) finally follow up on the recommendation of the LA 2020 Committee and establish an independent committee to review and analyze the City’s two underfunded pension plans and to make recommendations that will result in sustainable pension plans?

Or will City Hall avoid the truth, continue to kick the can down the road, and endorse a policy of Intergenerational Theft?