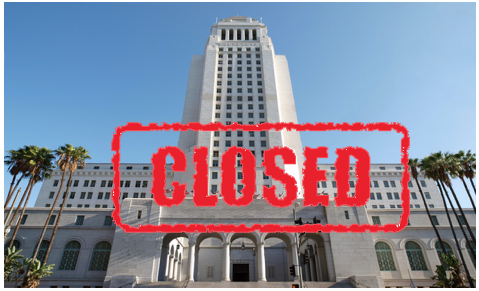 LA WATCHDOG--Our streets are some of the worst in the country, hardly worthy of a world class city that will be hosting the 2028 Olympics.  Yet the repair and maintenance of our 28,000 lane miles of residential and arterial streets is not a priority for City Hall.

Over the last two years, Mayor Eric Garcetti and the Budget and Finance Chair Paul Krekorian have cut the funding from the General Fund to the Pavement Preservation Program by over 50% (from $52.3 million to $25.5 million).  At the same time, General Fund revenues have increased by $435 million.

Underlying the budget cut for the Pavement Preservation Program is the ever growing expenditures for personnel, ranging from increases in salaries; pension contributions; health, dental, and other benefits; workers’ compensation benefits; and police overtime.

For this year alone, the $213 million increase in personnel expenditures exceeded the growth in General Fund revenues by $10 million.  This shortfall results in a “service insolvency,” where the City is able to pay its bills (primarily salaries and benefits), but basic services are neglected or “crowded out.”  These services include the maintenance of our streets, sidewalks, parks, urban forest, and the rest of the City’s infrastructure as well as desperately needed investments in computer technology and management information systems.

Overall, the budget for the Pavement Preservation Program has been cut 17% over the past two years, from $157 million to $131 million.  Sources of revenue other than the General Fund ($25 million) have remained stable, including the Special Gas Tax ($65 million), local return revenues from the Metro related sales taxes ($32 million from Measure R and Proposition C),and the Street Damage Restoration Fee ($9 million).

The City claims that this cut in the Pavement Preservation Program will not result in a lower level of service.  Through “operational efficiencies and cost effective methods of implementation,” the City will be able to repair 2,400 miles of streets, up from 2,200 in in 2015.

The Pavement Preservation Program is designed to maintain the condition of our streets in their current average poor condition.  But it does not address the 8,200 miles of failed D and F streets that are in need of very expensive resurfacing or reconstruction.

The ticket to repair and maintain our failed streets is estimated to be in the range of $3 to $4 billion over the next fifteen to twenty years.  This will require a tax increase of about $250 million a year.  This is the equivalent of a 5% increase in our property taxes, a half cent increase in our sales tax to 10%, or a parcel tax of $320.

There are ways to eliminate or mitigate this general tax increase.

The City could allocate a greater share of the $250 million in Local Return revenue from the Metro related sales tax, especially those related to Measure R (2008) and Measure M (2016) to our failed streets.  The same for the local return of an estimated $100 million from the State’s new $5.2 billion a year gas and vehicle tax.  The City could also be more aggressive in collecting the Street Damage Restoration Fee as was recommended by Controller Ron Galperin.

The City could also allocate a portion of its increased budget revenues to our failed streets.  Over the next four years, revenues are projected to increase by $650 million.

Alternatively, we would benefit from outsourcing the repair and maintenance of our streets to independent contractors who would not be burdened by the City’s overly restrictive work rules.  They are probably more efficient than the poorly managed Bureau of Street Services that was panned in Controller Galperin’s 2014 audit.

Before the City considers another massive tax increase, it needs to not only develop a detailed operational plan for the repair and maintenance of our 28,000 miles of streets, but also a comprehensive financial plan for the City that considers alternative sources of financing and eliminates the “service insolvency” that adversely impacts our quality of life.

Over the last year, Angelenos have been hit with $1.6 billion in new taxes.  This includes our share of the tax increases implemented by the Metro and the County (40%) and the State (10%).  This is the equivalent a 30% increase in our property taxes or a 2½ cent increase in our sales tax.

Can we afford to be hit with another massive tax by the City?