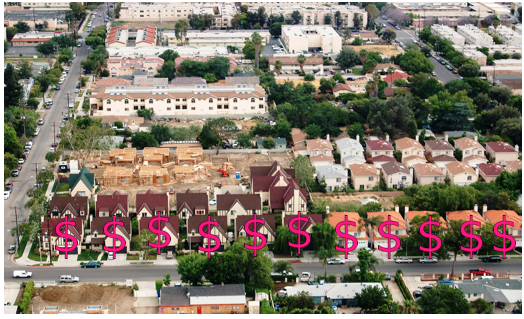 LA WATCHDOG--In an Op-Ed column Tax Land, Not Development last week in the Los Angeles Times, three professors at the UCLA Luskin School of Public Affairs have proposed a “flat tax of $3 per day on every parcel in the City” to fund affordable housing in the City of Los Angeles.  This “small land tax” would replace the proposed linkage fee on new residential and commercial development that would raise “only” $100 million a year, an amount that the three professors deem insufficient to solve the City’s housing problem.

But this “small land tax” of $3 a day is equal to $1,100 a year.  And based on 785,000 parcels in the City, City Hall would be flooded with $860 million a year, a truly scary thought given the lack fiscal responsibility and managerial competence of our elected officials.

For the owners of an average house valued at $500,000, their property taxes would increase 20%.

The three professors make a valid argument that the linkage fee on new development will increase the cost of residential housing and therefore discourage new housing.  But the linkage fee is chump change compared to the costs associated with the impact of Measure JJJ that was approved by the voters in November, inclusionary housing, project labor agreements, overly restrictive work rules, and the requirement to pay prevailing wage, all of which will add 25-35% to the cost of a project.

All these costs will lead to more luxury housing and even higher rents, making the City less affordable for all Angelenos other than the top 20% of wage earners and trust fund beneficiaries.

Unlike the linkage fee that can be enacted by the City Council and the Mayor, this $1,100 parcel tax must be approved by two-thirds of the voters.  But this will not stop City Hall who, along with the County, State, and Community College District, have already socked Angelenos with $1.6 billion in new taxes over the past year.  This includes our share of the new $5.2 billion gas tax, but does not take into consideration the impact of the new Cap and Trade legislation.

This would be in addition to new taxes that will be needed to fund the $4 billion cost to repair and maintain our streets and sidewalks, the $1.5 billion for the revitalization of a small section of Los Angeles River (Mayor Garcetti’s pet project), the $500 million to improve the Civic Center surrounding City Hall, the $470 million to upgrade the outdated Convention Center, and the $8 billion for the City’s storm water program. And this does not even begin to include the cost of paying for the City’s unfunded pension liability that is north of $20 billion according to Moody’s Investor Service, the national bond rating agency.

Over the next 15 months, the Mayor and the City will be all over us to approve new taxes, including those for affordable housing.  But this constant quest for more of our hard earned money is not accompanied by any detailed operational or financial plans or truly independent oversight.

Rather, despite a $1.3 billion (28%) increase in General Fund revenues since Garcetti became our mayor, the City has given us Structural Deficits, lunar cratered streets and broken sidewalks, and massive unfunded pension liabilities while City employees are enjoying over the top compensation packages that will only get richer in the upcoming, behind closed doors negotiations with the campaign funding leaders of the City’s labor unions.

The days of “Trust Us” are over.  We cannot afford a 20% property tax increase. We can no longer afford this city. Or, perhaps this Mayor and this City Council.