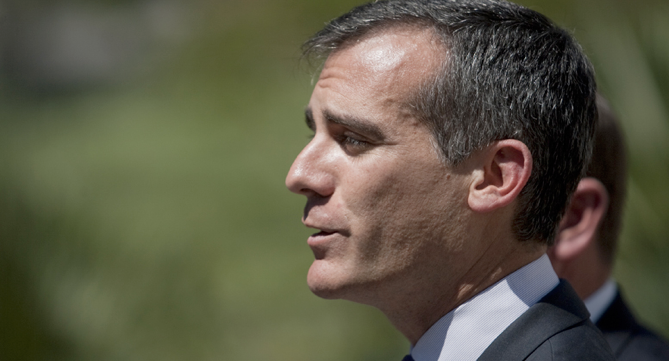 LA WATCHDOG--The politically appointed Board of Commissioners of our Department of Water and Power recently approved two money losing water recycling projects that will result in DWP blowing $93 million of Ratepayer money.  This amount represents about a quarter to a third of the recently approved five year, 25% increase in our water rates.

These Board decisions (with only one the five Commissioners voting NO on both deals) were made without relying on any financial analysis prepared by the Department.  Nor were these two projects compared to other alternative water saving investments that may have higher rates of return.  To the contrary, I supplied the Commissioners and DWP management with a cash flow analysis (based on the Department’s assumptions) for both recycling projects that showed that these two uneconomic water recycling projects were stinkers.

But the politically appointed Commissioners were only following the wishes (orders) of Mayor Eric Garcetti (photo above) who, through his Executive Directive No. 5 (Emergency Drought Response – Creating a Water Wise City) dated October 14, 2014, established a goal of reducing the purchase of imported water by 50% by 2024.  This will require increases in local supplies through conservation, the remediation and replenishment of our aquifers, and increases in our local supplies through the recycling of wastewater and storm water.

Unfortunately, this aspirational, politically inspired Executive Directive was not accompanied by any operational or financial analysis, putting the Department in a very difficult and awkward position.

The first project, the $20 million Griffith Park South Water Recycling Project, is located within the nation’s largest urban park and will supply 477 acre feet (156 million gallons) of recycled water a year to the Roosevelt Golf Course and the surrounding area.  Based on the Department’s assumptions for the purchase price of treated water from the Metropolitan Water District (“MWD”), this project does not recoup its investment until 2040 (23 years).

Alternatively, it would take over 40 years for this debt financed project to repay a loan that had an interest rate of 5%.

Furthermore, this deal is double stinker as it is a pet project of former City Councilman Tom LaBonge and the responsibility of the Department of Recreation and Parks, not DWP and its Ratepayers, since it located entirely within Griffith Park.

The second water recycling project, the $73 million Elysian Park Downtown Water Recycling Project, will supply 2,561 acre feet (835 million gallons) of recycled water a year to Elysian Park, DTLA, Exposition Park, Boyle Heights, and other adjacent areas, once again reducing the need for potable (drinkable) water. But like the Griffith Park pet project, the DWP does not recoup its investment until 2040 and would not be able to repay the loan until 2057.

The economics of these two projects assume that they will have a life of 30 to 50 years.  However, this may be a bogus assumption if the recycled water from the LA-Glendale Water Reclamation Plant can be processed into potable water (direct potable reuse or better known as toilet to tap) that can be introduced directly into our water system.  This would result in a “stranded” asset, resulting in an even greater hit to the Ratepayers.

The debt laden Water System does not have the flexibility to sink cash into money losing projects as its ambitious $5.5 billion capital expenditure budget is already causing its long term debt and debt ratios to balloon to levels where it will endanger its coveted bond rating.

While the aspirational goal of reducing our dependence on purchased water from Northern California and the Colorado River is worthy target, it must also be accompanied by a rigorous operational and financial analysis that results in the Department investing in projects that have positive rates of return and at the same time discarding the dogs.  Otherwise, Garcetti’s green policies will result in considerably less green in our wallets.

[Note: On Wednesday, MWD, the major supplier of water to our City, issued a press release stating that its “stress test” showed that it had sufficient water supplies to meet the demands of its customers for the next three years.]