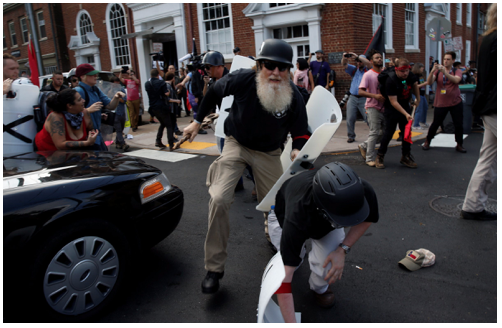 Most of the world, except for the GOP right wing, can recognize a crazy person. Americans have avoided electing mentally ill people as President before because candidates running for that office have first served in other elected capacities. Even though this informal requirement of holding prior elected office has still allowed a lot of unqualified people into government, it has also screened out the most mentally unbalanced from running for President. Had Trump been on the NYC City Council, he would have shunned a future in politics -- his ego could not have withstood the heat of constant criticism. Trump, however, only knew settings where he could point his stubby finger at someone and holler, “You’re fired.” Since he had no previous experience in public service, voters had no opportunity to see that Donny does not play nicely with other children.

During the election season, the military had to know that Trump was mentally ill. The NSA and the CIA certainly should have known since that’s one of their jobs – to assess the mental stability of world leaders and then devise strategic plans to protect the United States. As Trump is not the silent brooding type, his mental illness was obvious. As a histrionic and a narcissist with paranoid features, he reminds us of the Bonnie Tyler lyric, “sitting on a powder keg and giving off sparks.” In Trump’s case, the sparks have been daily fireworks. No interviews or diagnostic tests have been necessary to diagnose his limited mental capacity and grandiose sense of entitlement coupled by intermittent paranoia.

The powder keg that was ignited this weekend has smoldered in our society for hundreds of years as a form of Group Rights. Although our nation was founded on the notion of inalienable individual rights including life, liberty and the pursuit of happiness, the populace has always had a love affair with Group Rights, aka equality. De Tocqueville noted this passion in the 1830s, pointing to the evils it held out for the nation. Group Rights often result in internecine warfare. This weekend the violence of Group Rights once again burst into the American consciousness in Charlottesville, Virginia.

Until Americans give up their attachment to Group Rights and return to the inalienable individual rights promulgated by the Declaration and the U.S. Constitution, we will experience endless Charlottesvilles.

Supreme Court Justice Kennedy, in his opinion in Lawrence vs. Texas, (539 U.S. 558 (2003)), based the existence of gay rights on the individual right of liberty and not on some group right inherent in being gay. He did not refer to the notion of equality as either an inalienable or a constitutional right. Justice Kennedy wrote:

“Liberty protects the person from unwarranted government intrusions into a dwelling or other private places. In our tradition the State is not omnipresent in the home. And there are other spheres of our lives and existence, outside the home, where the State should not be a dominant presence.  Freedom extends beyond spatial bounds.  Liberty presumes an autonomy of self that includes freedom of thought, belief, expression, and certain intimate conduct. The instant case involves liberty of the person both in its spatial and more transcendent dimensions.”  -- Lawrence vs. Texas, 539 U.S. 558 (2003).

Justice Kennedy was repudiating the idea of “group rights,” which needlessly found expression in affirmative action wherein numerical quotas were mandated on the belief that Blacks were inherently inferior, and thus, they could not earn a college education or obtain jobs except via quotas. This liberal variant of hideous racism led us to divide people into groups and to dole out rights according to an individual’s membership in a specific group. Using the group rights philosophy, the child of a Black neurosurgeon living in West Los Angeles was more deserving of preferential college admissions than a poor white kid from West Virginia whose father was an alcoholic and whose mother died in child birth. But neither should have been entitled to preference based on blackness or whiteness. Yet we still hear the claim of “group rights” that comes in the form of white privilege. And telling a 55-year old factory worker who lost his job to China and his home to foreclosure that he is fortunate because of his white privilege flames the fires of the Politics of Revenge.

In reaction to Group Rights that were put forward under affirmative action, the Silent Majority emerged, then became the Moral Majority, then the Christian Right, then the Tea Baggers and finally, the Alt-Right – each incarnation more vicious and racist than the last. How we did not foresee that Group Rights would result in internecine violence is either testimony to our ignorance or to our capacity for self-delusion.

While prior Presidents recognized they lacked the power to remove the powder keg of Group Rights from American life, Trump was mentally unstable enough to interject nativism and hate into his Administration. How many times does Donny Small Hands need to hear people reject Stephen (Herr Goebbels) Miller before he catches on that things are going in a horrible direction?

Group Rights, aka the Politics of Identity, provides no common ground for people to come together. It is the very definition of the Politics of Division because inherent in Group Rights is an “us versus them” dichotomy. The Deplorables are convinced that all their problems are due to the Blacks, the Mexicans and the Muslims, while the Liberals insist that the Deplorables are the problem. No. The problem is not “them.” As Pogo told us, “the enemy is us.”

Of course, the Alt-Right leads the parade of disaffected whites demanding their quota of goodies to be doled out. They too have adopted the politics of grievances. For them, statue destruction is a form of book burning.

As a nation, we have a lot to learn from the history of the Lee Family. Taking one family member and shoving him into some closet is its own form of nativism in which ignorance holds sway over knowledge. Are we to be like the ancient Egyptians who chiseled away the names of former pharaohs from their obelisks? No, as a nation, we must be strong enough to admit the nature of our true selves and deal directly with tendencies toward violence; we must avoid the trap of anointing ourselves with mythical halos of righteousness.